Voice now available on the TokenPocket app. Access is currently restricted to US citizens, but will be open to more countries gradually as the platform gains more stability...

First unveiled back in June 2019, last week Voice officially beta launched. Before then every EOSIO blockchain or product was created by the EOSIO community.

Voice is a blockchain-based social media application created with emphasis on the users of the platform. Unlike contemporary social media platforms; it would reward social media users instead of using them as products and unscrupulously selling their data.

Voice was created to solve the problems associated with current social media platforms such as fake news, bots, personal information theft, data abuse, cyberbullying, e.t.c. In the current ecosystem, the only people who benefit from the profits that are made from social media are the owners of the social media platforms, and the users who generate the content/value/data, get nothing in return. This is very significant when considering that data is the most valuable asset in the world today.

Giving users a “voice” and a reward for their time, value and content, and ensuring transparency and real identities are the primary aims and unique propositions of the Voice social media app.

By getting rid of the opaque system of one-sided data auctioneering and hidden algorithms, Voice will turn things in favor of social media users and align the interest of the users and the creators of the platform.

Transparency is a core part of the Voice user experience and everyone (users, contributors, and the creators) would be bound by the same rules. Voice is built on the Voice blockchain. Content that goes against the community guidelines can be removed, however, all censorship, just like every other algorithm will be according to already stated ground rules and will be auditable and transparent to everyone. In due time, Voice will be more decentralized and some of the actions will be recorded on the EOS blockchain, making them public.

Voice has a KYC feature for identity verification. The purpose of identity verification is to make sure that every account belongs to a real person and not a bot. This would cultivate the creation and sharing of authentic content on the platform by real users instead of bots and fake accounts. 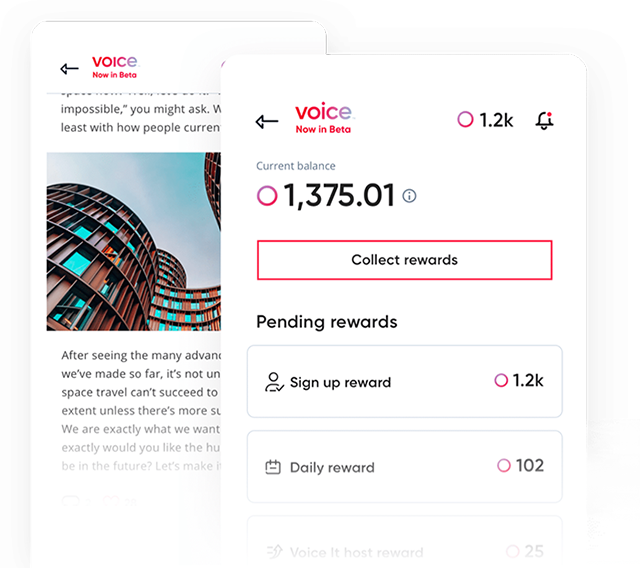 The system is designed to give value back to the users. This reward would come in the form of the VOICE tokens. Users can earn VOICE tokens for expressing themselves and creating quality content.

Tokens can be earned through engagement in the following ways:

Only registered users (KYC) can hold or earn VOICE tokens but all Voice content is available for anyone to view (read-only). Content creators will be able to edit their content in a transparent way.

Block.one, the company behind the EOSIO open-source blockchain software, announced today the formation of a newly formed subsidiary, Bullish Global. Operating as an independent entity under the Block.one parent company, Bullish Global plans to...

Block.one, a software firm specializing in high-performance blockchain technologies & EOSIO developer, today announced that Dao Bull has been named the winner of the EOSIO Beyond Blockchain Hackathon. This hackathon challenged participants to develop...