In conjunction with the announcement of EOSIO Labs, today Block.one has released the Universal Authenticator Library (UAL) repository to explore the future of private key management. UAL is its first step towards explorations in the wallet ecosystem. Block.one is using the release as an opportunity for itself others in the EOSIO developer community to collaboratively push the boundaries of what is possible within the industry and the EOSIO software.

Within the EOSIO wallet ecosystem, Block.one’s interest has been focused on the direction of key and password management. In the realm of blockchain technology, wallets serve a critical role in authenticating users who interact with blockchain applications. To that end, the term ‘wallet’ is potentially misleading if the user’s intention was to ‘authenticate’ with a service or to ‘sign’ a transaction. Since traditional wallets functioned as a place to store tokens, the blockchain community adopted the term ‘wallet’ in the early stages of its development.

However, as the industry focus gradually shifted towards the utility of blockchain applications, storing tokens became less of a focus compared to using applications, and more as a byproduct of utility. Cognizant of this change, Block.one has considered a number of terms that would more accurately describe the purpose of ‘wallets,’ from ‘signature providers’ to ‘authenticators’ to ‘transaction signers’. Ultimately, Block.one decided that for the purposes of this library and future literature in the wallet ecosystem, they will be referring to all ‘wallets’ as ‘authenticators’.

Over the last several months, the Block.one team says it has thought a lot about how EOSIO-enabled applications interface with authenticators, and how that impacts both the developer and user experiences. There has been tremendous growth in the ‘wallet’ ecosystem. Hardware and software authenticators purposefully built for EOSIO as well as migrating to EOSIO from other blockchain and non-blockchain industries have created tremendous value for blockchain application users and the ability to choose an authenticator that fits their needs.

However, with an ever-increasing number of authenticators comes increasing complexity. App developers must integrate with each authenticator (or give up and choose not to), and end users face increased uncertainty — even confusion — as the user experience of signing transactions across various independently operated authenticators diverge. Users may even find that the app they want to use doesn’t work at all with their authenticator of choice.

To address these issues, Block.one’s begun exploring interchangeable integrations for Authenticators through a universal API, the Universal Authenticator Library.

The Universal Authenticator Library (UAL) allows app developers to integrate with a variety of authenticators (wallets, app explorers, key managers, etc.) by coding to a single, universal API. It also offers developers an optional, but opinionated, UI layer so that application users get a consistent look and feel independent of the authenticator they are using or the site they are on.

Once integrated, apps are able to provide their users with an experience akin to social login or single sign-on with very little effort. And as more authenticators are developed, supporting them is as simple as adding a few lines of code. 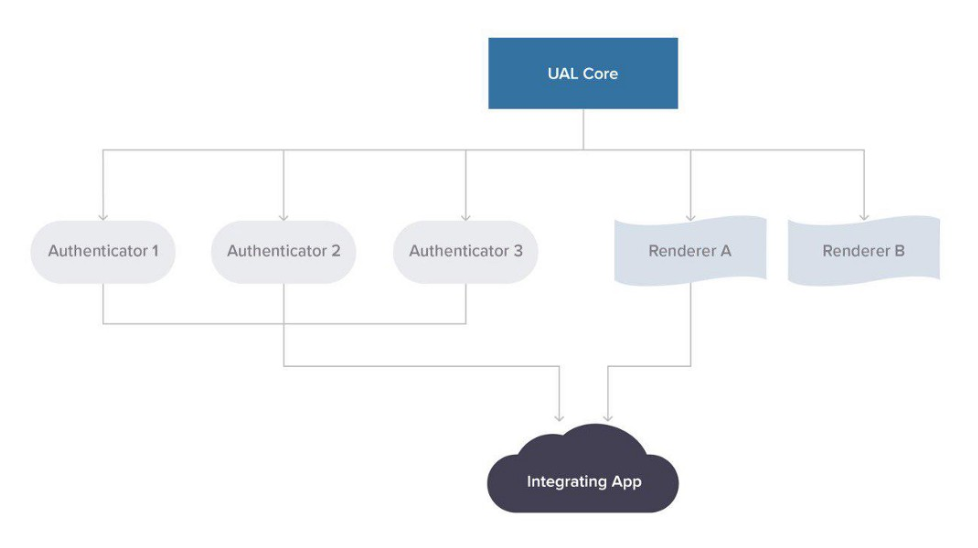 [perfectpullquote align=”full” bordertop=”false” cite=”The Block.one Team” link=”” color=”” class=”” size=””]”The best way to achieve optimized wallet usability is to enable the free market to operate efficiently. Users must be able to vote for the best user experience with their choice of authenticator. This user choice will be the engine that drives rapid improvements to the blockchain user experience. A unifying tool like Universal Authenticator Library will do just that — help developers drive adoption of their applications with a simplified and familiar transaction signing experience, and reduce friction for users so that they have the freedom to use the wallet of their choice. If you are interested in providing feedback and working more closely with our team to improve the EOSIO Labs repositories for developers, you can send our developer relations team an email at developers@block.one.”[/perfectpullquote]

EOSIO is a free, open-source blockchain software protocol that provides developers and entrepreneurs with a platform on which to build, deploy and run high-performing blockchain applications

Block.one, the company behind the EOSIO open-source blockchain software, announced today the formation of a newly formed subsidiary, Bullish Global. Operating as an independent entity...

Block.one, a software firm specializing in high-performance blockchain technologies & EOSIO developer, today announced that Dao Bull has been named the winner of the EOSIO...