The Samourai team informed they will be releasing a direct download APK including Stealth Mode on GitHub in the coming days.

The anticipated and long-awaited upgrade to Ricochet is now implemented– a premium transaction designed to increase the plausible deniability of transactions by adding additional hops of history before the transaction reaches the final destination. The upgrade is called Staggered Ricochet and helps decrease the fingerprint of Ricochet use by hostile exchanges and coin scoring platforms (currently not a known threat, but certainly a possible threat). Staggered Ricochet works by following two simple rules. 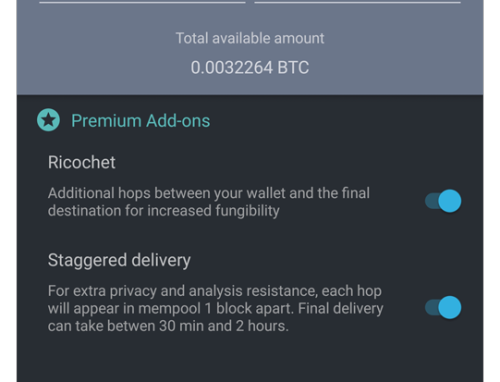 Staggered Ricochet is completely non-custodial, just like standard Ricochet (users can recreate the private keys of the hops at any time) and is available to enable for no additional charge to any Ricochet transaction.

Note: Staggered Ricochet will take significantly longer to arrive at the final destination, so time-sensitive transactions should continue to use standard Ricochet.

A featured benefit of using Samourai’s PayNym technology is the reliable way to avoid reusing addresses (a privacy concern) with the ability to cryptographically generate addresses on behalf of a counterparty without needing to communicate with them (a user experience concern).

For outgoing PayNym transactions from a wallet – transactions a user has sent – they will be able to initiate direct payment to the wallet with the address pre-filled. Users can see how this type of functionality can be developed to encompass reoccurring non-custodial payments without impacting your privacy.

For incoming PayNym transactions into a wallet – transactions a user has received – they will be able to initiate a return payment back to the sender wallet with the amount and address pre-filled. Users can see the power such a feature can enable with a little development, especially for dynamic street merchant use.

Samourai also added the ability to tag any UTXO with a custom value. This can be useful for noting UTXOs that users may want to avoid spending, or the need to add any additional metadata. These tags are local and will be lost if a user restores from the mnemonic + passphrase, so users should restore via their automatic encrypted backup whenever possible. Users can currently tag UTXOs from the Unspent Output list and will be expanded upon in the next updates.

For TestNet users: Samourai has added in PSBT support to complement upcoming Whirlpool mixing and other post-mix transaction types such as 2-Person STONEWALL and Stowaway. Bleeding edge testers will be able to manually compose collaborative testnet Stowaway transactions using the tools found in Settings. The team anticipates advancing this to MainNet in the next releases.

Samourai Wallet, the privacy-enhanced bitcoin wallet app, today announced the release and open sourcing of Samourai Dojo, the back end software infrastructure that sits on top of and augments a Bitcoin Core full node...

Samourai Wallet, the enhanced privacy wallet for BTC has announced new updates to start the year for user interface elements and fee management. Wallet update 0.99 is now available via Google Play for existing...

goTenna, the mesh networking company for decentralized communications technology has announced that TxTenna is now available to the general public on the Google Play Store. TxTenna is a platform that allows for truly decentralized...

Samourai, a privacy-enhanced bitcoin wallet recently rolled out Samourai Wallet update 0.98.75, which is available now for update via Google Play for existing testers, install from Google Play for new testers, or build from...