As a big supporter of SegWit, Erik Vorhees, CEO of cryptocurrency and blockchain asset exchange ShapeShift noted today the platform is now one of the biggest senders and receivers of SegWit transactions.

All BTC deposits on ShapeShift are now SegWit compatible with integration complete and are then subsequently respent as SegWit transactions to other customers which makes their SegWit transaction volume so high.

Vorhees estimates that ShapeShift is responsible for 2% to 3% of ALL bitcoin transactions. SegWit was finally activated on the Bitcoin protocol in August of this year after a supermajority of miners began signaling for it.

Once this occurred, ShapeShift engineers scheduled it to be integrated into its software, and this work has now been 100% fulfilled.

Developed primarily to solve a long-standing vulnerability in Bitcoin (transaction malleability), it also had the side effect of providing more on-chain capacity (somewhere between 1.4-4x, depending on how it’s used).

Since being activated, SegWit transactions are now making up around 8% of all bitcoin transactions, see chart below: 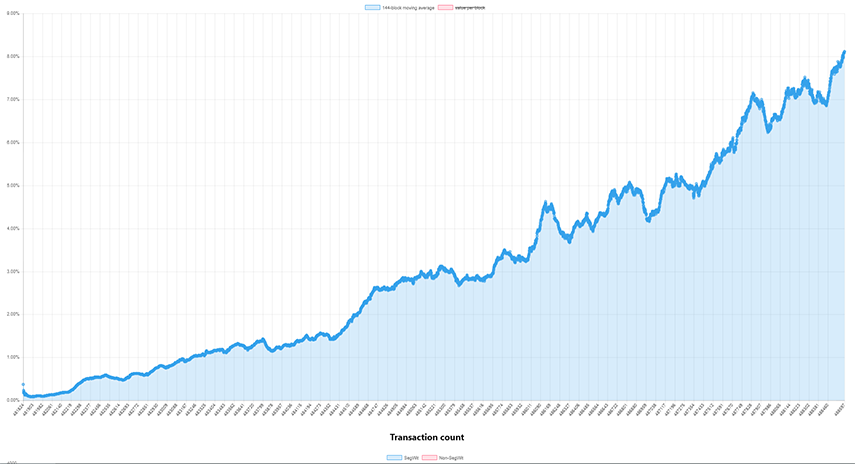 “We look forward to further adoption of SegWit on the Bitcoin network, and strongly encourage other companies to integrate it into their software. We also want to give Pieter Wuille considerable credit for originally designing and proposing Segregated Witness, one of the Bitcoin protocol’s most important upgrades.”

ShapeShift, the popular non-custodial cryptocurrency platform, announced today that it has begun dismantling its corporate structure and decentralizing governance to its users via its FOX token. In a multi-step process (beginning with the airdrop),...

ShapeShift, a non-custodial cryptocurrency exchange platform, today announced it has enabled cross-chain swaps via THORChain and Ethereum-based DEX trading on their web platform. These capabilities were previously made available on ShapeShift’s mobile app, and...