Bitcoin Breaks Out to All-time Highs as Momentum Accelerates

Bitcoin broke out in mid-April 2021 to fresh all-time highs after consolidating in a sideways range for two months. You can see following the prior breakout in mid-February of 2021, prices rallied in an upward trend and then started the process of consolidation. The initial impulse rally in bitcoin trading following the breakout was 21% to the highs seen in February and then 36% to the high close seen in March. While bitcoin’s price did fall in February below the closing on the day of the impulse rally, prices remained above the 50-day moving average and an upward sloping trend line, keeping the trend in place.

If bitcoin’s price repeats the moves it achieved following the last impulse rally, prices would hit 76K and 85K, respectively, as the price trends to an initial high and then another all-time high. The impulse move seen in the middle of April looks to be on solid volume, which would lead one to believe that the upward bias would be similar to the rally seen in February.

Support and Resistance on Daily Charts

Short-term momentum has also turned positive as the fast stochastic generated a crossover buy signal. The fast stochastic, a momentum oscillator that measures accelerating and decelerating speed, moves higher with an upward trajectory which points to positive momentum. The current reading o the fast stochastic is 84, which is above the overbought trigger level foreshadowing a potential correction. The relative strength index, a momentum index that identifies accelerating and decelerating momentum, is also moving higher. The RSI has yet to make a new high and is far from overbought levels. The current reading on the RSI is 67, below the overbought trigger level of 70, which shows that prices have more to rise before they become overbought.

The weekly chart of bitcoin shows a similar breakout. The upward trajectory of price action looks more pronounced on a weekly chart. Prices are following an upward sloping trend line as well as the 10-week moving average. Bitcoin prices have not closed below the 10-week moving average since March of 2020, more than 13-months ago. This scenario tells you that if you can purchase bitcoin at the 10-week moving average, the likelihood of a successful trade is substantial. Bitcoin prices retested those levels in both January of 2021 and March 2021 after the last impulse breakout. Support is seen near the 10-week moving average, which coincides with an upward sloping trend line that comes in near 55,575. Short-term weekly momentum has turned positive as the fast stochastic generated a crossover buys signal. The current reading on the fast stochastic is 95, well above the overbought trigger level of 80, foreshadowing a correction. The relative strength index has also turned higher, but the low level of the RSI concerning the recent highs shows that prices have been consolidating. The current reading on the RSI is 75, above the overbought trigger level of 70, foreshadowing a correction. Medium-term momentum is decelerating. The MACD histogram is printing in positive territory with a declining trajectory which points to consolidation. The MACD line appears to be slowing and moving sideways, which should change if the breakout holds. 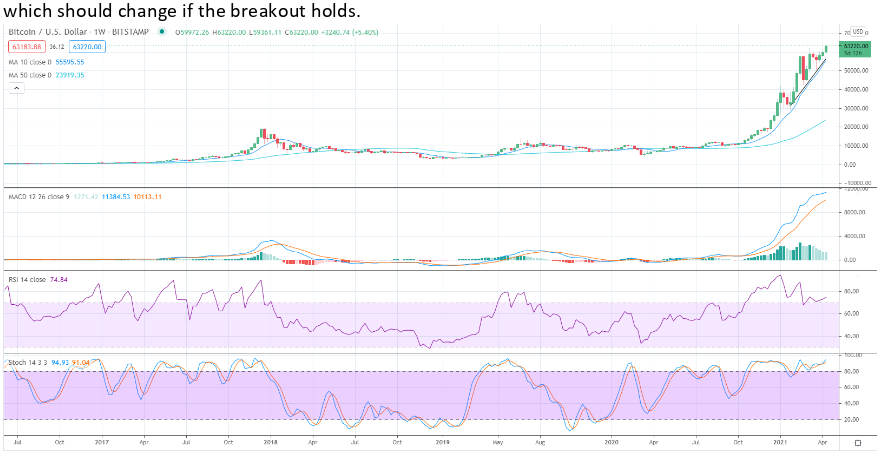 The upshot is that bitcoin prices have broken out to new all-time highs. The bitcoin prices surged during the last impulse move and then rallied another 21% and 36% before it started to consolidate. During these rallies, there were opportunities to purchase bitcoin near support levels. Momentum is powerful on a daily chart, but prices are overbought and could retrace slightly after this initial impulse move. Medium-term momentum is less robust as prices have just recently broken out after consolidating for two months. Look for bitcoin prices to continue to trend higher, potentially testing support levels and holding the upward trend of the 50-day moving average as it tests higher price levels.

South Korean blockchain corporation ICONLOOP, announced today it has signed a strategic partnership with the ICON Foundation and 2bytes to establish ‘SPERA’, a blockchain-based interchain NFT game platform, and has released a teaser site...

Shakepay, a Canadian-based exchange platform for bitcoin (BTC) and ether (ETH), announced it closed $44 million in Series A funding. The round was led by QED Investors, a US-based venture capital firm. "We love...

METACO, a provider of security software and infrastructure to the crypto-asset ecosystem, has announced that Union Bank of the Philippines will deploy its digital asset management solution. Moreover, UnionBank is deploying services on IBM...