The team of Everett, an open protocol for creating fungible staking positions, announced today the public beta release of Keplr Extension and Keplr Web. For Everett, Keplr represents the “transition from the Cosmos use-case of staking applications and features that exist within the ecosystem.”

“Much of the work in unifying the interchain ecosystem has been done by wallets. Yet, the emphasis has primarily been on staking & token transfers. We fundamentally believe that the Cosmos ecosystem is maturing to the point where use-cases beyond staking are taking shape. From creating a multi-asset collateralized USDx stablecoin with Kava, uncensorable social networks built by Forbole, interest-bearing fiat-backed stablecoins by E-Money and many more, we are reaching the point where staking is just a small part of what defines the Cosmos ecosystem.”
– The Everett team

Keplr Extension – an open-source browser extension wallet that supports the CosmosJS signing library. The ultimate goal for Keplr Extension is to duplicate the simplicity of using MetaMask on Ethereum on Cosmos; enabling users to access all Cosmos dApps using just one wallet.

In the near future, the plan is to add features such as: 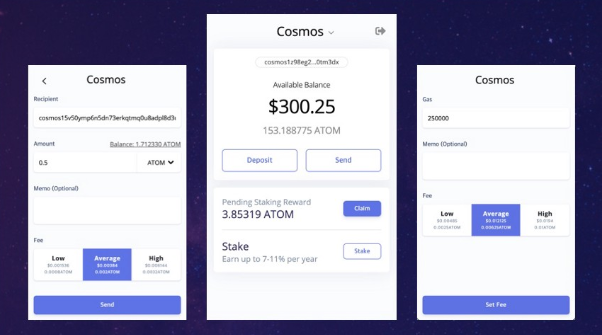 Keplr Web – the goal with Keplr Web is to allow users to access all applications in the Cosmos ecosystem through one unified portal. As some of the applications are undergoing the testnet phase, Keplr Web only supports staking for Cosmos Hub and Kava. This will soon change as each application begins to ship its product. 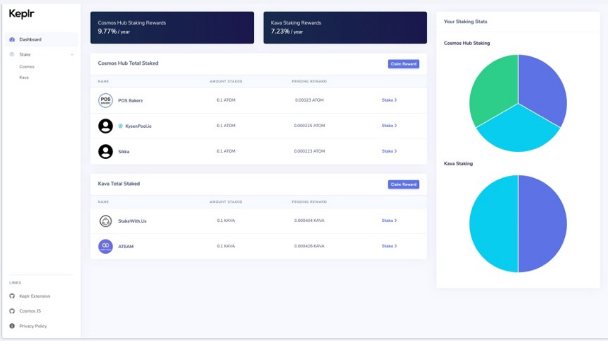