HIVE Blockchain Technologies Ltd. (HIVE), an operator of cryptocurrency mining facilities, today announced its results for the fourth quarter and full-year ended March 31, 2019 (all amounts in US dollars, unless otherwise indicated).

“Over the past year, HIVE has undergone significant changes which have improved transparency and accountability from strategic partners which will allow us to better manage our business. We weathered a challenging period for cryptocurrency and blockchain companies as the value of Bitcoin and Ethereum underwent tremendous erosion of value causing a massive fall in the cost of computing equipment. However, we opportunistically added Bitcoin capacity at attractive financial terms. Since becoming interim CEO and adding a full-time CFO, we have restructured the company to strengthen our operational control of HIVE and improved our cost structure. There is more to be done but I am certain that the work done during the fiscal year and throughout 2019 has better positioned the company for growth. We are pleased by the financial results from our 300 Petahashes of Bitcoin mining capacity and the progress we have seen in our Ethereum mining following the restart of Sweden with Blockbase, our new operational partner, subsequent to the end of the 2019 fiscal year.”
– Frank Holmes, Interim Executive Chairman of HIVE 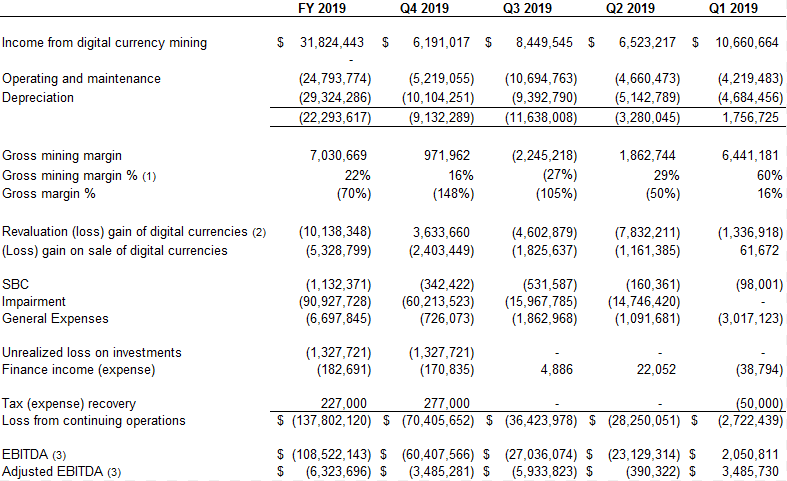 HIVE Blockchain Technologies, an owner and operator of cryptocurrency mining facilities, announced today that it has initiated an expansion of its flagship GPU-based mining facility in Sweden. This expansion is anticipated to result in...

HIVE Blockchain Technologies (HIVE), an owner and operator of cryptocurrency mining facilities, announced today it has experienced a more than 20% increase in newly minted ether (ETH) coins mined daily compared to its exit...

HIVE Blockchain Technologies (HIVE), an operator of GPU-based cryptocurrency mining resources in Iceland and Sweden, today announced that it has entered a strategic partnership with Blockbase Group DWC-LLC (Blockbase), as the new software operator...

HIVE Blockchain Technologies and Genesis Mining, today announced that they have reached a settlement agreement which positively resolves prior misunderstandings and disagreements. The agreement was reached with a focus on initiatives which improve communication,...