50% of bitcoin wealth is controlled by 0.023% of wallet addresses - compared to 50.1% of global wealth controlled by 1% of the world’s population

PARSIQ, the blockchain monitoring, and intelligence platform, has today announced the results of its study on the distribution of cryptocurrency wealth across the top five cryptocurrencies.

It has found that bitcoin wealth is concentrated in a relatively small number of wallet addresses, and this number hasn’t changed significantly in years.

Cryptocurrencies were created with the desire to create a more egalitarian society away from government manipulation and centralized control.

However, the latest research from PARSIQ has found that cryptocurrency wealth is controlled by a small number of early adopter and exchange-owned “whale wallets.”

Across the top five cryptocurrencies by market capitalization, the most concentrated is Ripple, with half of XRP controlled by only 14 wallet addresses, just 0.001% of the total funded wallet addresses. However, Ethereum isn’t far behind with 346 wallets consisting of 0.003% of wallet addresses.

The minimum number of bitcoins required to enter the elite of the top 50% of bitcoin wallet addresses is 347 BTC, or around $3.8m equivalent. On average, these wallet addresses have been in existence for just over two years, so much of the accumulated wealth pre-dates the surge of interest in late 2017.

In its first few years, bitcoin wealth became gradually more distributed, but this accumulation has not changed significantly in two years (see chart below), and to some extent has gone into reverse. Ethereum and Litecoin have also been relatively stable, although far fewer wallets control half the wealth with these cryptocurrencies – 346 and 180 wallet addresses respectively.

Bitcoin Cash is the exception to a stable two years. It has seen a significant concentration of wealth since the hard fork that created it, as large holders of BCH cashed in on their holdings.

The real story is that although mass media interest in 2017-2018 has brought significant interest, very little has changed under the surface. The whales are still holding cryptocurrencies long-term and still have the ability to move the markets. 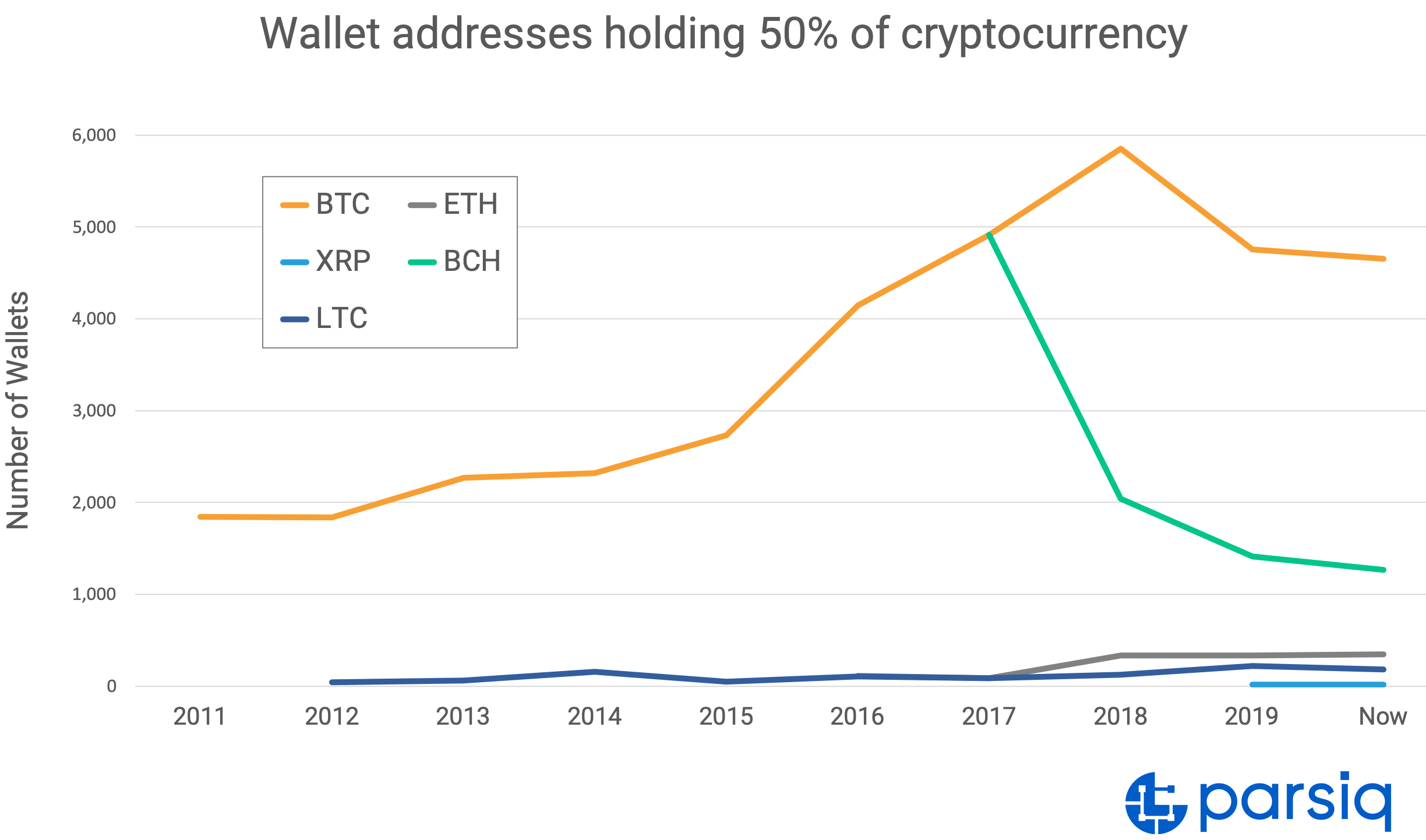 “Right now, just 6,457 individual wallet addresses hold fifty percent of the entire cryptocurrency wealth of all the top five cryptocurrencies. Excluding bitcoin, that number drops to 1,805. The individuals and organizations which control these addresses hold a huge amount of influence, and their power goes mostly unchecked because their activities go largely unchecked.”

“The fact is, the transparency that’s part of the DNA of cryptocurrencies has been clouded by the size and complexity involved in analyzing these cryptocurrencies. It’s time to open up the blockchain to everyone, to encourage fairer wealth distribution, or at least ensure the whales are more accountable through better monitoring.”

PARSIQ, a blockchain infrastructure platform, announced earlier this week it has closed its $3 million Series A funding round. The round was backed by the Solana Foundation and Axia8 Ventures. In addition, participation came...

PARSIQ a blockchain monitoring and workflow automation platform that serves as a multi-level bridge between blockchains and off-chain applications has announced it has integrated Chainlink's price feeds live on Binance Smart Chain (BSC) The...

PARSIQ, a real-time blockchain intelligence, and activity platform, has announced it will provide compliance and monitoring features to Dash, a blockchain-based cryptocurrency focused on payment solutions with thousands of merchants and USD $1.52 billion+...