Published by Pedro Fernandes of LightningNetworkStores.com

LightningNetworkStores.com aims to accelerate the adoption of lightning network payments by exposing the best places to spend bitcoin through lightning. We have 99.95% up-time since February 2018 and are the most comprehensive repository of stores that accept lightning with almost 1 bitcoin over lightning spent on votes/ratings. The website is fully automated, stores can be added and updated without any registration or any manual step, the only thing we do is remove stores that stopped accepting lightning, have closed or are scams. We don’t take donations on purpose because we prefer that people vote on their favorite stores. It’s also a great way for merchants to get inbound capacity from our very well connected node (Acinq’s node – they process our payments) while promoting themselves.

By the 23rd of February 2018, there were only three online places where you could spend bitcoin through lightning: Torguard, Blockstream shop, and Y’alls. However, we knew that this list was going to grow and it would be easy to lose track of these stores. We created a very simple HTML page, hosted on GitHub, where everyone could add new stores that support lightning. Then we noticed that many lightning nodes used, as the name of their node, the URL of the website they were running. In response, we made a script that regularly checked whether the names of all the new nodes were a valid URL, and if so, we would manually check if they were accepting lightning payments. With this script and the contributions from the community, we quickly became the most complete repository of lightning stores and other initiatives that later appeared to do the same thing quickly died out.

There was a big problem though, some stores were clearly not relevant for the community. As an example, there was an ugly-looking website that just sold peanut butter and shipped it within the UK, that was it. We wanted to somehow slightly hide this and other less relevant stores without offending their owners or create a subjective classification, we all know how the bitcoin community hates authority. So we created a classification of big and small stores: big stores sold at least 10 products or were in the top 1 million websites according to Alexa. This was a bit controversial, however, because the Alexa rank can be easily manipulated and for stores that sold services, it was not possible to count products. In June 2018, when Acinq published their API solution to process lightning payments, we had the idea of just adding the possibility to Reddit-style vote on stores with satoshis. It would make things easier for us, as we wouldn’t need to do authentication and it would support further development if we get paid on top of it. Reddit posts can also be easily manipulated by voting with throwaway accounts, but if voting requires a payment, it’s a bit harder, we thought.

And so we added the possibility to vote on stores with satoshis at the start of July 2018. Around this time, Coingate enabled lightning payments for some of their merchants and a lot of new stores needed to be added. In order to save time, we added a tool to automatically add a new store upon paying an anti-spam fee of 1000 satoshis. As the number of stores grew, even more, we added the possibility for website owners to edit their information on the website. We became a fully automated repository of stores, only the rare removal of stores needs to be done manually.

How we position ourselves in relation to other merchant directories

From the beginning of 2018 it was clear to us that most of the lightning network economy would be online, this is, most goods/services would be immediately delivered or shipped as opposed to the customer having to move to a physical store. With on-chain bitcoin, it’s already hard to find a store nearby, let alone with lightning.

We see ourselves as the online counterpart of coinmap.org, where only websites that take bitcoin through lightning are accepted. As shown in the pie chart below, only 5% of our listed venues accept lightning at a physical location:

Of course, adding a world map with lightning merchants is a possibility but doing that now would be reinventing the wheel as coinmap.org only needs to add a field saying whether the venue accepts lightning payments or not.

Adoption of lightning by merchants

Measuring adoption is not an easy task. Many people like to use the total number of bitcoin merchants as a metric of adoption but this metric is usually hard to use in practice because privacy laws don’t allow payment processors to publish a list of their customers. Defining what is a merchant that accepts bitcoin/lightning is also very hard. Coingate announced that it enabled lightning-network payments for more than 4000 merchants (https://bit.ly/2X8XqtT) but then announced it had only processed 700 lightning invoices in about 10 months (https://bit.ly/2W630kc). This means that at 3300 merchants that had lightning payments enabled didn’t receive any lightning payment, can they even be considered a lightning merchant in this sense? 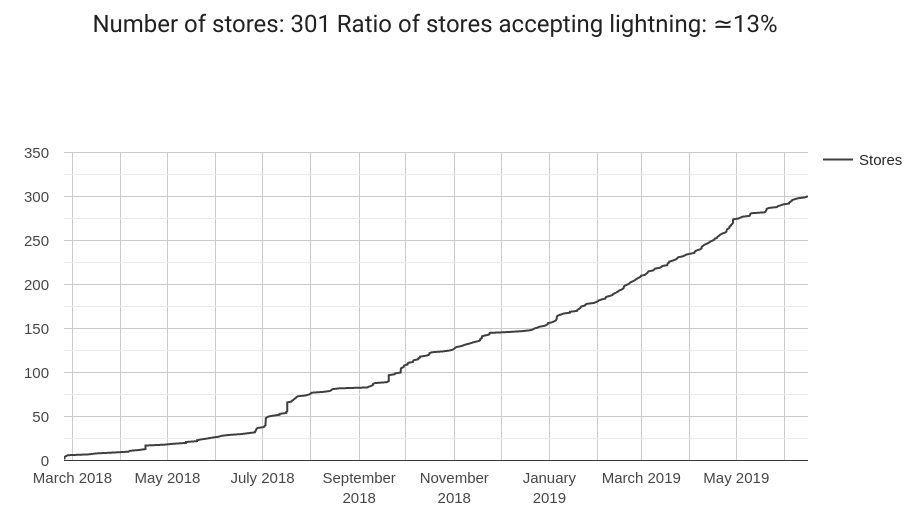 The best use cases for lightning 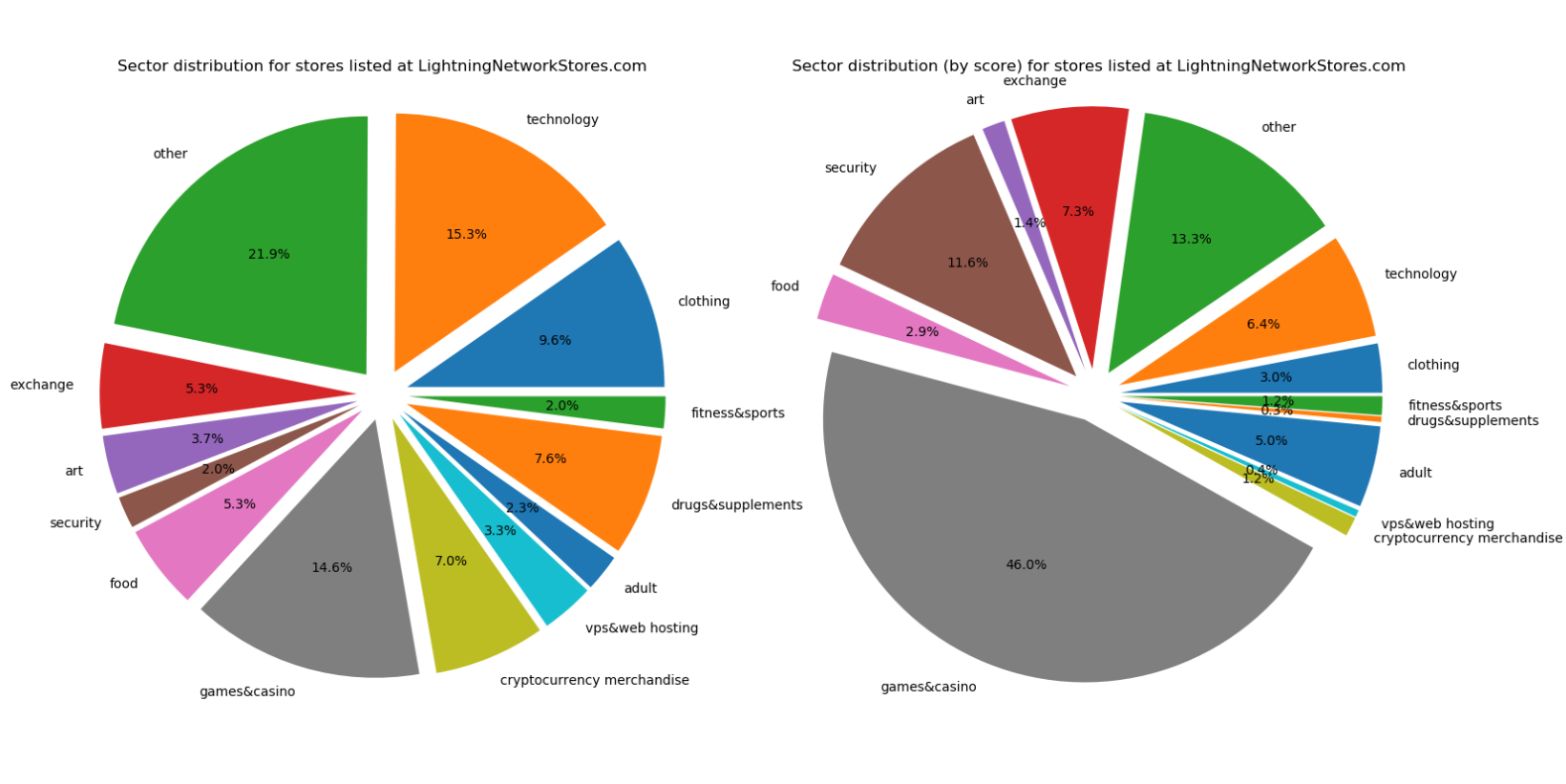 What catches our attention immediately is that games and casino venues score very well. This is not surprising as fast micro-payments are very suitable for this type of services, people want to play many times and waiting for on-chain confirmations is just boring.

The graph below shows the number of paid invoices and the total number of votes cast on the website (in millions, 1 vote = 1 Satoshi). 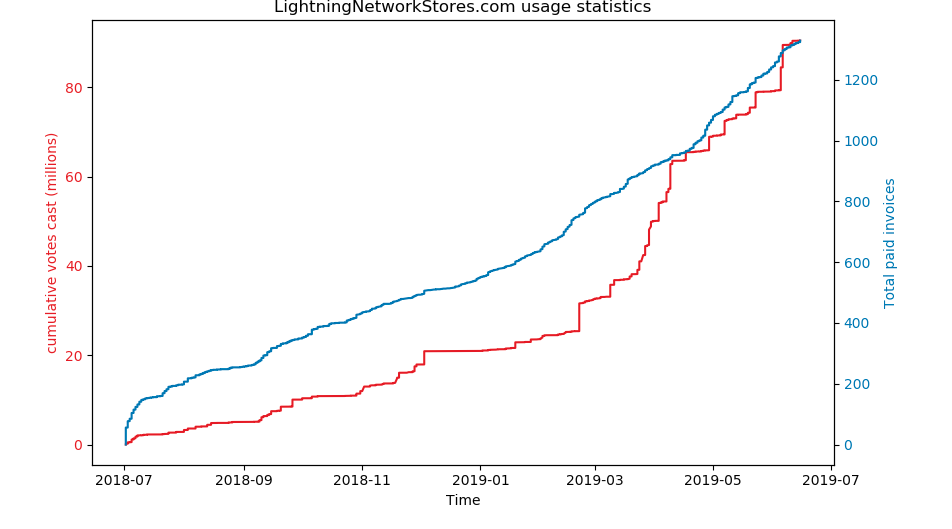 We can see that initially there were many people voting small amounts but then the voting became dominated by large payments, probably made by the merchants aiming to promote themselves. This is why we have recently added the possibility for users to write reviews, it encourages users to participate as their opinion is always heard.