The wallet allows users to create Ethereum accounts as well as receive and send Ether and ERC20 tokens in just a few clicks. Parity Fether paves the way for developers to embed light clients in their applications instead of relying on centralised nodes to access the Ethereum blockchain. 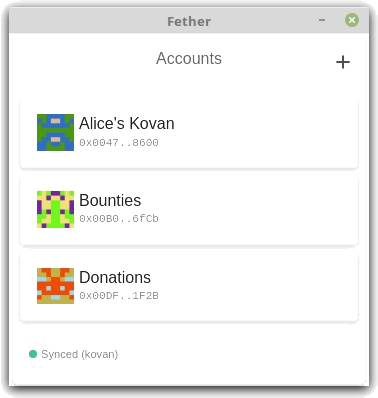 Fether wallet runs Parity Ethereum light client in the background if no other node is found running on the machine. Fether allows reaching the top of the blockchain in a matter of minutes. the Parity team says it is still working hard to bring syncing down to a few seconds, which can be achieved in tandem with further light client updates to Parity Ethereum.

Because the code has yet to be audited, Parity advises not to use Parity Fether on the Ethereum mainnet or use it for anything other than test usage. Upcoming releases of Fether will focus on stability and user experience improvements, including adding BIP39 seed phrase support and Parity Signer integration.

To lower the barrier to entry to developing with light clients, Parity developed a high-level reactive javascript library called Light.js, specifically created to easily develop front-end applications that interface with a light client. It abstracts specific aspects of the development to let developers concentrate on their application’s logic. While building applications relying on a light client is very similar those relying on a full node, light.js helps Dapp builders use the best development patterns.

Stafi, a decentralized protocol that provides the liquidity for Staking assets, today announced that it has become a member of the Substrate Builders Program. Parity, the organization behind the Program, wants to create a...

Web3 Foundation and Parity Technologies have teamed up with Wanxiang Blockchain Labs and New Chainbase to launch a Web 3.0 Bootcamp, a joint venture to accelerate blockchain projects in China and put them on...

Substrate, Parity’s platform for building blockchains, has now introduced a new resource for developers using their framework. The Substrate Builders Program will provide systematic access to support from Parity and intends to build a...

The team of Polymath, a platform for security token issuance and management, declared back in March of this year during Consensus New York, that it had begun work on building a new base layer...