LEXIT, an Estonian startup developing a platform on which entire companies, specialized departments, and their Intellectual Property (IP) can be bought, sold and licensed, has officially released its whitepaper.

LEXIT is the first platform of its kind, allowing participants to trade IP assets “as conveniently as one would buy, sell or rent a car or real estate.”

Commenting on the release, LEXIT CEO Amir Kaltak, stated: “Utilizing a platform approach, blockchain technologies, and an international network of business partners, LEXIT aims to increase the efficiency and liquidity of the corporate asset market in the same way eBay did for peer-to-peer commerce and Airbnb did for short-term renting.”

Mergers and Acquisitions (M&A) is considered to be a highly complicated field. Involving batteries of corporate lawyers, investment bankers, financial advisors, and appraisers, selling a company or assets thereof entails very high costs, even before the first potential buyer is contacted. The Platform approach, detailed in LEXIT’s Whitepaper, seeks to simplify this process, rendering the M&A market more accessible to small and medium-sized players.

Kaltak continued: “The LEXIT Solution allows for M&A processes to be concluded faster, at about a quarter of the traditional costs; entrepreneurs are empowered to discover the true value of their assets on a vibrant and highly liquid marketplace, without having to bear excessive fees. This will allow many new players to enter the field, like small startups wishing to capitalize on assets they own but don’t plan to use – such as projects they pivoted on”

According to LEXIT, the described increase in efficiency and lower costs are made possible by combining blockchain-based token economics and best practices developed by the platform-marketplace industry.

“We developed an M&A marketplace on which, for the first time, buyers, sellers, and professional service providers meet directly, en mass, allowing market forces and network dynamics to render corporate assets into highly liquid resources. The parties can negotiate fairly in a transparent market environment, while a distributed network of independent assessors and legal experts competes to offer them high-quality Due Diligence services at affordable prices. The result is a one-stop solution at which everything buyers and sellers need to achieve good, win-win deals are provided: appraisement services, legal support, and secured communication channels.”  Dr. Jason Corbett, LEXIT CSO. 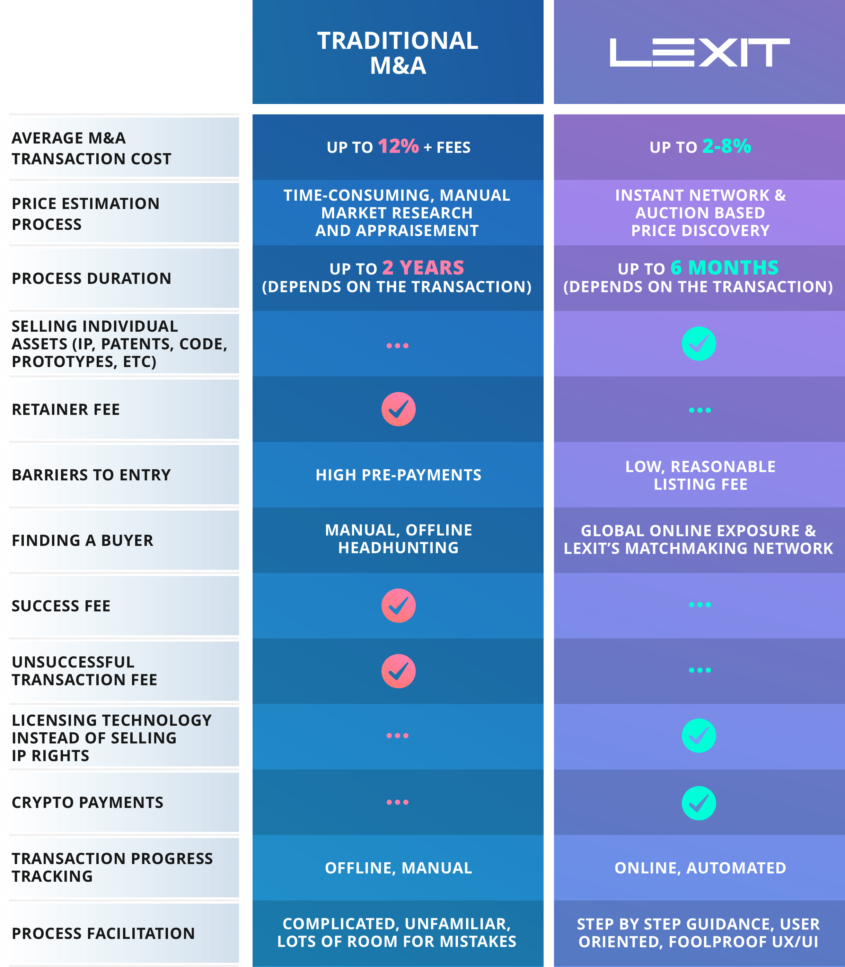 LEXIT, a distributed IP and M&A marketplace powered by blockchain today announced the launch of LexICO, a crowdsale solution for projects of all sizes. LexICO aims to offer founders a full solution to run...

LEXIT, a digital M&A marketplace, and Metaverse, a leading public blockchain, announced today they are teaming up to transform the way developers and organizations of all sizes transact IP and whole or partial businesses....

Metaverse and LEXIT to collaborate on the tokenization of IP