Breadwallet, the first standalone bitcoin wallet to be added to Apple’s App Store and the number one decentralized bitcoin wallet by downloads is becoming more than just a wallet, and to reflect that, the company is dropping “wallet” from its name. Breadwallet is now simply Bread. Further to this news, the company has announced the launch of a brand new iOS app today, rebuilt from scratch, with a new look and added features.

The new design is optimized to be even better for new users, making it easy to discover useful features and to more quickly understand how bitcoin works. Most screens feature a help icon in the top right that will allow users to see an explanation of the screen they are looking at with a single tap, and just as quickly let them return to where they left off. And for experienced users, advanced features are now more easily accessible without complicating the interface. The company says, “this is all a result of listening to user feedback and ensuring that commonly-used flows are simple and intuitive.”

More advanced users will be happy to learn that Bread has added the ability to display the bitcoin balance both in bits as well as full bitcoins, and network transaction fees can now be modified to be either fast or cheap, depending on user needs. Another popular new feature is the ability to save a memo together with every transaction users send or receive, so it can be noted specific details for later reference. These memos are not saved on the bitcoin network, they will remain in user’s Bread app even if they restore their wallet when replacing their phone.

“Using bitcoin doesn’t have to be complicated, and we strive to provide a user experience that makes it easy for any new user to jump in and get started. The cryptocurrency landscape has evolved considerably since we first launched three years ago. We have been busy preparing to support a user base that is increasingly interested in a wider range of services than simply sending and receiving bitcoin. In the coming months, we will be adding more financial services in a range of geographies, as well as support for more crypto assets that complement bitcoin. These are only the first steps towards building a powerful financial platform that can be used around the globe.” 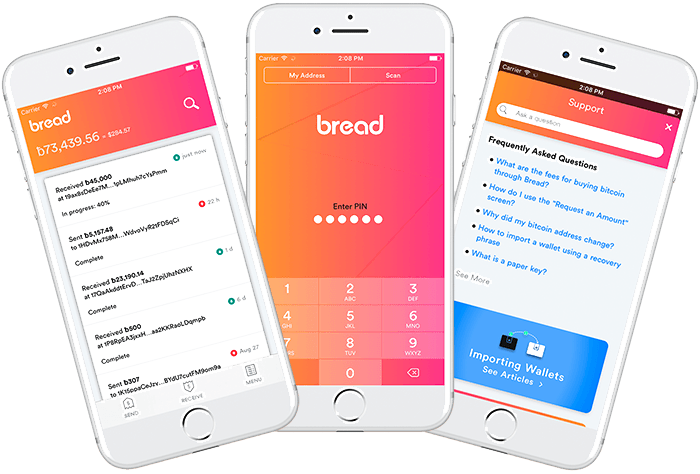 The team of mobile cryptocurrency wallet BRD, announced today that it has entered into a strategic partnership with Xpring, Ripple’s development initiative. Xpring will invest $750k in BRD, which will enable wallet users to...

BRD, a bitcoin and cryptocurrency mobile wallet today announced they have successfully raised $32 million to fuel customer acquisition and introduce a rewards program concept. The $32 million was raised from a combination of venture...

BRD, a cryptocurrency wallet application service for iOS and Android today announced its “Augustus” release is finally here. The BRD team said that this release marks its "biggest update ever and marks a major milestone...

The updated version of the Bread app sports a modular framework and is built from the ground up which enables Bread to add multiple digital assets to the platform, of which Bitcoin Cash is...