COMSA will debut its own ICO in October, which will be followed by Premium Water Holdings and CAMPFIRE, Inc.; two more ICOs slated to launch on the COMSA platform within the coming months.
COMSA aims to address current uncertainties held by the ICO process. By working as a full-fledged ICO fundraising service, COMSA will exercise a totally streamlined process of token offering, sale, and distribution, and subsequently listing on an exchange on one efficient platform.

Tokens raised from the COMSA token crowdsale will go towards Tech Bureau’s future expansion to broaden its reach in the growing ICO market. Additionally, Tech Bureau plans to accelerate the growth of its existing core businesses; its own cryptocurrency exchange, Zaif, and their private blockchain product, mijin. Both Zaif and mijin will be core elements of the COMSA solution.

“COMSA showcases the whole spectrum and versatility of the NEM blockchain solution and how it can help make the ICO process more transparent and streamlined.”

It should be noted that NEM also recently announced the launch of its own crypto only exchange. 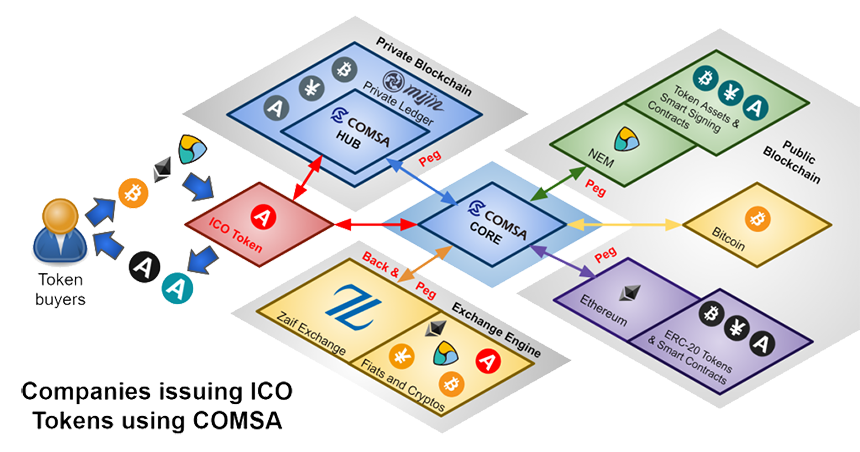 COMSA will enable trustless transactions in native currencies to eliminate the need for 3rd party agencies such as escrow services. Any token issued on the COMSA platform will be able to integrate seamlessly to both the NEM and Ethereum public blockchains. Also, COMSAs solution offers service design in blockchain technology, ensuring all users understand their ICO process.

“COMSA will only create decentralized projects with proper use-cases and application to the blockchain world. Existing business entities will not need an ICO to utilize this platform. They can introduce their fundraising and blockchain technology and later build a solid business model. COMSA is a one stop shop solution for token creation and exchange.”

More information about COMSA, its committee members, and its ICO project are available on its website.

Today Tech Bureau Holdings, Corp., a fintech and cryptocurrency solutions company, announced it has limitedly released the COMSA HUB beta version (testnet) today, which is part of the software development business for the COMSA...

Today Tech Bureau, a fintech and cryptocurrency solutions company, announced a PoC (Proof of Concept) project with The Japan Net Bank, Limited, the very first online bank in Japan. The main aim of the...