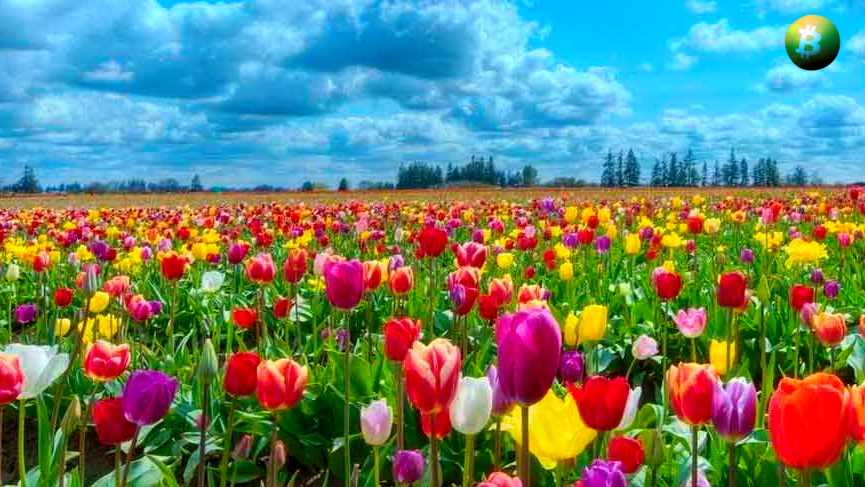 As the crypto universe continues its expansion at light speed, the metaphoric attempts to describe the meteoric rise in market capitalization and investment have also entered orbit.
“Tulip mania.” “Worse than tulip mania.” “At least you got a tulip at the end.” – Retired Head of Dutch Central Bank
“More akin to Nasdaq than gold and not a safe haven asset.” – CNBC
“Bitcoin balloons on overheated air.” – Bloomberg
With all innovation comes fear and doubt. With all innovation comes the magical excitement of what could be. Growth knows no limits. Markets know no limits, except for zero on the downside.
Markets constantly overshoot on the upside and overshoot on the downside. It happens on a small scale every single day in almost every single market. Every buyer or seller at any given time needs to match up with a counterparty. When a buyer or seller wants to transact in the moment, with time sensitivity, the slippage in price often increases.
As more buyers and sellers have entered the cryptocurrency marketplace with greater speed and greater amounts of funds, the swings in price have increased and will most likely continue to do so. This is not a mature market like the S&P 500 futures or USDJPY currency pair, far from it.
Liquidity plays such a large role in markets and even the deepest and most well-capitalized markets on earth experience giant lapses in liquidity at times.
Those progressive financial entities that started providing liquidity in the cryptocurrency markets years ago have benefitted greatly from the vast increase in transactions in cryptocurrency markets. While price action has been rather muted in most other global markets, cryptocurrencies have delivered tremendous volatility.
Imagine if you decided not to invest in Amazon.com stock in the late 1990s because Pets.com stock was “worse than tulip mania.”
Just as Lycos was purchased for over $12 billion in 2000, only to be sold for under $100 million is 2004, a similarly valued company called Google now has a market cap of close to $700 billion.
When thinking about investment into cryptocurrencies, blockchain tech, and other crypto or blockchain ecosystem entities, do your own due diligence and do a lot of it. Read about the people in positions of influence. Research the companies and investors that are putting their resources behind these entities. Learn about the individuals in charge of making the key decisions.
There will be many winners in the crypto universe. It is safe to say there will be many more losers as well. Fortunes will be made and fortunes will be lost. The market capitalization of the top 20 cryptocurrencies is currently less than $75 billion. While this is a very large sum of money, it would not be shocking to see this number increase 10-fold or even 100-fold.
No one can say what the financial marketplace will look like in 2020, let alone 2050 or 2100.
Some of the most brilliant minds on earth are investing all of their time, energy, and resources into this space, and we have witnessed real progress in a relatively short amount of time. Find the visionaries you believe have the best odds to succeed because some of them will indeed become legendary.