Reviewing the Prokey Optimum — a promising contender in the cryptocurrency hardware wallet market that is growing fast because of ease of use, unique security features, and competitive price. it only costs $59! Here’s what we think.

The Prokey Optimum hardware cryptocurrency wallet is an open-source, safe, and secure cold storage solution best used by every crypto user. Not only are the interfaces user-friendly and simple, having an all-in-one platform for thousands of coins and tokens is a must-have for both novice and veteran cryptocurrency traders and HODL-ers alike.

Get yourself a Prokey Optimum right now by clicking this link!

Prokey Optimum: What’s in the Box? 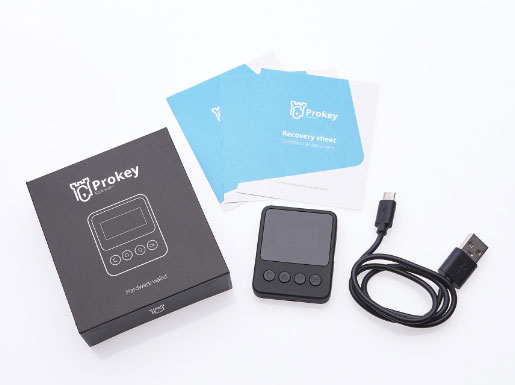 Purchasing a brand new Prokey Optimum will get  you:

One of the primary features that make the Prokey Optimum hardware wallet stand out from the competition is that it doesn’t need to install any application or extension on your computer and works via the WebUSB feature which is available on Chrome-based browsers like Google Chrome, Brave, and Microsoft Edge.  Also, the wallet natively supports thousands of coins and tokens to minimize using 3rd-party wallets and phishing risks. This feature makes Prokey the only hardware wallet that natively supports USDT on both the Ethereum and OMNI protocol blockchains.

If you’re in the search for a hardware wallet that has an all-in-one platform with native support of many coins and tokens inclusive of USDT, the Prokey Optimum is a great choice. It can also provide you with that much-needed platform that can store and manage an entire altcoin portfolio.

Users will find holding the device in hand to be comfortable and familiar with its compact and rounded-edges design. With an LCD screen and 4 on-device buttons to navigate the on-screen interface, the Prokey Optimum thrives on its simplicity in design as much as its security features (which will be talked about later in this review).

Connecting the Prokey Optimum to a computer is as easy as it gets. It uses a USB Type Micro-B connector so you can just connect it using any regular USB cable. 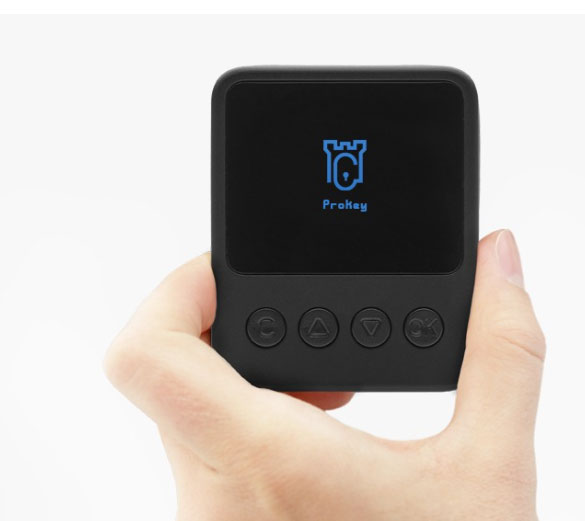 The Prokey Optimum is a hierarchical deterministic hardware wallet (BIP39). Users are able to import and export recovery seeds from and to many other compatible wallets 100% offline. What this means is that even if a Prokey Optimum breaks down, users are still able to access their funds by using their recovery seeds on a new device.

In the case of protection from non-physical manners, the Prokey Optimum uses both PIN codes and passphrases on top of the levels of security it already has. The passphrase feature combines the phrase with recovery seeds to allow the creation of several hidden wallets per user.

You can look at a cryptocurrency hardware wallet as a bank deposit box that you store your most prized possessions. As with such a metaphor, a deposit box is only considered safe when it’s equipped with the finest security and safety features. A cryptocurrency hardware wallet employs the highest grades of encryption to prevent itself from being hacked or accessed by none other than the owner.

The Prokey Optimum cryptocurrency hardware wallet guarantees the safety of your crypto assets by using layers of protection. One of them is by storing private keys offline (on the device) and the other by signing transactions on different hardware from the computer that you are using. What this means is that even if your computer has a security breach, your assets are still safe behind your private key, which is on the device.

A core feature of the Prokey Optimum is its secure firmware. By only enabling firmware installation and updates with mutual authentication from their servers, Prokey eliminates all possible supply-chain attacks. You won’t need to look out for an untempered hologram seal or even confirm a vendor’s reputation as a reseller. By purchasing a Prokey Optimum, you get it in its raw format and you yourself will do the installation and update.

Users won’t need to go through the hassle of using third-party wallets for certain coins and tokens when they can manage all of them in a single wallet.  Everything’s easier and safer when it’s all in one secure and safe place.

Ever gone through the process of downloading extra apps and software to cater to a simple procedure or setup? The Prokey Optimum runs everything on its web interface on Chromium-based browsers, allowing users to manage everything from sending and receiving funds to changing the settings of their device. Forget about bridges, applications, extensions, and the ever-dreaded executable files!

Based on their return policy, Prokey keeps customer information for only 60 days for the sole purpose of providing after-sales services in case of a faulty device. After 60 days, Prokey removes all customer information to protect customers from attacks. So, if you’re looking for an anonymous device, the Prokey Optimum would be a great choice!

Conclusively, the Prokey Optimum cryptocurrency wallet is simple, easy to use, and secure. It’s ranked as one of the lower-priced devices on the market but makes up for it with high-level security features and supports a wide variety of coins and tokens. Not only does the Prokey Optimum provide an all-in-one platform to manage crypto assets, but it can also be used as a security key and if the device itself breaks or is stolen or missing. Users are able to just recover the accounts through the use of recovery seeds.

The Prokey Optimum can be seen as a great starter hardware wallet for beginners and also a comfortably secure choice for veterans alike.

Today it was announced by Filipino-led blockchain Tetrix Network and Pitaka crypto wallet, the launch of Tetrix Link, an NFC card that enables users to select and store information, such as their personal contact...

THORWallet, a non-custodial wallet that allows users to swap native crypto-assets across chains and earn passive income on them, today announced a new partnership with multi-chain DEX, Rango Exchange. For the first time, THORWallet...

Grizzly.fi, a crypto yield farming platform, announced today it has collected $26 million in its so-called 'Community Fair Launch.' The raise is the best performing in history on BNB Chain without a launchpad. The...