A comparison between the cryptocurrency created by the LKS Foundation and Dash, an open-source altcoin

The LKSCOIN cryptocurrency was born in 2018 and conceived to have a significant impact on the digital world. In fact, it allows, to track and remunerate with payments and donations users who create content when they share it within social networks and, more generally, on the web.

The implementation and use of LKSCOIN can provide advantages for both users and platforms. It brings benefits to the users because it allows them to track and receive compensation for the content they produce, thus helping authors, creators, bloggers, and the most active users around the world through the monetization of the digital content they share online. But LKSCOIN is also advantageous for social networks and digital platforms because it builds an integrated system where online payments can be easily managed, significantly lowering running time and costs.

But what are the technical characteristics that distinguish the LKSCOIN cryptocurrency? How does it differ, or rather, which was its evolution with respect to Dash, the cryptocurrency from which it originated?

The Dash cryptocurrency was released in 2014 and it was the first fully decentralized digital monetary system. It is a type of open source peer-to-peer cryptocurrency similar to Bitcoin but with some more advanced features: first of all, the possibility of making instant payments online (InstantSend).

Another major difference between Dash and Bitcoin is privacy. Although these currencies both operate through the blockchain and allow financial transactions without intermediaries, the big difference here is that the coding of the Dash blockchain makes the transactions untraceable and thus guarantees total anonymity (PrivateSend).

But the greatest innovation of Dash is its architecture, which consists of two levels:

Transaction speed, low usage costs, and distributed governance among the nodes that make up the network. These are the characteristics that inspired the structure of LKSCOIN. But to allow creators from all over the world to regain power over their content it was necessary to create a cryptocurrency conceived to be used within social networks and online platforms. It was necessary to go even beyond the opportunities offered by the Dash.

LKSCOIN was born to provide digital content creators with a tool to attest to the intellectual property of their work and, at the same time, to be able to monetize it freely.

With the aim of creating a technically optimal payment token designed for social networks and User Generated Content sharing platforms and conceived as a central element of any type of decentralized dApp, the LKSCOIN development team has chosen to use not one but as many as two blockchains: Dash and Ethereum.

In particular, the choice to rely on the algorithm of Dash is due to its ability to manage a large number of transactions and, thanks to the double architecture with the Masternodes, users can actively participate in the protection of the network in exchange for a set fee.

LKSCOIN, in addition to the Dash blockchain (considering its characteristics of strong solidity and reliability), has integrated the Ethereum blockchain to spread throughout the vast user base of the latter and to enable the integration of various internal products and services that include smart contracts, DAPPs (decentralized applications) and DEXs (decentralized exchanges). Furthermore, thanks to the blockchain of the latter, it is possible to issue LKSCOIN as an ERC-20 token and, above all, to create a Non Fungible Token (NFT) for the protection of digital copyright.

One of the main objectives of the ongoing fundraising of the Foundation is the creation of an NFT capable of linking the ownership of the content and the identity of its author according to the fundamental principles of the blockchain. By linking these two elements in a unique and irreversible transaction, it will always be possible to trace the authorship of the content. Users will be able to protect the originality of their ideas and the works they publish on the internet and at the same time, a more ethical and responsible behavior in the dissemination of information will be encouraged, countering the online spread of fake news and misleading content.

The following chart compares the two cryptocurrencies Dash and LKSCOIN: 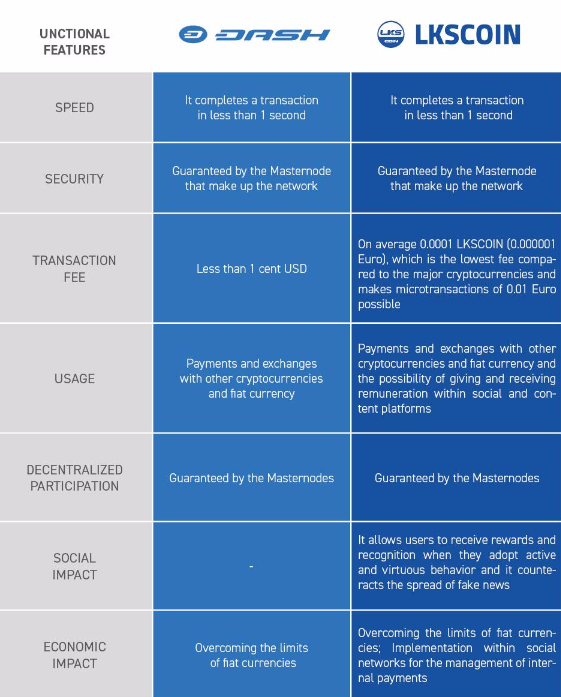 For all those interested in learning more and participating in the IEO of LKSCOIN, we invite you to visit the official web site of the Foundation and the official channel within Cam.TV.