The Weekly: Issue No. 4 - 5/4/2020 by Hxro Labs - With the Bitcoin halving and US/Canadian unemployment figures just around the corner, the markets are expected to be volatile in the coming weeks. Get the scoop below:

Central bank issued (and controlled) digital currencies are no longer just a pipe dream, as China is set to begin major trials of its digital currency called the e-RMB. Beginning in May, throughout four cities including Shenzhen, some government employees and public servants will be able to receive their salary in the state’s digital currency. China is set to strengthen its position as the global leader in cashless digital payments.

The major market data release to watch will be the U.S. unemployment report, as numbers have ballooned in recent months due to the ongoing pandemic. As the U.S. and other countries begin to ease restrictions, the question is how soon people will be able to get back to work and get employment figures back to pre-Coronavirus levels. For context, the 2008 crash saw U.S. unemployment hit 9.6% and it took six years to return to average levels near 5%. There is always light at the end of the tunnel, but how long is the tunnel?

Bulls made another strong push last week, holding the yearly open at $7,160 with a brief peak above the psychological resistance of $9,000. If the rally is to continue, price will need to close the week above the previous breakout level at $7,700 with an upside target of $9,500. This $9500 level served as a strong support last summer and equally strong resistance in spring of 2018.

With the halving less than ten days away, the Bitcoin hash rate continues to make a significant recovery, up nearly 40% from the March lows. Hash rate made a new all-time high May 3 above 150 Exahash and it will be important to keep an eye on the next difficulty re-adjustment. It is widely expected that hash rate will drop off immediately following the halving, as the older and unprofitable mining rigs are forced to power down with the drastic block reward reduction. Depending on the decrease in hash rate, there could be a small window of time where block production may slow as the difficulty re-adjustment will not take place for a few days after the halving.

Another high-volume week for earnings reports in U.S. equities will provide for continued market volatility. Equities hit a major resistance level at 2940 and retreated aggressively last week. Bitcoin is still tracking moves in the SPX consistently, and this elevated correlation is worth following as the two markets have mirrored one another for the past seven weeks. 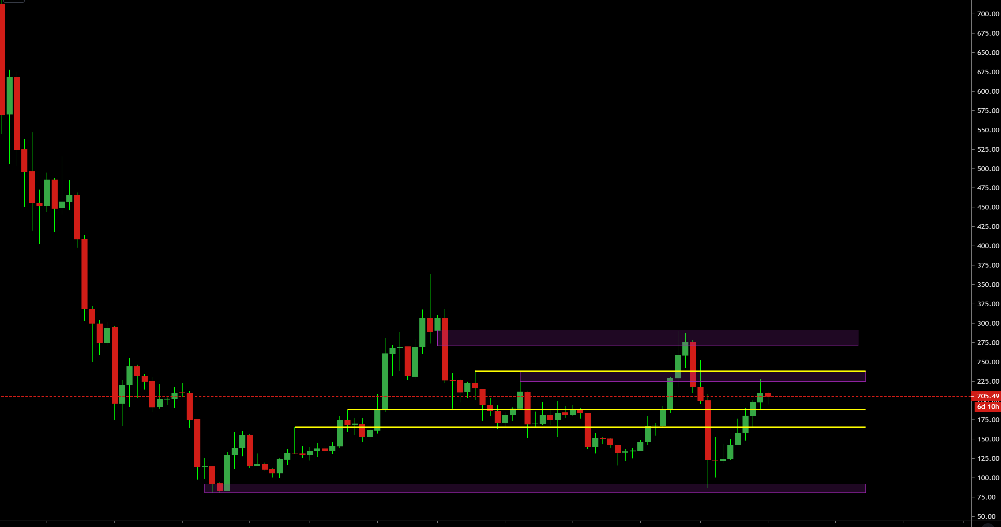 Ethereum bulls continued their strong upward march as price briefly tapped the $224 resistance level previously mapped out, with the market now up over 150% from the March lows. If bulls are to continue their recent domination, price will need to close above $164, which served as a strong level of support last fall, as well as a price spring more recently. Next resistance levels to monitor will continue to be $224 and $270, which has yet to be retested since it marked the top back in February.

A trend we have been closely monitoring is the rapid decrease in open interest on Ethereum products at BitMEX as other competitors roll out additional products. Open interest dropped over 30% in the past week alone, which should serve as a signal that exchanges need to continue to innovate for their customers, or risk losing them completely.

Going into the Bitcoin halving, we expect Ethereum to follow Bitcoin’s trajectory in the short term. The ETH 2.0 upgrade is approaching, with a tentative launch date expected in July. With the introduction of staking rewards in ETH 2.0 and the continued growth of DeFi, there are plenty of fundamental reasons for bulls to be excited about in the coming months. 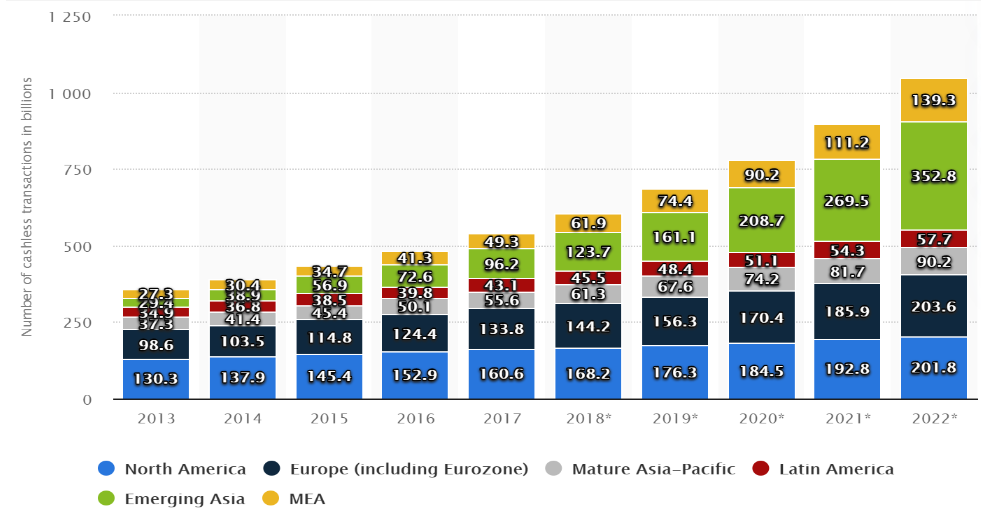 “The war on cash” is a term that is used frequently, but cash remains an integral part of people’s lives, especially when making smaller payments. Cash payments under $10 represented 55% of all transactions according to the Federal Reserve Bank of San Francisco. While cash may still be king, data suggests a strong trend towards a global economy that utilizes cashless payments more and more, fueled by increasingly more efficient and convenient technologies such as mobile pay, tap debit payments, and the modern conveniences of online shopping.

These global trends set the stage for a gradual transition towards digital currencies, both decentralized, like Bitcoin, and central bank issued digital currencies (CBDC), like China’s e-RMB. China begins major trials of its e-RMB this month and Sweden is also currently experimenting with its own CBDC, e-krona, which currently has no public launch date.The rise in popularity of digital currencies has mirrored these global consumer trends, as the total market cap of cryptocurrencies has gone from $0 in 2008 to over $243 billion today. This growing industry spurred a cycle of innovation that is just getting started, with the explosion of DeFi serving as a perfect example.

In previous issues we’ve looked at how DeFi is helping to drive value for Ethereum, but it remains to be seen what measures DeFi companies are taking to solve crypto’s long-standing deficiency – ease of use. Solutions may come from outside the crypto industry as companies like Samsung and HTC have both deployed blockchain-based apps and support for their devices in recent years, with HTC recently introducing support for DeFi platforms such as Compound and MakerDAO.

The DeFi space is an evolution chamber of ideas and experiments in its infant state, and while there have been plenty of mishaps over the past quarter, they have served as valuable lessons for developers and users. Price oracle vulnerabilities and poor liquidity have been common attack vectors for many projects, but the market is already addressing these issues via the Coinbase Price Oracle and cross-chain liquidity solutions via Ren Protocol and Provable Things, for example.

While there has been tremendous growth in the DeFi space over the past year, recent blunders led to a 16% drop in locked-up ETH from its highs three months ago. Multiple smart contract ‘exploits’ and massive liquidations on Maker during Black Friday proved to shake the confidence of some users. If the DeFi space continues to innovate and quickly adapt to issues as they come, the long-term uptrend in growth should continue.

The much-anticipated Bitcoin halving is less than ten days away and the network hash rate is making all-time highs, breaching the 150 Exahash level on May 3rd. Last week marked the final difficulty adjustment before the halving with a +8.45% increase in difficulty. The block reward halving will mark the end for many miners as their older hardware will become obsolete at current market prices for BTC and electricity. With the high costs involved in upgrading hardware, and a limited amount of chip manufacturers to meet demand, many miners are in a difficult position.

The majority of mining operations are privately held so the available data is limited. However, there are two publicly traded mining companies, Hut8 and Bitfarms, both of which are located in Canada. Public filings give us a glimpse into the hard data, and they are not inspiring. The numbers show a startling trend of falling revenues and overleveraging amid fierce competition. With the upward trend in network difficulty continuing to accelerate, this will eat into miners’ profits, forcing them to expand/upgrade their existing hardware or potentially shut down operations.

We’ve previously touched on funding mechanisms for miners, and recent filings confirm that miners are using their Bitcoin as collateral to secure large USD denominated loans to fund operating expenses and expansion plans. This is extremely risky, as this increases exposure to the price of Bitcoin significantly, and if there is a drop in BTC price post-halving, it could spell disaster for a lot of miners.

HXRO, a crypto trading platform that offers users an uncomplicated way to play the markets, has chosen Solana as its L1 blockchain partner, to help it move to a fully decentralized trading network powered...