Enjin builds a suite of user-first blockchain products that enable anyone to easily create, manage, distribute, and integrate blockchain assets...

The team of Enjin, an all-in-one blockchain game development platform, announced that a key element of its ecosystem — the Enjin Platform is now live on the Ethereum mainnet.

The Platform democratizes the ability to create, mint and manage blockchain assets. Users can now easily deploy both fungible and non-fungible tokens by using the brand new Web Panel.

4 steps for minting a blockchain asset on Enjin include:

Create a New Project – Creating a new Enjin Platform project is easy: just pick a name, upload an image, and write up a short project description. The new project can be anything from a simple collection of digital art or a cluster of tokenized memes, to a complex web-based app or a video game that is a part of a blockchain multiverse. 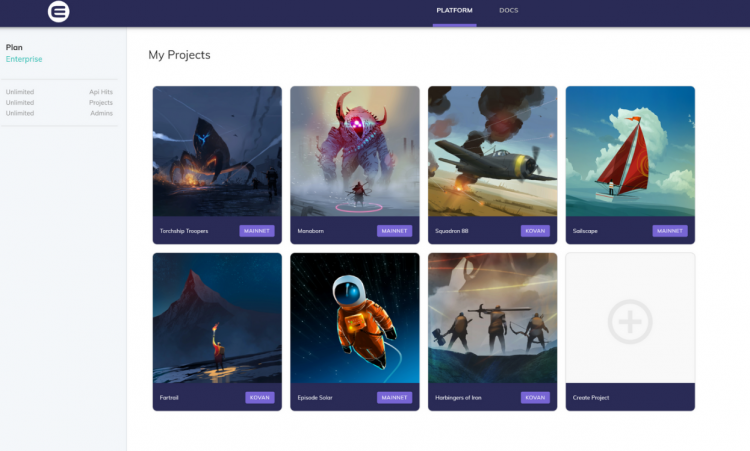 Link Wallet – Linking a wallet is a seamless experience. To start, users will need the Enjin Wallet app installed on their mobile device, as well as some ETH & ENJ to fuel the creation and minting process. Users then need to point their phone towards a QR code, and scan it in order to link their wallet. 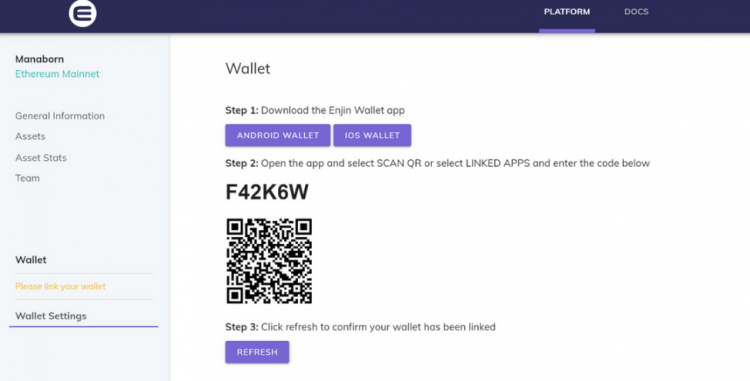 Create Assets – The asset creation process can be thought of as the initial setup. When a user creates an asset, they are not actually deploying it to the blockchain, they are just strictly defining its various values, which can range from simple choices like the asset’s name and image, to complex variables like transfer fee types and starting supply. Blockchain assets created with the Enjin Platform have two types of data: on-chain data (like the asset name, type, or ENJ value per asset) and off-chain data (like the asset image and description). ENJ per asset, asset type, supply model and melt value are on-chain variables that can’t be changed once the item is created.

Mint Assets – The starting supply value that a user picks while creating an asset is actually the initial minting “budget”— it’s there to make sure there’s a supply of ENJ to mint with, and provide a soft cap on the number of assets the user can mint. The actual minting process involves optionally adding more ENJ to the minting supply, and then clicking a button. 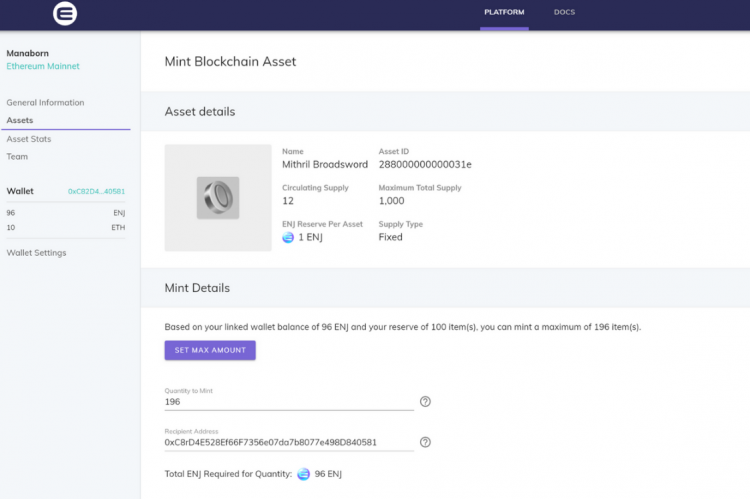 The Enjin Platform Web Panel was built to enable codeless creation and management of blockchain assets; Enjin Platform API and SDKs come into play when it comes to actually integrate those assets with games and apps:

There are currently Unity, Java, NodeJS, and Godot SDKs in various stages of early access and development.

The Enjin Platform (and the ecosystem as a whole) enables users to explore and take advantage of four new gaming industry technological advancements, enabled by next-generation blockchain infrastructure and products:

“The past couple of months have been chaotically beautiful at Enjin. From creative development sprints to what seems like endless cross-departmental meetings, we’ve been extremely quiet on the outside, while brewing a creative, productive storm on the inside. With the launch of the Platform, we’re one step closer to completing our blockchain ecosystem. While our products are forged in gaming, we’ve seen everything from a creative wave of blockchain assets created by the amazing Enjin community members, to technological giants utilizing Enjin-powered blockchain assets as part of their user retention and engagement strategies. So… what’s next? Well… We’re working on something. You’ve likely seen it before. In the near future, it will be public and usable by all. It’s just a way to distribute blockchain assets via QR codes.”
– The Enjin Team

Enjin, an ecosystem for non-fungible tokens (NFTs), has now launched its parachain Efinity on Polkadot. As the first-ever NFT parachain to launch on the Polkadot network, Efinity will support CryptoBlades and its 1.1 million...

Enjin, a decentralized platform for non-fungible tokens (NFTs), today announced over 70 ecosystem partners have committed to building the decentralized Metaverse on Efinity, a decentralized, self-governed, and self-sustaining blockchain for NFTs, featuring full interoperability with...

Enjin, the creators of the ERC-1155 non-fungible token (NFT) standard, have announced they have sold out their $18.9 million private sale for Efinity, a next-generation NFT blockchain made for games, apps, enterprises, and creators,...

Enjin, an NFT ecosystem and the co-creator of the ERC-1155 token standard, today announced it is launching two scaling solutions to remove gas and support fungible and non-fungible tokens (NFTs) from any blockchain: JumpNet,...