Sablier, a dApp built-on Ethereum for continuous payments, is now live. Sablier focuses on companies, employees, and payroll. However, it has many use-cases, other useful applications include: freelancing subscriptions, taxes, consultancy (lawyers, doctors) rent, etc.

The app was launched initially in June 2019, but had several shortcomings including:

Not satisfied with the early release, the Sablier team decided it was best to redesign everything.

The interfaces are hosted at pay.sablier.finance and app.sablier.finance, in order to make a distinction between the web interface for streaming money and the one for receiving the streamed money. 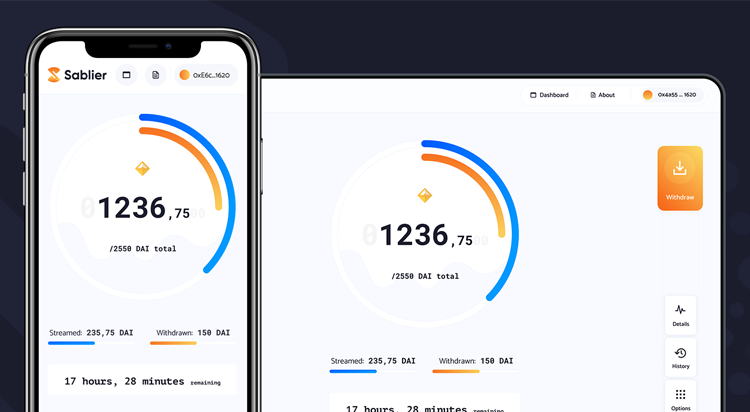 Check out the below demo video for how anyone in the world can start streaming money:

Sablier is being built with the goal to make paydays a thing of the past by earning a salary in real-time. Users are able to verify they are being paid and don’t have to trust an employer. Organizations can also stop wasting billions on accounting, invoicing and timestamping, where money streaming through Sablier can do better.

“Our smart contracts have been audited by Quantstamp and ConsenSys Diligence. Sablier depends on new technology that may contain undiscovered vulnerabilities; we encourage you to verify our contracts by yourself. The protocol is accessible via our branded web interfaces, but no one stops you from rolling your own. If you’re a wallet developer, we’d love to help you build a plugin for Sablier. We couldn’t have built this without the huge support we received from MakerDAO, which awarded us a community grant in August 2019 to fund the development of Sablier v1. Thank you so much.”
– The Sablier Team

Today it was announced by Filipino-led blockchain Tetrix Network and Pitaka crypto wallet, the launch of Tetrix Link, an NFC card that enables users to select and store information, such as their personal contact...

THORWallet, a non-custodial wallet that allows users to swap native crypto-assets across chains and earn passive income on them, today announced a new partnership with multi-chain DEX, Rango Exchange. For the first time, THORWallet...

Grizzly.fi, a crypto yield farming platform, announced today it has collected $26 million in its so-called 'Community Fair Launch.' The raise is the best performing in history on BNB Chain without a launchpad. The...