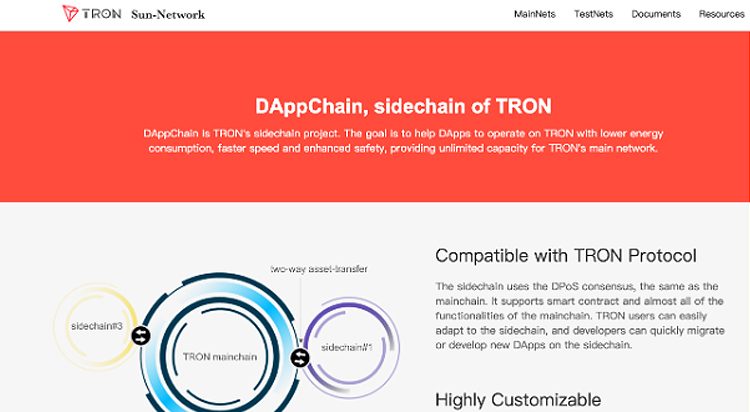 Bitcoin has Lightning Network, Ethereum has Plasma. Now, TRON, the 13th ranked cryptocurrency by market cap, has a scaling solution to call its own. Sun Network version 1.0, the first iteration of its proprietary sidechain, is designed to significantly enlarge TRON’s mainnet capacity, utilizing a series of scaling developments in tandem with cross-chain solutions, a new app titled DAppChain and smart contract optimized application sidechains.

The bold promise of Sun Network is “unlimited scalability,” suggesting that TRON’s are extremely confident in the results their latest venture will bring. Although sidechains are not without their trade-offs, TRON’s CEO and founder Justin Sun seems pleased with what his team has accomplished so far.

The founder has put his name to Sun Network after all, which indicates confidence in its ability to bring tangible benefits to entities utilizing the sidechain solution. Among the developments most worthy of note are the aforementioned DAppChain, a project designed to facilitate and turbocharge sidechain scaling. DAppChain allows decentralized applications to run securely using far lower power consumption and with increased efficiency. Like the mainchain, Sun Network uses a DPoS consensus algorithm and supports most of the same smart contract functionalities. As such, it essentially operates as “TRON lite,” while enabling sidechain users to send transactions to the mainchain as and when required for full finality.

Sun Network’s sidechain will also allow customizable transaction confirmations, transaction rates, and the setting of sidechain incentives, allowing developers to harness a suite of powerful tools. The philosophy espoused by TRON seems to be to put as much power in the hands of developers as possible. A series of Sun Network walkthroughs has been provided by TRON, demonstrating how to build dApps on DAppChain, and how to interact using js-SDK and java-SDK.

Justin Sun and his team will be hoping that Sun Network will sweeten the deal for dApp developers who may have been pondering taking the plunge and building upon the smart contract network. With competition among second-gen blockchains heating up, developers today are presented with an embarrassment of riches. Whereas only a year ago, Ethereum was the only viable network for launching decentralized applications, today a robust ecosystem of smart contract platforms has spawned, each promising high throughput and scalability coupled with low resource costs.

Cheaper Than the Mainchain

Although EOS provides free transactions to end-users, the costs to developers can be high, as they are obliged to pay potentially crippling RAM costs for high volume applications. Sun Network promises resource consumption that is multiples lower than on the mainchain, enabling dApp developers to launch scalable applications whose maintenance costs remain manageable, regardless of demand.

Winning the hearts and minds of dApp developers is one thing of course; winning the affection of the fickle dApp-playing public, however, is quite another. Through lowering the barriers of entry for developers, TRON’s approach is to foster a building boom. With any luck, when the dust has settled, a handful of the applications to have launched on Sun Network will have gained traction.