The SFOX Multi-Factor Market Index has moved from uncertain to mildly bullish as of July 9th, 2019

In the June 2019 edition of the SFOX monthly volatility report, the SFOX research team has collected price, volume, and volatility data from eight major exchanges and liquidity providers to analyze the global performance of 6 leading cryptoassets — BTC, ETH, BCH, LTC, BSV, and ETC.

The following is a report and analysis of their volatility, price correlations, and further development in the last month.

Note: In order to better report and analyze the entirety of the continued crypto rally, the team at SFOX has extended the period this report covers from the beginning of June through July 9th.

Based on calculations and analyses, the SFOX Multi-Factor Market Index, which was set at uncertain at the beginning of June 2019, has been moved to mildly bullish as of July 9th, 2019.

It’s evident that the price of bitcoin has been rallying over the past month, but in terms of the overall market conditions, it’s critical to separate what the data are telling us from what trader psychology (in particular, FOMO) may be telling us. Sustained trends in large-scale institutional development, renewed attention from the retail market, and long-term price indicators give us reason to assess the current climate as mildly bullish.

June 2019 marked the beginning of an upswing in crypto — particularly, an upswing in the price to buy bitcoin — that has only been surpassed in magnitude, to date, by the crypto bull run in November and December of 2017. The similarities and differences between the current 2019 rally and the 2017 rally underscore how far the crypto sector has developed since then — and how much further it has yet to go.

Facebook announced the details of its cryptocurrency Project Libra, which signaled the interest of major companies in crypto and coincided with the beginning of the current rally (June 18th).

On Tuesday, June 18th, Facebook announced details of a new cryptocurrency platform they are developing, backed by a consortium of tech companies such as Uber and Booking.com which stand to benefit significantly from a decentralized, lower-fee payment solution. In the eight days following that announcement, the price to buy bitcoin increased over 39%, from $9121.67 to a peak of $12703.75. While it’s still far too early to fully evaluate the impact of even the mere announcement of Project Libra, it appears to have potentially impacted the crypto sector in two seemingly opposed, positive ways: on the one hand, the announcement reinforced that major companies are willing to invest in crypto-centric enterprises; on the other hand, the announcement may have reinvigorated interest in bitcoin specifically as a cryptographic, decentralized currency that is outside the control of any singular entity, such as the giant Facebook.

Bitcoin’s 30-day historical volatility cleared 80% for the first time since last December — but it’s far from being “more volatile than ever” (June 30th).

In recent history, BTC has been less volatile than other cryptoassets; that trend has reversed during the current rally, with its 30-day historical volatility leading the pack in terms of crypto asset volatility at 81% on June 30th, climbing to a current value of 89.13% as of July 9th. While this is noteworthy and has been hailed by CNN as the most volatile time in Bitcoin’s history, it doesn’t come close to the volatility that bitcoin saw during the winter rally of 2017:

The macrotrend of bitcoin’s volatility peaks decreasing since December 2017 highlights that better trading infrastructure and liquidity may, in fact, be stabilizing bitcoin and other major cryptoassets, relatively speaking, leading to the continued maturation of crypto as an asset class.

The crypto market’s financial infrastructure continued to mature as two derivatives providers were approved to offer physically-settled bitcoin futures contracts. Regulated financial instruments such as these offer traders and institutions more opportunities for entering the crypto space, signaling the further maturation of crypto as an asset class.

Earlier this month, SFOX published a research note detailing how, anecdotally, on holidays that occur during crypto bull runs (e.g., Thanksgiving, Christmas, and New Year’s Eve 2017), bitcoin’s price has experienced a temporary bump, potentially in part due to growing retail market awareness coupled with fear of missing out, or FOMO. The Fourth of July appeared to fit that trend: on the holiday, the price of BTC climbed from $11,389.39 to $11,677.47, only to drop back to $11,114.11 on July 5th.

Look to these events as potentially moving the volatility indices of BTC, ETH, BCH, LTC, BSV, and ETC in the remainder of July and early August:

This coming Tuesday, David Marcus, the head of Facebook’s Calibra wallet, is set to testify before the U.S. Senate Banking Committee on Project Libra; the House Financial Services Committee has a hearing on Libra scheduled for the following day. These hearings constitute just one part of the U.S. government’s current inquiries into “Big Tech”: Facebook will also join Apple, Amazon, and Google is sending representatives to appear before the House Antitrust Subcommittee on July 16th. Given what close attention the crypto market paid to Libra’s announcement, these close inquiries into Libra, along with any subsequent action taken by either the government or Facebook, could potentially impact crypto as well.

Backed by major institutions like Microsoft and Starbucks, Intercontinental Exchange startup Bakkt has been discussed for the better part of the last year as a potential way to broaden institutional access to crypto markets. Even if the testing phase of their bitcoin futures product doesn’t immediately lead to an uptick in an institutional entry, the crypto market may potentially react simply by virtue of paying close attention to Bakkt’s overall development. LedgerX and ErisX have both also recently received approval to offer physically-settled bitcoin futures contracts, though neither has a firm rollout timeline yet.

In accordance with their broader scaling philosophy, the Bitcoin SV community will be increasing Bitcoin SV’s default block size limit to 2 GB in a protocol upgrade scheduled for July 24th. Up to the present, BTC-led crypto rally, BSV exhibited uniquely high volatility, potentially due to the contentious debate about whether BSV affiliate Craig Wright is Satoshi Nakomoto. A major protocol upgrade could potentially contribute renewed volatility to the crypto asset.

One of the factors that SFOX previously cited as potentially contributing to Litecoin’s strong performance in the first half of 2019 is the upcoming “halving event,” which will reduce the amount of LTC rewarded for each new Litecoin block mined from 25 LTC to 12.5 LTC. While the market may have already priced in this upcoming decrease in the rate of new LTC added to the total supply of LTC, it’s theoretically possible that LTC could see further volatility as the event grows even closer.

For greater graphical clarity on the rest of the market, see the following price chart omitting BTC and the S&P 500:

For greater graphical clarity, see this additional chart tracking only the month-over-month changes in the prices of BTC, ETH, gold, and the S&P 500:

By looking at the 30-day historical volatilities of BTC, ETH, BCH, LTC, BSV, and ETC, it can be seen that the volatility of most major cryptoassets formed a relatively tight band that saw a sharp uptick on June 26th — the day BTC challenged the $13,000 price barrier. This increase in volatility may be related to the expiration of BTC futures contracts on June 28th, especially because these expirations included BitMEX’s quarterly contract.

The exception to the general volatility trend was Bitcoin SV, whose outsized volatility decreased throughout the month to more closely align with the rest of the market; this may potentially be a consequence of debate over Craight Wright being overshadowed by broader market news such as Facebook’s Project Libra and BTC’s rally.

BTC’s 30-day price correlations with ETH and BCH were both relatively positive as of July 9th. In contrast, BTC has an unusually negative correlation with Litecoin. This reinforces the narrative that, throughout 2019, Litecoin may be establishing itself as an asset with fundamentals independent of Bitcoin. 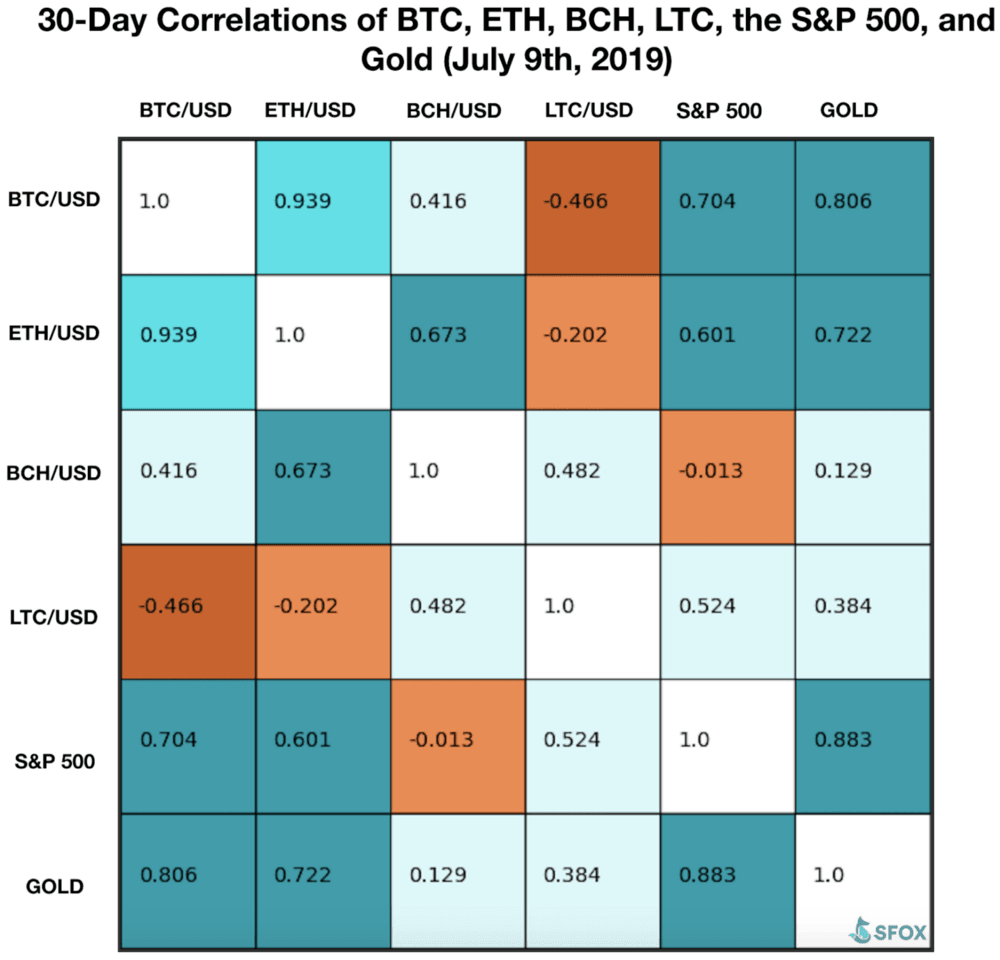 Interestingly, whereas BTC’s correlations with the S&P 500 and gold were nearly -1 in May, these correlations were both positive in the past month. This may be the result of all three of these assets currently being in a risk-on environment, with Federal Reserve Chairman Jerome Powell hinting at an interest rate cut and the New York Federal Reserve’s recession indicator reportedly being at the highest level since 2008.

For a more complete look at BTC’s correlations with other assets throughout the past five weeks, see the following graph:

SFOX is a premier broker-dealer for sophisticated cryptocurrency investors. Their platform is specifically optimized to meet the rigorous standards of high-volume and institutional investors and give them a competitive edge when trading. The SFOX Research team provides in-depth analysis of the crypto market, including a monthly volatility report which analyzes market data and sentiment.