Klaytn is committed to triggering the mass adoption of blockchain services as to substantiate the value and utility of blockchain technology. In doing so, Klaytn focuses on enhancing development environment and offering high performance and flexible scalability solutions for BApps (Blockchain Applications) with large traffic.

The Klaytn mainnet features fast response time on par with that of legacy web services, based on the actual feedback from the partners via the public testnet trial. Further, the stability of the mainnet platform has been verified based on the security testing of high-intensity with 4 different security companies, while the user experience has been improved based on blind testing for developers and users.

For Ground X, the business focus lies beyond simply building the mainnet platform. Its efforts towards building the ecosystem surrounding the Klaytn platform in order to provide blockchain experience for millions of users have successfully resulted in partnerships with 34 service providers with market-proven success in massive user-based service operation.

Together with the Klaytn mainnet launch, the 9 blockchain projects including ‘HintChain,’ the blockchain-based food data marketplace, ‘Antube,’ a short-video entertainment service, and ‘Pibble,’ image-based SNS service, are to be successively released on Klaytn until the beginning of July.

Further, in order to encourage service providers to maintain a stable network, Klaytn features transparent evaluation and incentive mechanisms called Proof of Contribution (PoC) and Klaytn Improvement Reserve (KIR). PoC assesses the contribution level of all economic entities within the Klaytn ecosystem and provides KLAY token that corresponds to each entity’s level of contribution. KIR, on the other hand, is allocated for anybody committed to maintaining sustainable ecosystem growth through various activities such as platform research or community events.

Klaytn also features ‘KLAY BApp Partners’ whose blockchain-powered services use KLAY token for reward and payment. The users are able to earn KLAY and freely use them across diverse services.

First, a number of blockchain-powered game services developed by 3 major game studios that have gained wide popularity on other blockchain platform are joining Klaytn. ‘Klaytn Knights,’ an updated version of ‘EOS Knights,’ developed by the no. 1 global blockchain game development studio, Biscuit, which is now open for pre-registration. ‘Marvel Clans,’ the new game service developed by MixMarvel, which was previously developed Hyper Snake, the no. 1 DApp on TRON, and ‘Axie Infinity,’ a digital pet collectible game as developed by Vietnam-based Sky Mavis Pte. Ltd. are also servicing their games later this year.

Some popular character-based games are also recreated via Klaytn. mgame, the Korea-based online game developer with over 20 million users, is transforming ‘Hon’ and ‘Princess Maker’ into blockchain-powered games by utilizing their IP’s. In addition, ‘Crypto Sword & Magic’ of Nod Games, ‘Infinity Star’ of Node Brick, two of which are selected by the Korea-based blockchain accelerating program ‘Hashed Labs,’ along with ‘Crypto Fishing’ of MEMORY Inc., are utilizing KLAY for their game services. 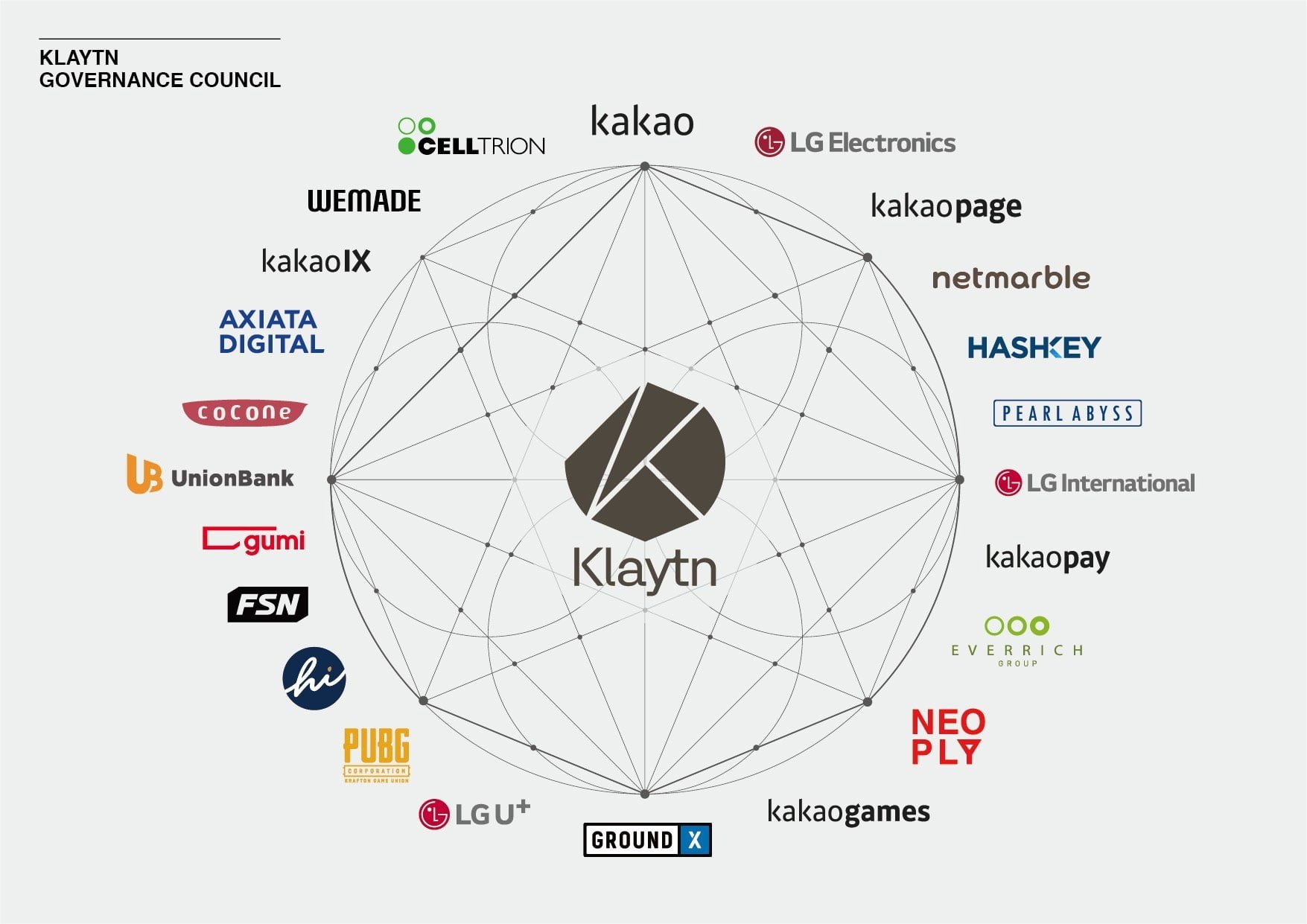 The Council consists of 19 global top-tier companies that have successfully produced massive user-based popular services in various industry domains including IT, telecommunications, content, games, and finance. They are also key business units of some of Asia’s largest companies. Considering the region’s booming market with its wider audience eager to embrace new technologies and a great number of emerging firms utilizing blockchain technology for new business models, the assembled alliance is expected to usher in a new era of blockchain through Klaytn.

As key decision makers for key business and technical agenda, the Council members are responsible for operating the consensus node network. Further, they plan to develop Klaytn-based services or implement blockchain to existing services to drive the mass adoption of blockchain technology.

The participating Council members include ‘LG Electronics,’ ‘LG International’ and ‘Celltrion,’ one of the largest biopharmaceutical companies in Asia with $2.5 billion market value. Other notable members are ‘Netmarble,’ the no. 1 game developer and publisher in Korea; ‘Wemade,’ the popular game developer company with its diverse portfolio of IP’s, most notably the ‘Legend of Mir’ with over 500 million users; ‘Pearl Abyss,’ the developer of MMORPG ‘Black Desert,’ the globally famous game around 150 countries; ‘PUBG,’ the no. 1 paid game company in the world, boasting its famous ‘PlayerUnknown’s Battlegrounds’; ‘Neoply,’ the investment arm of ‘Neowiz,’ one of the largest gaming companies in Korea; ‘FSN,’ the IT development company that incubated Six Network, providing financial services and digital asset wallet in Thailand; ‘Kakao,’ the no. 1 mobile platform in Korea, together with its subsidiaries including ‘Kakao Pay,’ ‘Kakao Page,’ ‘Kakao Games,’ and ‘Kakao IX.’

Further, ‘Union Bank of the Philippines (UnionBank)’, one of the largest banks in the Philippines, along with ‘Axiata Digital and Axiata Digital Service Indonesia,’ the digital services arm of the largest telecommunications conglomerate in Southeast Asia, ‘Axiata Group,’ ‘HashKey,’ the strategic partner of China’s ‘Wanxiang Blockchain Labs’ and the Hong Kong-based leading fintech group, are also joining Klaytn. Further, ‘Everrich,’ the real estate developer heavily focused in Southeast Asia; ‘Hi Inc.,’ the Hong Kong-based unicorn company engaged in global travel and lifestyle business providing services to hotels; ‘Cocone,’ the leading social network digital content company from Japan; and ‘gumi, Inc.,’ a leading global mobile game publisher and developer headquartered in Japan are also part of Klaytn Governance Council. As the Klaytn platform and its ecosystem continue to expand at an advanced speed, Klaytn plans to invite competent service providers to become the potential members of the Council.

“Klaytn will trigger the mass adoption of blockchain and expand the ecosystem by partnering with more service partners.” He further commented, “Klaytn is operated by an alliance of some of Asia’s largest enterprises of great reputation altogether exceeding a market value of over $65 billion and a user base of hundreds of millions, with a mission to enhance the platform’s transparency and trust.Together with our Governance Council, we look forward to operating a stable and reliable blockchain platform.”
– Jason Han, the CEO of Ground X, head of development and operation of Klaytn