As we move forward through 2019, Bitcoin continues to recover, having almost banked a 300% rise in value from the 2018 lows. Even though the move is viewed as mostly-speculative in nature, it is a fact that buyers managed to push the price of Bitcoin back to levels not seen since May 2018.

Two days ago, people who trade the price of BTC saw it rising above $9,000, an area of resistance which held at the end of May. As the price action made a new 2019 high, the bullish parabolic structure continues to extend higher.

According to the Coinbase chart below, Bitcoin managed to break above $8,500, a previous swing high from July 2018 and now the most important resistance area to watch is located close to $10.000. As a former May 2018 swing high + a key psychological area, that zone could pose some significant issues to people who trade the price of BTC on the buy side. 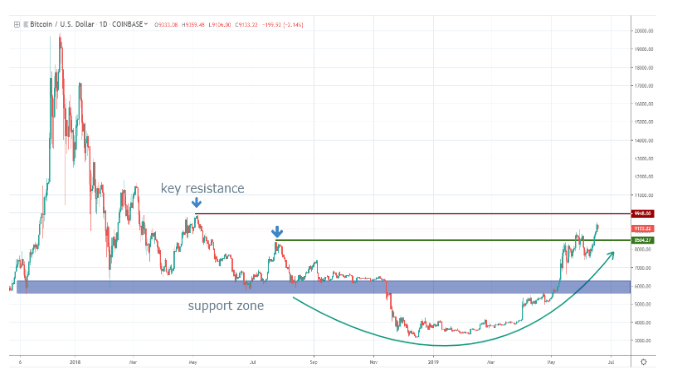 At the present time, the market condition is overbought, following an impressive string of consecutive weekly gains. For the first time since the end of 2017, we had five consecutive weeks when Bitcoin ended higher as compared to the opening price.

Since the beginning of February, only 4 out of the last 20 weekly candles managed to close on the negative three of them showing limited Bitcoin weakness. Fueled by a record volume of CME Bitcoin futures, institutional interest in the largest cryptocurrency is at its highest level.

After losing more than 80% of its value during 2018, Bitcoin was seen in oversold territory at the beginning of 2019 and at the present time, we could be near a deeper pullback. It will be important to see how the price of Bitcoin will react around the $10,000 area. A strong breakout above and follow-through buying could signal further gains on the upside. Given the performance it had in 2019, the most likely scenario seems to point for at least a period of correction, if not a deeper move lower.

However, given that the 2019 bull run had not been supported by any positive fundamentals, it could be another pump-and-dump scheme. If Bitcoin will start to weaken aggressively, we believe it could revisit the key $6,000 support area in the following months. That will be an optimal place for new long-term buyers to find value in Bitcoin, as the current bullish trend looks exposed to weaknesses in the not-too-distant future.