In the March 2019 edition of the SFOX monthly volatility report, the SFOX research team has collected price, volume, and volatility data from eight major exchanges and liquidity providers to analyze the global performance of 6 leading cryptoassets — BTC, ETH, BCH, LTC, BSV, and ETC.

The following is a report and analysis of their volatility, price correlations, and further development in the last month. (For more information on data sources and methodology, please consult the appendix at the end of the report.)

Readers should note that, in the spirit of analyzing consistent time-frames and viewing data in the context of long-term trends, this report neither includes nor analyzes the sharp increase in crypto volatility that was witnessed at the beginning of April. That volatility will be presented and analyzed in the April 2019 Volatility Report this coming month.

“Even ahead of the bullish surge that the crypto market has witnessed in the first days of April, March showed mildly bullish sentiment towards the sector — sentiment which has been gradually increasing month-over-month since we launched the index late last year. While some outlets such as The Wall Street Journal expressed bearish sentiment about the state of the market, several major coins showed significant growth in transaction volume, and companies such as Visa and Facebook expressed sustained interest in crypto and blockchain technologies. The data suggest that growth is still happening where it counts, as institutions continue to be interested in crypto and the sector’s infrastructure continues to mature.”

In March of 2019, individual altcoins saw a mixture of apparently motivated and unmotivated moves in volatility, set against the backdrop of an overall industry becoming less volatile and more mature.

LTC’s price increase and volatility seemed to level off after months of growth (March 10th-31st).

“Last month, SFOX highlighted five factors that may have been contributing to LTC’s price nearly doubling since the beginning of 2019: increased adoption, lower fees, faster transactions, an exploration of private transactions, and the upcoming halving event. From March 10th through the end of the month, however, LTC’s volatility decreased substantially as its price held between $54.93 USD and $60.46 USD. This may mean that the market is approaching the point at which it’s priced in the Litecoin fundamentals we enumerated in our article.”

BCH jumped in price and volatility in the middle of the month with no apparent cause (March 15–16th).

“In the middle of the month, BCH’s price jumped 18% in two days. While this spike did roughly correspond with an under-the-radar announcement of features coming in the chain’s hard fork later this year, there didn’t seem to be an obvious explanation for the sudden price hike. During this time, BCH’s trading volume was also led by LBank — an exchange that was recently highlighted in a report of exchanges that may potentially be faking a large portion of their alleged trade volume. It’s possible, therefore, that this March BCH rally may have been one of those spooky “rallies” that wasn’t grounded by anything fundamental.”

“Even as crypto volatility collectively decreased, ETC’s BTC-relative 30-day historical volatility (defined below as a measure of a crypto-asset’s volatility relative to the broader crypto market) gradually increased throughout the month, starting at 146% and ending at 205%. This may be a function of increasing uncertainty about the future of this particular blockchain: on the one hand, ETCLabs’ renewed focus on Dapp development (especially Dapps focused on the Internet of Things) has some believing that ETC may be a currently undervalued platform for powering the next evolution of internet technologies; on the other hand, the still-recent 51% attack on Ethereum Classic, coupled with news about figures such as Anthony Lusardi stepping down from prominent ETC roles, has some worried about the long-term prospects for the community.”

Major companies continue to invest in the blockchain and crypto spaces in times of low volatility.

“The major trend in crypto volatility was downward in March, with BTC falling from 32.68% 30-day historical volatility at the start of the month to 17.94% volatility at the end of the month. At the same time that crypto volatility was decreasing, reports told of major companies like Visa and Facebook investing in crypto technologies. This reinforces the narrative that the industry as a whole is continuing to mature, attracting the attention of more institutions as infrastructure improves.”

Look to these events as potentially moving the volatility indices of BTC, ETH, BCH, LTC, BSV, and ETC in April:

In the first few days of April, the price of BTC has shot from $4089.54 USD to a peak of $5,089.99 USD on the 2nd — a jump of almost 25% in two days, without an immediately apparent fundamentals-based explanation. If the late-2017 rally is any indication, the sharp movement in BTC’s price without a clear cause could potentially lead to greater market uncertainty, which, in theory, could drive volatility upwards.

April features at least four high-profile conferences centered on institutional or professional interest in crypto and blockchain technologies. Because these conferences are opportunities to educate and generate new interest in the sector, they could potentially drive volatility — especially when targeted towards groups or individuals that control sizable pools of capital.

For greater graphical clarity, see this additional chart omitting BTC and the S&P 500 from the data set: 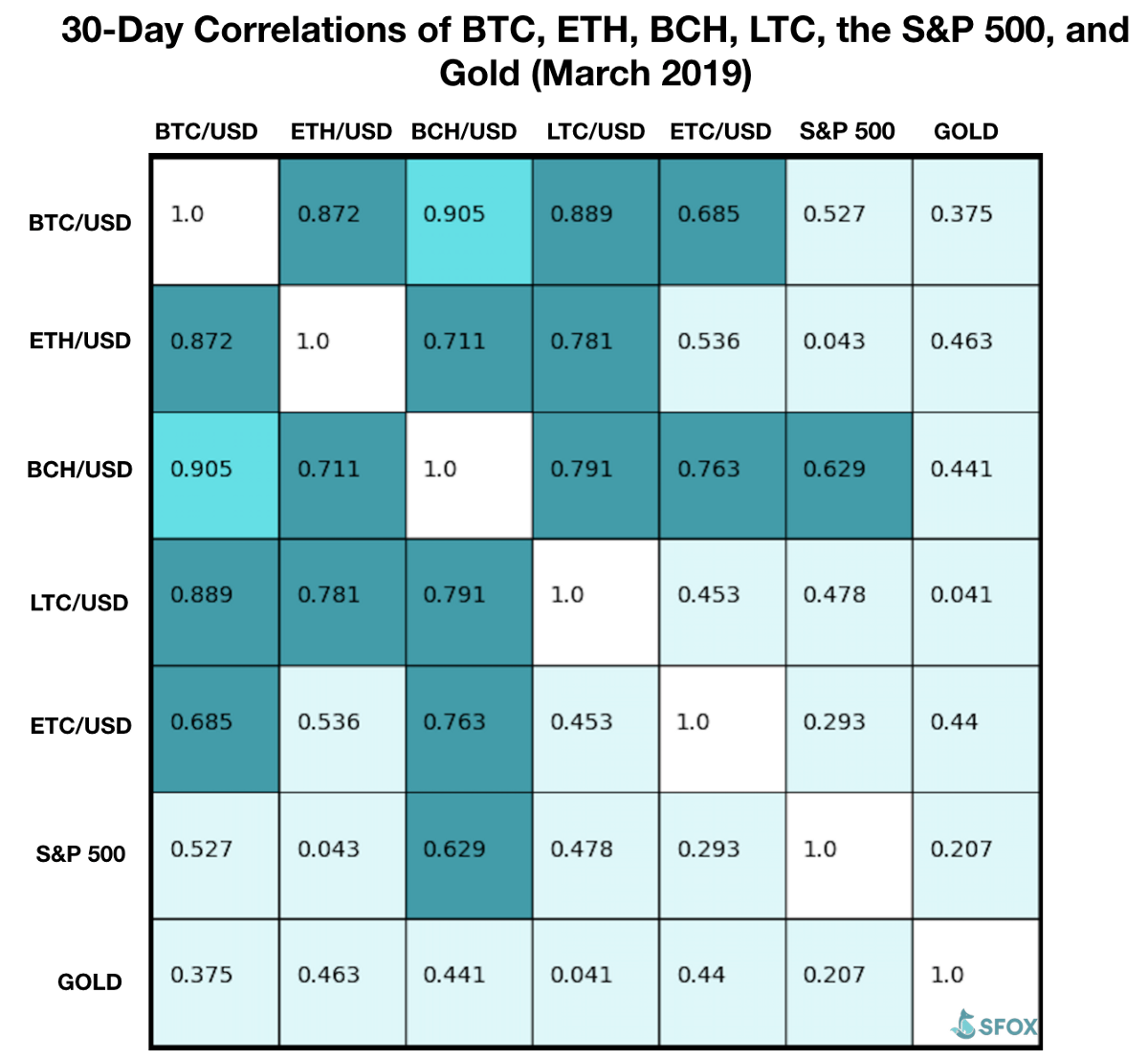 Notably, the correlation level between BTC and ETC steadily decreased from the beginning of March through March 20th, at which point the two were at a fairly low positive correlation of 0.21. This reinforces our earlier analysis that the uncertainty specifically surrounding ETC may be driving its volatility.