NEO, the global Chinese originated public blockchain project with a steadily growing ecosystem today announced that NEO Global Development (NGD) will be partnering with Arqit on quantum resistance research with a shared vision of facilitating blockchain industry development. Arqit is a non-profit community driven blockchain project based in Singapore

As quantum resistance is a core feature and significant aspect of the NEO network, NEO Global Development (NGD) has been pushing forward with relevant research on quantum-proof technology represented by NeoQS (Quantum Safe), a lattice-based cryptographic mechanism.

[perfectpullquote align=”full” bordertop=”false” cite=”David Bestwick, chief executive of Arqi” link=”https://www.arqit.io” color=”” class=”” size=””]“As one of the biggest blockchain projects and ecosystems in the world NEO has an important thought leadership role and we are pleased to be able to share thinking and development with them on the future of quantum safe blockchain business.”[/perfectpullquote]

Arqit is one of the leading projects in quantum resistant technology. It is now developing a quantum resistant blockchain ecosystem for enterprise applications, making modifications on the open source Corda code base and incorporating the unique Proof of Performance Protocol for the first time. Also playing a part is quantum encryption, developed in partnership with a consortium of European companies and universities, and an associated research foundation. 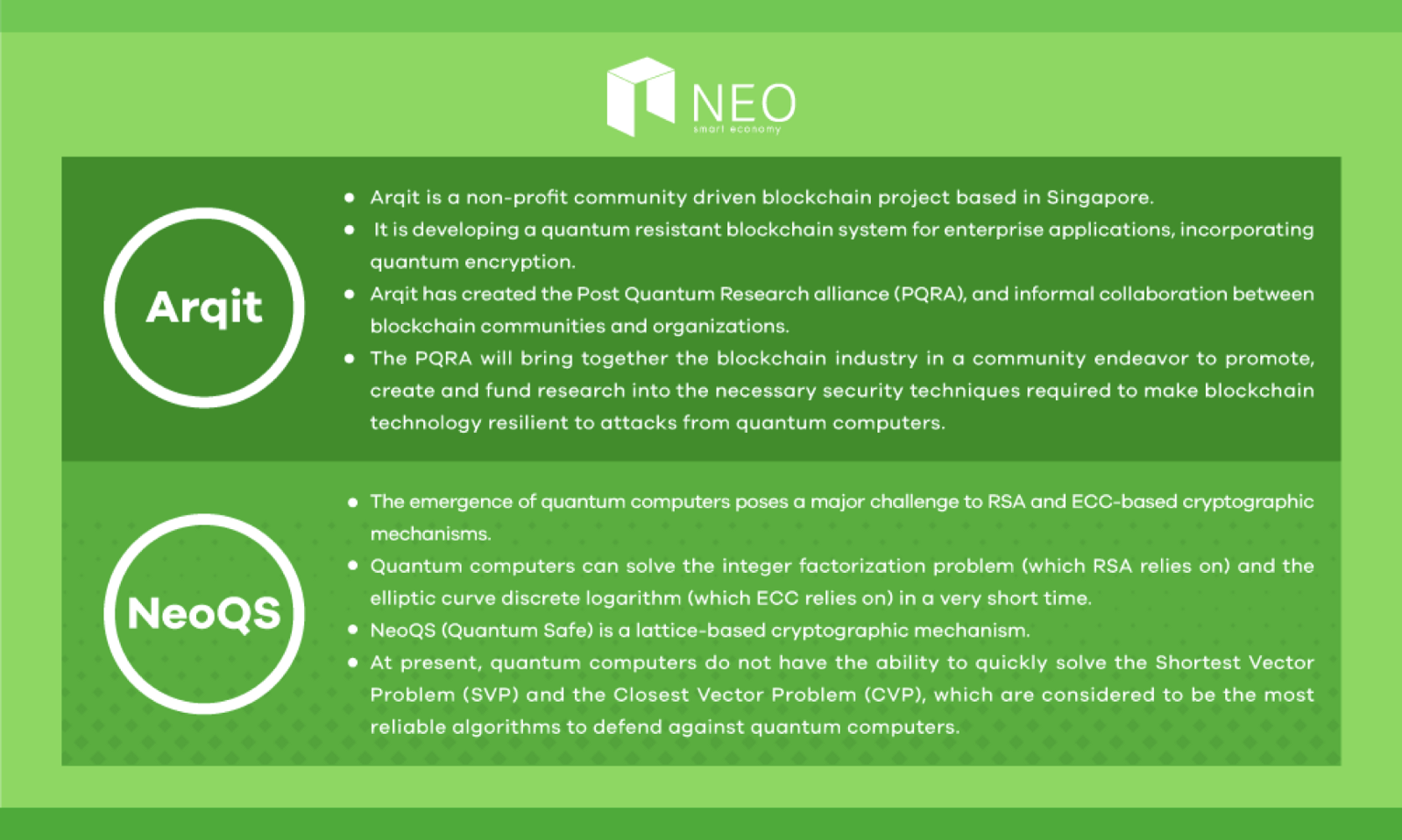 [perfectpullquote align=”full” bordertop=”false” cite=”Peter Lin, director of R&D of NEO Global Development” link=”” color=”” class=”” size=””]“As a pioneer of blockchain technology and one of the biggest blockchain platforms around the globe, it is important to NEO that we remain at the forefront of technology in areas like post quantum cryptography. We are therefore pleased to partner with Arqit and look forward to a collaboration to help to make all blockchain communities safe in a post quantum environment.”[/perfectpullquote]

By establishing the research partnership, PQRA is being strengthened by the involvement of one more major contributor, who in turn will accelerate the pace of R&D on NeoQS and facilitate industry-wide quantum-resistant research. Both NEO and Arqit will extend their collaboration into areas of their interest and promote the development of quantum safe technology in blockchain industry.

InfStones, a blockchain infrastructure service provider, has announced it has partnered with Neo to launch Neo N3 public API services on the InfStones platform. All users can create their Neo API on the InfStones...

Neo, a blockchain platform and dApp ecosystem, today revealed the new brand identity for Neo’s latest version, N3. Neo 3.0 was first announced by Erik Zhang in July of 2018. It promised features such...

In a bid to lay the groundwork for a more collaborative and transparent decentralized ecosystem, three leading global blockchain projects, Ontology, Neo, and Switcheo, have announced the launch of Poly Network, a heterogeneous interoperability...

Everstake, a Kyiv-based staking service platform, announced today it has joined the Neo3 TestNet Preview1 as a consensus node operator. This marks the beginning of decentralization for Neo3. As of June 2019, the Neo...