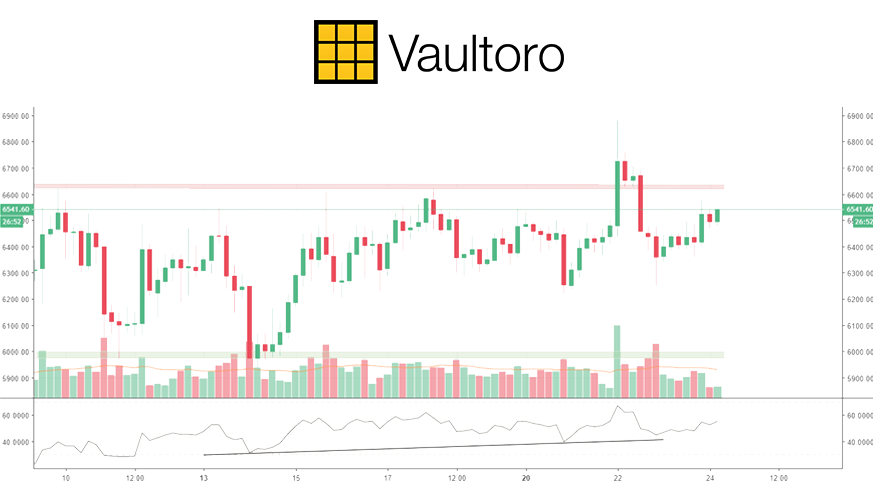 This steady movement was punctuated only with a brief pump on Wednesday, which saw the price climb 3.6 percent to $6,899 (on Bitfinex). This sharp movement was thought by many to be a coordinated pump, as it coincided exactly with the moment when Bitmex—the most popular platform for shorting—went down for scheduled maintenance.

Other than this brief episode, bitcoin has languished in the range just above the key level of $6000. And even despite the rejection of nine bitcoin ETF proposals this week, bulls have still managed to defend key support levels.

Savvy investors, however, are unlikely to be swayed by Wednesday’s pump, which as it was largely thought to be artificial, has not created that much bullish sentiment. Short orders also remain at the highest levels seen for months, making the prevailing market sentiment bearish.

If the market moves downward, then support can be found at $6,000, a level which if broken is likely to result in a retest of the historic level of $5,800.

To the upside, if bitcoin manages to break decisively through the top of the range at $6,650, the $7000 could come into play. This bullish scenario is supported by the RSI, which on the four-hour timeframe has printed a series of higher lows.

Gold has taken a step up over the past week and is currently trading at $1,189.

After surging higher from the beginning to August to the middle of the month, the U.S. dollar has lost traction, giving more strength to the yellow metal.

The decline in the dollar was fueled by weak economic data—U.S. yields have declined from a high of 3% in early August to 2.8%, and on Tuesday the greenback faced downward pressure after Trump criticized the Federal Reserve for raising interest rates, causing the price of gold to break slightly above the $1200 level, before pulling back, and edging further down on Thursday as the dollar strengthened on signals from the Federal Reserve that they are likely to raise interest rates next month.

This break above the $1200 level is a good sign for the market and could suggest a short-term reversal is in play, attracting new buyers to the market. Should this trend be maintained, then the price of gold could head to the $1220 level.

However, the recent selling of gold has been relentless, and if this brief uptick turns out just to be noise, then support could initially be found around the $1,180 level.

Weekly price update on bitcoin and gold from Vaultoro, the bitcoin gold exchange.