GINKAN Inc., the managing company of SynchroLife, the new social restaurant review service with AI and a token economy, has announced a business alliance and seed round with Tokyo Stock Exchange-listed Ceres Inc., one of Japan’s leading blockchain investment companies.

For this seed round, Ceres Inc. was joined by Fujio Komura (Former CEO of Cybird Holdings) who also participated in GINKAN’s angel round in 2017.

This 720,000 USD (80 million Japanese yen) seed round was an allocation of new shares. Including the angel round, GINKAN has raised one million USD to date.

Through this new partnership, GINKAN and Ceres hope to find synergy between Ceres’ mobile point media with over 3.5 million users and GINKAN’s blockchain technology-based services and development.

SynchroLife is a social restaurant discovery service where users post reviews of their experiences dining out. SynchroLife’s restaurant recommendation system uses artificial intelligence to analyze and learn each user’s dining preferences based on their reviews and activity within the app. The service then personalizes search results and recommendations to guide users to the best restaurants from their database of over 170,000 reviews.

SynchroLife’s Hong Kong-based management company SynchroLife Limited held an Initial Coin Offering (ICO) for their original cryptographic token the SynchroCoin (SYC) in September 2017. Since the ICO, SynchroLife has been developing a token reward system that allows users who post restaurant reviews in SynchroLife to earn SynchroCoin as a monetary incentive and reward for their quality content. SynchroLife integrated these new features in the service on August 2, 2018, successfully launching the world’s first restaurant review platform with token rewards and a cryptocurrency wallet.

SynchroLife plans to continue development of new features to allow users to exchange SynchroCoin tokens for dining tickets and coupons, to pay for meals at participating restaurants, and to create a semi-autonomously growing platform. SynchroLife is available for use in English, Japanese, Chinese, and Korean, and has already seen users register in over 82 countries with restaurant reviews posted in over 48 countries. SynchroLife currently has a strong user base in Japan but aims to grow globally as a platform to help users share their great dining experiences from around the world.

SynchroLife and managing company GINKAN were also recently chosen as part of Plug and Play Japan, the Japan branch of one of the world’s largest accelerators born in Silicon Valley.

As part of this business alliance and seed round between GINKAN and Ceres, the allocation of new shares also contains a token equity convertible (TEC) for GINKAN’s subsidiary company SynchroLife Limited’s cryptocurrency token SynchroCoin. This allows the investing parties to exit even if GINKAN is not listed on the stock market or sold, by choosing to convert their equity into tokens.

The growth of ICO fundraising has allowed many startups to raise funds without giving away shares but companies who choose to do an ICO must deal with the tradeoff that traditional funding becomes difficult after ICO. However, using a token equity convertible with funding resolves this issue and allowed GINKAN to hold a traditional seed round and form a business alliance even after their subsidiary company raised funds through ICO.

In this transition period as ICO fundraising becomes more commonplace, GINKAN and Ceres hope their flexible fundraising style will serve as an example to assist other startup companies and contribute to the further growth of a new global token economy. 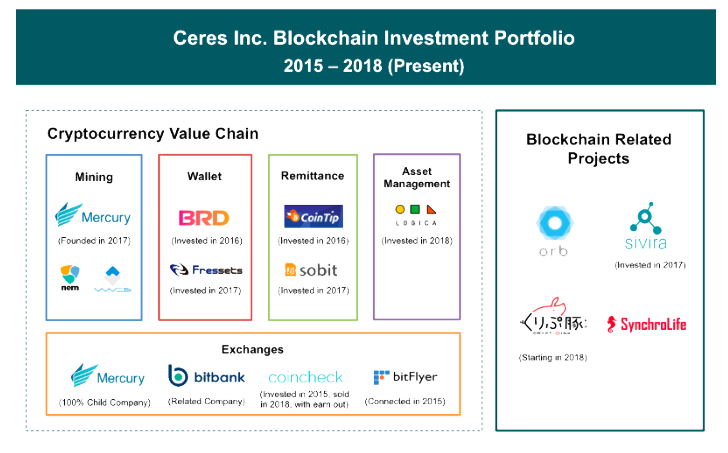