At the time of writing, Bitcoin is trading at $7,348. Last week’s bullish momentum subsided at the $8,250 region, where bulls stood their ground for seven days before overbought conditions turned the tide in favor of the bears, who started to reassert their dominance in the market.

Crypto Twitter’s topic of the week has been the OKex liquidation, whereby a trader managed to accumulate such an enormous long position on BTCUSD quarterly futures, that the market could not afford the $460 million needed to fill it when he got liquidated, creating a $460 million overhang in the weekly settlement.

This has created fear and doubt in the market as the community has speculated on how OKex will resolve the situation, which has no doubt contributed to the correction of the last few days.

As it stands, the price is now hovering over historic support levels in the $7,300 region. This is another critical juncture for bitcoin—an upward move would signal a continuation of the bullish trend of the previous week, and a break to the downside would reinforce the macro bearish trend that has persisted since January.

Should we break to the upside, bitcoin would contend with resistance at the key levels of $8,000, $8,500, and ultimately the key psychological level of $10k.

To the downside, bearish price action would result in a test of the neckline of the head and shoulders pattern that formed over two weeks ago—a crucial support which if broken could send the price spinning down to test new 2018 lows. 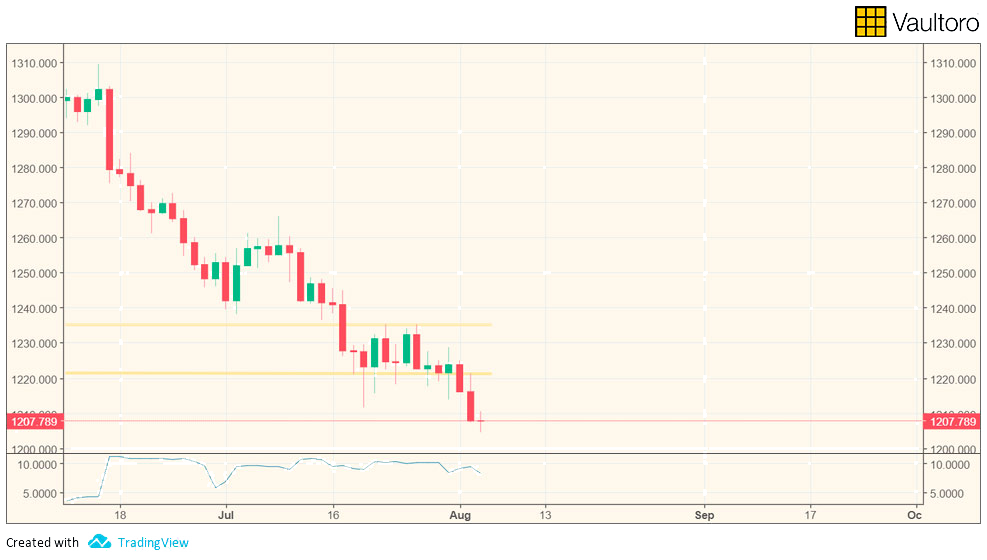 It has been another bearish week for gold, which is currently changing hands at $1,207. After consolidating over a few days last week, the price has taken another tumble, bringing fresh yearly lows into focus.

This was prompted by the decision of the Federal Reserve on Wednesday to maintain interest rates and further suggestions that there could be four more rate-hikes in 2018, commensurate with sustained economic strength and strong labor market conditions.

On the international stage, geopolitical uncertainty has continually failed to tempt gold investors this year, who still haven’t put a bid under the yellow metal despite the increasingly acrimonious US-China trade war, which sees the US considering increasing tariffs on $200 billion of Chinese goods – from 10% to 25%.

Despite the tension, gold continues to trade in a choppy range just above the key 1200/oz support level, and the daily RSI suggests that there is more downside to come. This could find initial support at the March 2017 low of $1,997.

Alternatively, should goldbugs regain their appetite for the yellow metal, then upward momentum would first face resistance at $1220.02, which if broken would pave the way for a retest of former support at $1236 region.