StellarX, a new and the first full-featured trading app built on top of Stellar’s universal marketplace has now opened up for early invites in preparation for launch later this summer.

A user-friendly way to trade all types of assets, StellarX supports fiat, crypto, bonds, whatever — cheaply and quickly while users maintain sole control of their private keys.

Those interested can request an invite as of now, while the platform is gearing up to open to the public.

StellarX lets users “live the inter-chain dream of swapping Philippine Pesos for Litecoin for municipal bonds for lumens, and all of those trades settle in seconds.” Users can trade directly from their own wallet and can deposit and redeem off-chain assets, like BTC or EUR. The StellarX app also helps users manage their secret keys.

By being developed on top of the Stellar order book — no exchange, no miners, no middleman of any kind — takes a cut of the transactions. The StellarX team says, “in a world of a thousand DEXs, we’re one of the few true peer-to-peer, trader-to-trader platforms.”

Trading on StellarX is absolutely free because the Stellar network fees are so low, and the StellarX team plans to refund them out-of-pocket. StellarX pays top market-makers to ensure the closest spreads for everyone. StellarX is also designed so as to give Stellar’s automatic 1% APR inflation back to users, with none of the weekly airdrops ending up back with the StellarX founders. If holding funds on StellarX, users will get pro-rata lumens every Tuesday. 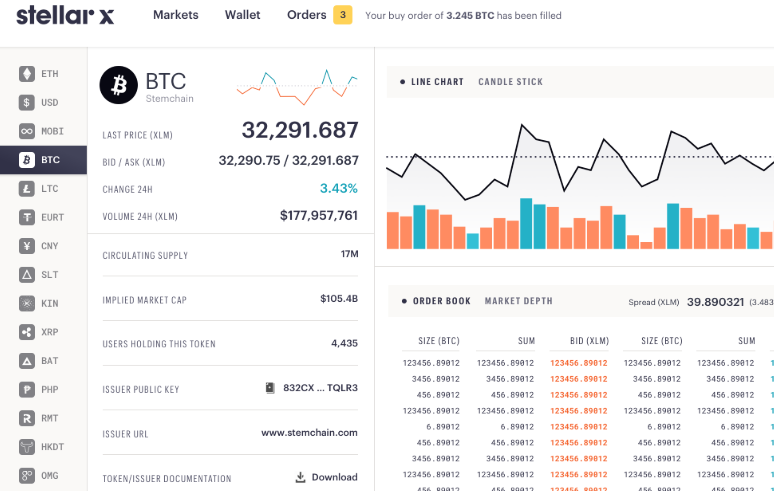 Since StellarX is the first complete client for Stellar, the app supports every last token issued to the network, all 2500+ of them. Approximately 50 new tokens come online each week — crypto, commodities, fiat tethers, securities, etc. StellarX is designed to show every asset, every order book, every trade.

The team on why they decided to build on Stellar:

“Stellar is a fantastic settlement backend that has, until today, had a very basic frontend. The technology is solid. It’s just, historically, been hard to understand and use. Compared to over-valued, under-built technologies, (stuff like, I dunno, 95% of the things listed on coinmarketcap), we believe Stellar is actually underappreciated, even among people familiar with crypto. Here’s what we like about it, Stellar enables arbitrary extensions of the “tether” idea, meaning you can digitize any off-chain asset — pork futures or Zcash or SkyMiles or USD or whatever — and the protocol itself will handle redemption and compliance. Stellar therefore unifies disjoint economies (and blockchains) into a single market.”

“Stellar has support for native ICOs, and because it’s actually a payment technology (and not an attempt to build a “distributed computer”), it’s better than Ethereum for most ICO use cases. Stellar has a built-in order book. It’s not just a ledger system; it’s a transaction system. Markets and settlement are built directly into the platform. Stellar itself matches buyers and sellers. Stellar itself is a DEX. So an app like StellarX can natively expose the entire trading ecosystem, without partitioning.”

“Stellar doesn’t rely on proof-of-work, meaning it’s both energy- and cost-conservative. Transaction fees are, as of today, two ten-thousandths of a penny ($0.000002) — so low we can afford to redeem them for our users. Plus, since Stellar bypasses miners and their ASIC farms, we can use it knowing we’re not paying some dudes to drown our grandchildren.”

“Broad adoption hasn’t happened yet for Stellar. But in putting this thing together we’ve dug deeper into the technology than any team beyond the core developers, and we know it works. We decided we’d rather build now and wait for the world to catch up than have it the other way around. Our founding principle is to always show you the most diverse, most open marketplace on earth. StellarX. Have at it.”

Ukraine hryvnia pilot on Stellar launched by TASCOMBANK and Bitt

Blockchain and fintech company Bitt and TASCOMBANK, one of Ukraine's oldest commercial banks, have launched a pilot project to issue an electronic hryvnia on Stellar. As part of the pilot, the cross-company team will...

SatoshiPay, a blockchain-powered payment solution built on Stellar, announced that it has received a research and development grant from the Stellar Development Foundation to start the production of the Pendulum network; a new second-layer...

The Stellar Development Foundation (SDF), a non-profit organization that supports the development and growth of the Stellar network, has announced a $15 million Enterprise Fund investment in Mexico City-based Airtm, a blockchain-based, bank-connected digital...

COINQVEST, a crypto payment API, invoicing, and management platform, today announced it was selected as the top business in the latest Stellar Seed Fund. The platform was awarded first place by a panel of...