It was a particularly bloody day in the crypto markets, with red arrows, red candles, and red numbers filling the screens of traders and investors.

There was nowhere to hide for the majority of crypto assets the past week, as a wave of liquidation left very few coins unscathed. Sentiment has plunged with disappointment becoming palpable in the social media streams of the crypto trading community, as bitcoin dropped over 25% from the pre-Consensys highs made two weeks ago.

Twitter is one of the most popular outlets for crypto enthusiasts to share thoughts, charts, trading ideas, memes, and talk smack. There is a special flavor to the outright trolling in the crypto community, and it is strong. On dark days like these, there is one Twitter account, in particular, that is a must follow to understand some of the drastic price action.

The account is @BitmexRekt, and the anonymous user taps into the Bitmex API and posts every auto-liquidation that takes place on the exchange, in real-time, with a little gallows humor sprinkled in to spice things up.

Bitmex is consistently one of the top global exchanges in terms of daily bitcoin derivatives trading volume, with its proprietary XBTUSD perpetual swap contract and futures contracts that offer users up to 100x leverage from the long and short side.

Remarkably, in the past 24 hours, there was close to $100 million notional of long bitcoin swaps and futures positions that were auto-liquidated on Bitmex. When the capital in a trader’s account reaches a level that cannot cover further losses, Bitmex auto-liquidates the trader’s position at the market. That means that Bitmex automatically creates sell orders, some being extremely large, to close the long positions that run out of margin capital. As you can imagine, the @BitmexRekt Twitter stream was lit all day long.

This was a string of tweets from the midday hours of the late session: 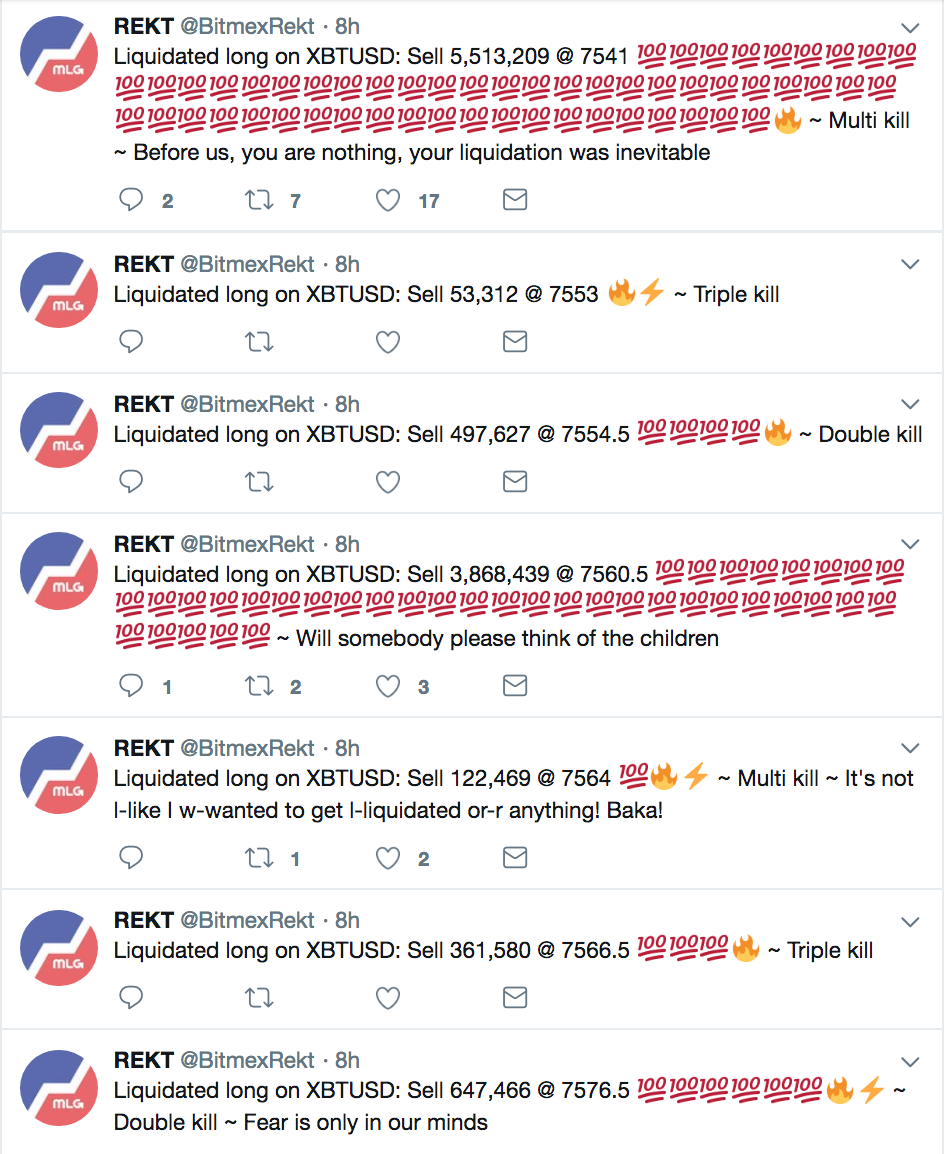 The sell-off in bitcoin/USD markets accelerated throughout the early morning and midday hours, as the volume of liquidation increased dramatically, causing a cascading effect in price.

The most dramatic market activity typically occurs when traders and investors throw in the towel or capitulate, liquidating positions to avoid further losses or because of a lack of margin capital. Today was one of those days and the streams of the 23,000 followers of @BitmexRekt were reminded far too often with the tweets of massive liquidation.