Technology Could Be About to Change the Way We Shop…Again

Over the past few decades, the way we shop has changed drastically. There was once a time when almost all of our shopping was done via traditional local stores, – grocers, butchers, bakers, and newsagents. In 1930, the first supermarket opened. Supermarkets sold many of the same things as traditional stores. Their main selling point was that, for the first time, everything was available in one place, making shopping easier and more convenient than ever before.

Supermarkets introduced more consistency, lower prices, and a greater variety of choice to their customers. As time passed, they also began staying open for longer hours. Naturally, more and more customers started choosing to shop these chains over local stores. Many of the local stores could not keep up with this competition, and they ended up shutting down.

It wasn’t until the mid-nineties until we witnessed the introduction of e-commerce. Amazon and eBay were both established in 1995. While traditional brick-and-mortar stores were limited, online retailers could offer virtually any item in the world to their customers.

How Has Technology Shaped Retail?

Technology has become so integrated into retail that it has now become almost impossible to imagine being without it.

The rise in technology is a huge step forward for buyers. We’ve reached the point where it’s become very rare for a customer to walk into a store without any idea of what they’re looking for – they’ve often spent a significant amount of time researching online first.

As a result, customers no longer have to rely on salespeople to help them make informed purchase decisions. In fact, the customer often knows far more about the product they’re interested in than the staff members in the store do.

The introduction of online shopping has provided significant benefits to retailers, too. Gone are the days where employees are required to chase customers with a clipboard to try and find out what they thought about the quality of service. Customer feedback is now instant. Stores can find out where their services are lacking, and improve themselves quickly.

Similarly, innovations like self-service checkouts mean that the shopping experience is faster than ever before. This is great news for convenience stores and supermarkets where time is of the essence, and profit largely depends on how fast they can get customers in and out of the door on a given day.

With the steep rise in the popularity of blockchain technology, it is becoming increasingly likely that retail could be on the cusp of another revolution.

In fact, startups like Shping are devoting all their time and energy to making shopping smarter, more convenient, and more rewarding for customers. 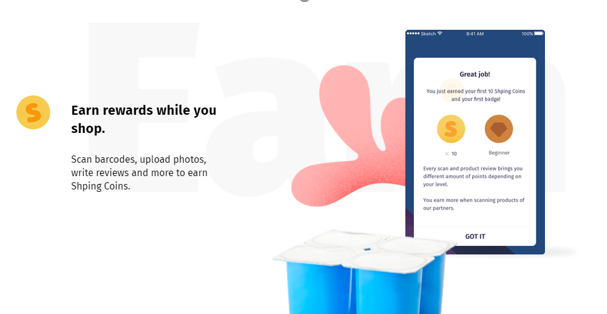 The way the application works is simple. Users simply download the app on their phone, then use it to scan any product barcode. From this, they can learn what’s in it, where it’s from, and whether or not the product is authentic.

Shoppers can also see other people’s experiences and reviews of the products they are interested in, which can help them to make an informed decision about whether or not they want to buy the product. In return for posting their own opinions and reviews of products, users will be rewarded with Shping coins which can be stored, spent, or exchanged.

The platform combines the fun of retail shopping with the convenience of e-commerce while providing users with instant feedback. It even gives brands the opportunity to channel their budgets directly to the people who matter most – their customers – instead of losing massive chunks of their profit to a chain of middlemen.

Could Blockchain Inject Life Back into Brick and Mortar Stores?

There have been many speculations about what the future of retail will entail. You’ve probably heard about the trouble that many brick-and-mortar stores have been facing. Even some of the most successful chain stores have witnessed major closures over recent years.

However, there is no doubt about it that buying products in-store adds something valuable to the process of shopping that just can’t be achieved by sitting behind a computer. Combining the ease and simplicity of e-commerce with the instant-gratification of shopping in-store could be just what it takes to inject the life back into brick-and-mortar stores.