Gaze Coin: The future of Gaze in virtual reality worlds

Immersive virtual worlds, which users can navigate using their gaze and a virtual wallet of cryptocurrencies, are closer than you might think. Jonny Peters, CEO, and founder of Gaze Coin, takes us on a journey through this not too distant future.

It’s early Saturday evening and you just can’t decide whether to go to that party your colleague has invited you to. You’re tired from last night and you know that the DJ who is playing really isn’t your thing. You don’t want to make the effort to get across town but you still want to do something.

And that’s when your VR tech on the side table catches your eye. Your mind is made up and, instead of grabbing your keys and heading for the door, you slip on your headset and gloves.

In an instant, your perspective changes as the claustrophobic walls of your tiny studio apartment vanish and you’re stood in the large, open lounge of the lakeside mansion you recently bought. You look around at the space you’ve enjoyed designing from scratch, having picked this spot because it was recommended by a friend with a place on the same street. He earned some coins from you as a commission but you don’t mind. Your place is fantastic!

To your right, you see your virtual assistant Lex waiting on you. You look left towards the games room that you added recently and see an augmented dashboard showing you all the arcade games available.

“I’ve got time for a quick game,” you think and pick Martial Artist, the most popular one around right now, for which you still have some leftover coins in your virtual wallet.

Once you’ve had enough, you return to the lounge and look through the huge glass doors and beyond the glistening swimming pool. With an instantaneous leap forward, you’re transported to the lakeside at the edge of your property. The sun has faded but the night is young. Across the water on the other side, you see pockets of light and hear the beat of some music that draws your attention.

As you look at one of the venues where the light is coming from, their music becomes louder while the others fade away. Your gaze stays on it and you’re shown a line up of who is playing tonight and…wait, Snoop Dogg is playing in one hour!

Amazing, that’s just who you want to see right now. What are you waiting for?

Even though you know you’ll need some of his coins to use at his venue, by confirming you’ll be there later, the event’s smart contract can instantly exchange some of your remaining gaming coins for venue coins.

With this sorted, you turn back to look at the large bedroom that dominates the first floor of your mansion. Lex knows that, with Snoop Dogg playing, you want to look good and has already picked out a couple of options.

Alongside these, there’s also something new to see from YouLook, the most sought-after VR fashion around, and you know that they’ve paid to be amongst your choices. Rightly so too because, having looked at it from every angle, that’s the one you go for. “That was easy,” you think, as you’re shown the virtual receipt for your purchase that the smart contract has produced.

Looking and feeling great, you’re ready to go. You could go around the lake, taking in a few different spots on the way, but you’re already in the mode for your favorite music. So you decide to teleport to where Snoop Dogg will be playing using his radio wormhole, watching and listening as his greatest hits transport you across the lake.

When you arrive, it’s more like a carnival and the arena is packed!

“Of course it is, dummy,” you think to yourself as you realize why. This venue must be sponsored by a brand, so everyone is being paid to be here – artists, performers, attendees and you.

Then you see the company’s logo above the main stage and think what a great experience they’ve put together. The music’s pumping, the people are dancing and everything you can see is awash with fireworks, performers and visual displays like you’ve never seen. You even set off a few virtual fireworks of your own, using your gaze to pick the ones you want from a nearby stall and paying instantaneously. Wow, that one filled the whole sky!

Next, you see some masks and flags on sale that will add to the carnival atmosphere, so you exchange the fireworks you haven’t used for these.

“Maybe one day I can create my own world to rival this,” you think.

It’s definitely possible, as you know anyone can create their own worlds with their own coins. All you need is a great idea. For now, though, there is so much to explore, with different arenas and bars to go into, as well as wormholes that take you to see other musicians. You see one for Lana Del Rey and the augmented entry point shows you that you can just jump straight in, with your coins exchanged instantly for you.

Look! There’s even a casino over there where you can gamble your coins and win other cryptocurrencies. But your choice is made. You’re here to stay, to take in as much as you can of the experience around you.

The beat of Snoop Dogg’s first song starts playing and the crowd goes wild. It’s going to be a great night!

Gaze Coin is the killer app for immersive advertising, allowing brands to:

• calculate precise ROI on VR/AR advertising and other VR/AR activations,
• collect meaningful data on consumer behavior in VR/AR, and
• evolve the ad format from interruptive ads that obstruct VR/AR experiences to more native, engaging formats including even becoming the entire experience.

Gaze Coin also includes a mechanism that calculates and tracks content as it is changed and/or added to inside VR/AR – storing that information in its proprietary blockchain.

More information on Gaze Coin can be found in its white paper. 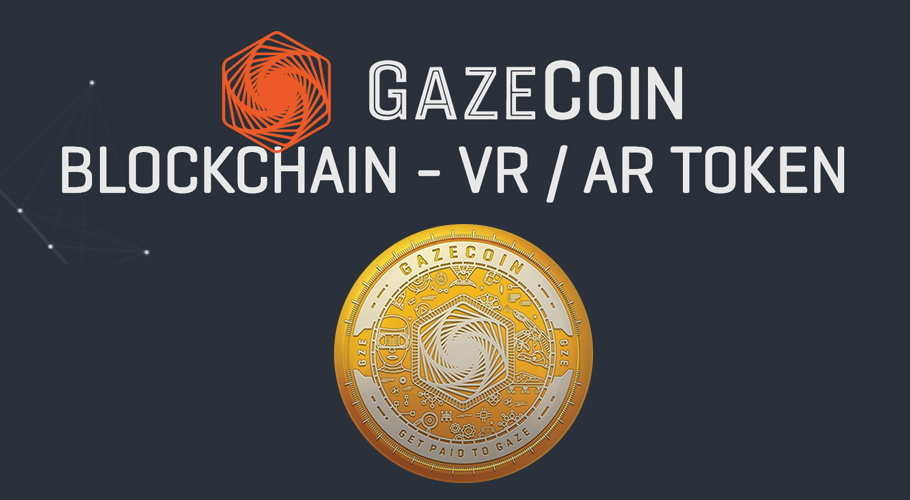