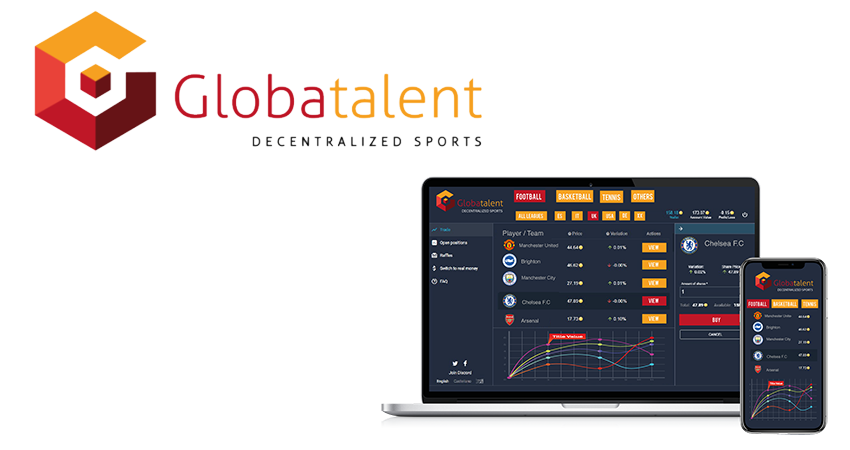 Globatalent, a platform which is set to disrupt the $100 billion sports rights industry by allowing fans and investors the chance to support players and clubs, has announced a token pre-sale targeted at accredited investors. The pre-sale will run from December 11, 2017, to February 20, 2018. Based in Spain and supported globally by a group of sports industry and blockchain professionals, Globatalent is co-founded by CEO Sunil Bhardwaj, Jon Fatelevich, and Ferrán Martínez. Having their own unique experiences within the industry, each of the co-founders has established a passion to disrupt, revolutionize and increase the transparency of funding across sport.

As an answer to financial difficulties preventing both players and clubs from realizing their true potential, the co-founders at Globatalent have developed a decentralized platform built on the Ethereum blockchain, giving players and clubs the opportunity to fund themselves by giving a percentage of their future revenue rights to fans and token holders. This way, financial control is being taken away from the few dictating investment companies and is given to fans who are already emotionally invested in their favorite clubs and players.

Moreover, the fans will not only benefit from becoming more intimately engaged with their sporting heroes and teams but also receive tokenized rewards. Players will also benefit from this shift of control. Previously not possible in a centralized structure, the Globatalent platform gives players greater power over how much of their future income rights they are willing to exchange in return for funding.

“Through the Globatalent platform, clubs will be able to tokenise their rights and enjoy all the benefits of having star players in their team. As well as this, the platform will give talented prospects, fairer and more appropriate funding by giving them more autonomy over financial arrangements. As we all know, sport is cherished internationally, and in today’s globalized community, Globatalent is giving sportsmen and women a clearer pathway and greater scope when planning their future careers.  Anyone, anywhere who believes in a player’s ability can take part in the public token sale in May 2018.”

The funding will be fixed in smart contracts and tokens will be released and distributed once players and clubs reach their goals.  In keeping with the principles of integrity and transparency, all the token holders and sports players have access to profiles, achievements and future development plans via the Globatalent platform.

“This initiative is rooted in the co-founders’ desire to give back to a community which they believe has given them so much over their careers. Being given the opportunity to represent your country in the sport you love is an honor like no other, and it shouldn’t be limited to a certain few. I believe all those with prospective talent should have the opportunity to pursue greatness in their chosen sport. That’s why alongside the platform, we are also setting up a grassroots program where projects will be selected for funding by the token holder community.”

Professional players who share the Globatalent vision have been recruited into sports advisory and ambassador roles.  This includes US-based former LA Lakers star and vice president of the NBA players association, Maurice Evans who has twelve years’ experience playing at the top level in basketball leagues across the world. The platform covers a vast array of sports including soccer, basketball, American football, golf, handball, cricket and many more.  Currently, Globatalent has two major clubs that will use the platform including Spain’s leading female handball team and the La Liga outfit, Levante UD.

For more information please see the whitepaper and visit the Globatalent website.