Vice’s new model for the adult industry has been developed at a time when 62% of revenues generated in the adult industry come from traffic, with only 24% of that figure being made up by content. Vice aims to solve this monetization issue by establishing a traffic programme that will capture traffic, use it to create tokens and then distribute them back to viewers, curators and programmers.

“Vice token is an exciting opportunity to bring a completely new and unique business model to the market and, for the first time, offer our customers the ability to be paid to interact directly with our brand. Vice tokens are a nuclear event. The catalyst of Vice and Penthouse will forever change the way the world watches TV and adult video online.”

“What we are doing with Vice token will separate the future from the industry dinosaurs. Online video and TV is entering into a whole new phase no one ever dreamed of. The genie is out of the bottle and for many media companies, it could be an extinction event. We are changing the way people worldwide watch TV and video. I agree with Kelly Holland of Penthouse – this is a nuclear event. We have a universal cryptocurrency technology that pays people to watch video or TV.”

The Vice Media Token is built using Smart Media Token protocols being developed by Vice and its partners. What Vice is building is unique and creates a simple engagement-oriented protocol used to facilitate the creation and exchange of tokens between participants in media consumption.

Paid blogging platforms like Steemit currently have roughly 400,000 users and a market cap of over $200 million. The potential for Vice websites video users ranges from 100s of millions of users including daily traffic to a potential user base of over one billion users and viewers worldwide.

The pre-sale for the ICO starts next week and aims to raise between $25 million and $50 million. The public ICO was to begin on , latest updates from Vice now have the crowdsale commencing on Feb. 1st, 2018. 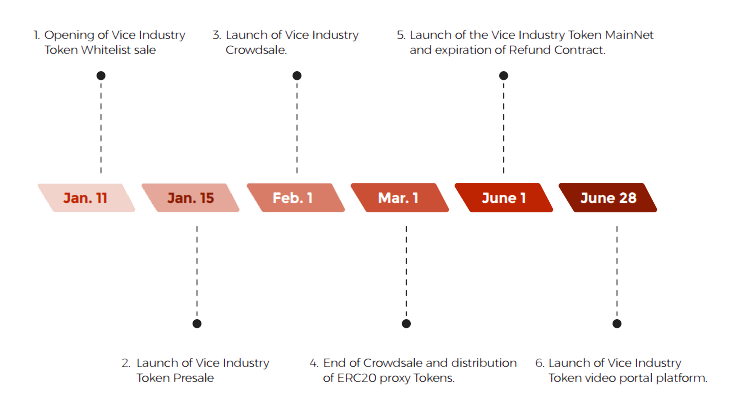