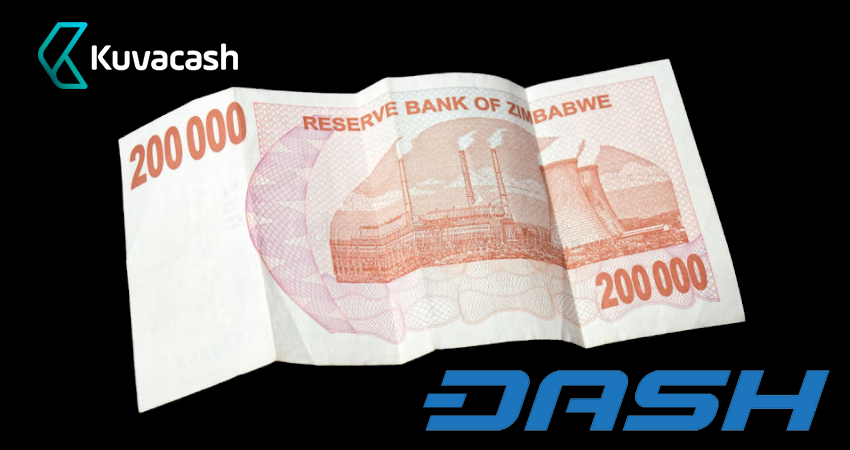 The Dash core team of crypto-asset DASH today announced an arduous joint venture with KuvaCash, a program designed to solve Zimbabwe’s ballooning inflation, collapsing currency, and declining national economy. KuvaCash is a Dash-record $550K USD undertaking, funded directly by the Dash treasury via its unique governance model, and aims to provide Zimbabwe with its first-ever peer-to-peer localized cryptocurrency payment service for anyone with a phone-number-based messaging system.

Currently, locals wait hours in bank queues to access their money and are experiencing exorbitant fees on transactions. The Zimbabwean Government has tried to address the crisis by issuing bond notes matching the price of the U.S. dollar as a fix, but this remains a stop-gap measure, rather than a permanent money system.

Following the resignation of Zimbabwe’s President Robert Mugabe today, much of Zimbabwe is looking forward to a new chapter in their country’s history, especially renewed economic vitality. Mugabe presided for 37-years over the deepening economic crisis in Zimbabwe, where people are on average 15% poorer now than they were in 1980.

“I have been advocating for quite some time the potential benefits Dash can provide to economies with less stable currencies, and Zimbabwe seems a prime location for these benefits. This project, in particular, is well-researched with value propositions, branding, and go-to-market strategies tailored to the local market. Combining the ideal network – Dash – with a well-considered strategy should lead to a high probability of success.”

Set to commence in Q2 of 2018, KuvaCash will introduce a cash replenishment model to instill confidence in residents, allowing them to cash out their digital currency into USD fiat at any time, greatly reduce transaction fees, and provide enhanced financial security and liquidity. Dash is the only cryptocurrency that allows instant payments between individuals and businesses at an incredibly low cost of about three U.S. cents per transaction, compared to approximately $5 USD fees per bitcoin transaction, giving Zimbabweans a globally traded currency they can feasibly trade, spend, and receive, either locally or internationally.

“The informal economy has U.S. dollars in circulation, but they are no longer being managed by banks and are physically quite dirty. People are scrubbing bills and hanging them up on clotheslines to dry, selling the cleaner bills at a 10-20% markup. The bonds the Zimbabwean government introduced in 2009 (pegged against the USD at a 1:1 exchange rate) are a stopgap measure, we don’t know what the long-term plan is for these notes but it is fair to say that Zimbabweans currently prefer USD bills to extant mobile-phone based payment solutions or bond notes.”

KuvaCash is pursuing a money exchange and remittance license in Zimbabwe and the project is expected to receive government and reserve bank backing.

“KuvaCash has the potential to greatly lower the costs of transacting and provides consumers with a store of value that is more easily secured than the physical cash used today. Combined, this should result in dramatic improvements to the economy by lowering the barriers to conducting commerce and savings that citizens face today. If our pilot in Zimbabwe is successful, we will possess a reference roadmap for addressing similar issues in other countries suffering from hyperinflation and volatile economic conditions.”

KuvaCash will launch as a free, downloadable app to allow the seamless execution of trades, exchange to and from USD, as well as mobile payments and top-ups. The initial launch will service agents that will facilitate the infrastructure on the ground, ensuring physical kiosks are available for Zimbabweans looking to opt for a supplementary method of payment.