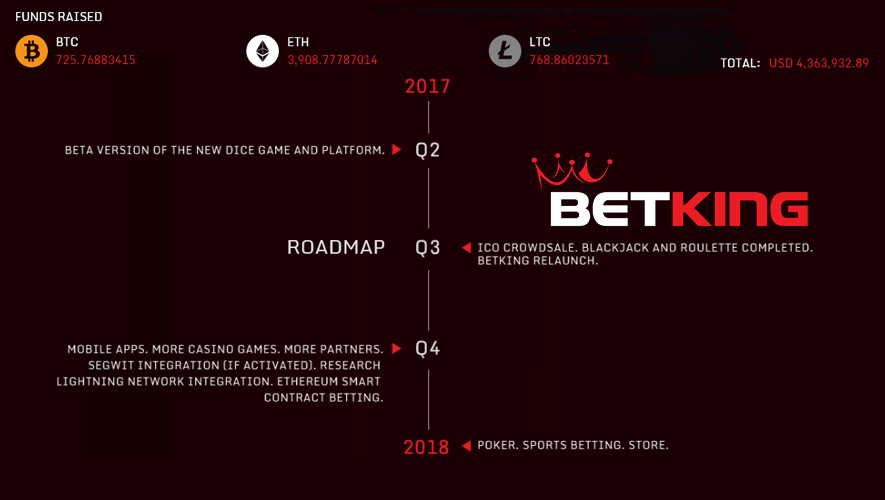 BetKing.io, the cryptocurrency enabled betting platform who announced their relaunch this year, has so far raised over $4 million dollars in its uncapped token offering to run through September 4th. This is also the date that the initial platform will launch live for all users. The $4 million includes the $1.2 million raised in the pre-sale conducted last month.
Funds Raised Breakdown (as of August 23rd)
BTC: 725.76883415
ETH: 3,908.77787014
LTC: 768.86023571
TOTAL:
USD 4,352,426.90
Interesting to note is that the company is capitalizing on the mega boxing match between Floyd Mayweather and Conner McGregor this Sunday and allowing users to make bitcoin-denominated bets.
This one-off event targeted release of the sports platform on BetKing.io comes early, as this feature wasn’t to be released until 2018. We can thank the boxing match for providing the impetus to get the platform up and running earlier than expected, it will be a good showcase and preview of the eventual full system offering.


The latest odds on BetKing show Mayweather as the heavy favorite at 1.1904 and McGregor the underdog at 5.3, BetKing has a 1 BTC limit on the bout.
A beta testing account page and new ICO website have been available since last month. The newest features added for player accounts include the ability to whitelist IP addresses, allowing only specified IP’s to login to accounts and also the ability to hide bets and gaming stats from other players.
The owner of BetKing recently proclaimed:

“The history of BetKing is well documented and easily verifiable. Also, most (token) buyers are either previous investors or know previous investors and talk to each other about it or know BetKing or me. There is no team page because my team is contractors and some prefer to remain anon. Listing some developer names or profile pics would not add any credibility to this project.”
“All the trust comes from me and the fact that I ran BetKing for 3.5 years without any issues and returned 6000 bitcoin to investors when I closed instead of doing an exit scam or running with the funds. No resume or profile pic can give that kind of trust.”
“There is no LTD company yet. I am in chat with a lawyer right now actually about setting up a new company in Costa Rica and details will be released before the launch of the new site.”

By the end of the year, according to its roadmap, BetKing is looking to implement Ethereum-based smart contract betting along with mobile application releases. Lastly on the current roadmap and maybe most important, will be the launch of full poker and sports betting platforms, supposed to come online during 2018.