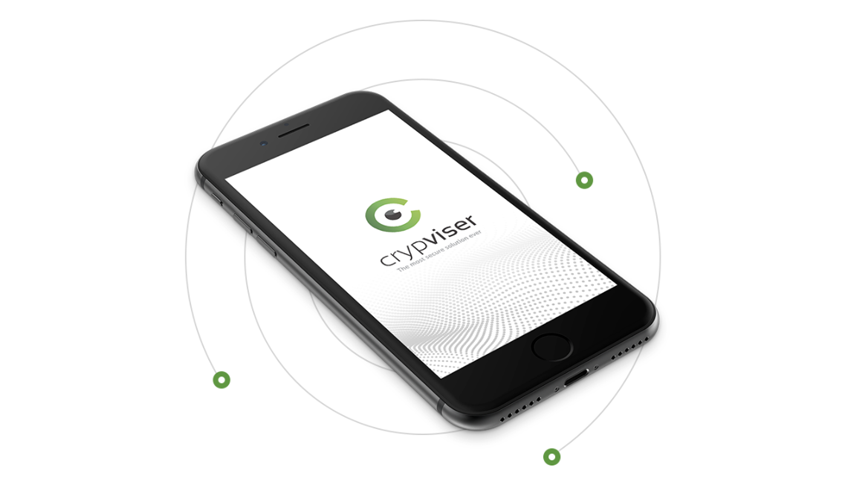 Below you will find a rundown of Crypviser’s CVCoin ICO which is taking place until June 30, 2017. The company plans to introduce its alpha testing phase in July 2017, with public beta testing starting in August. By September 4, 2017, they hope to launch their full platform to the public. That platform will provide secure communications for private entities and enterprises.
What Is Crypviser?
Crypviser describes itself as “a disruptive, encrypted all-in-one network for social and business communication based on blockchain technology.” Basically, it’s a communications platform with enhanced security.
It lets you securely store and exchange data – like instant chats, voice, video calls, and group calls – while meeting the highest encryption and security standards.
Crypviser’s services are catered towards the B2C and B2B markets. The company claims that encrypted products like their own were previously only available to organizations with a lot of resources – including the biggest corporations, financial institutions, governments, and secret services. With Crypviser, the technology is available to anyone.
The Switzerland-based company behind Crypviser, CVChain GmbH, is aiming to launch their platform by September 4, 2017. Alpha testing will begin in July, and public beta testing will begin in August.
Overall, Crypviser aims to be “the most secure solution for confidential interactions”.
What Is CVCoin?
CVCoin is a cryptocurrency created by Crypviser. The currency’s initial coin offering (ICO) is taking place until the end of June.
Users and businesses will be able to access the Crypviser network using the CVCoin token. The main purpose of the coin is to cover the charges of blockchain transactions for authentication purposes.
It allows the authorization and identification of users’ public encryption keys, which helps to maintain the highest level of security within encrypted networks.
Public key authentication is obviously a crucial part of every cryptography model. Crypviser is designed to provide genuine encryption key identification with the goal of preventing manipulation, interceptions, and “Man in the Middle” attacks on all communication levels.
Other uses for CVCoin include as a product-related cryptocurrency. It allows users to pay for Crypviser services – like monthly subscriptions. The coin will facilitate anonymous payments, which means organizations can access Crypviser without disclosing their payment information, bank account details, or other personal information.
Today, CVCoins can be purchased with Bitcoin or Ethereum, or bought with a wide range of altcoins using ShapeShfit.
The initial exchange rate of CVCoin is related to the base monthly subscription price of the Crypviser Network, which works out to a price of around 0.99 EUR for 1 CVCoin. Crypviser wants to make sure its coin is stable: on the Crypviser Network, the exchange rate will always be 1 CVC for 0.99 EUR, regardless of the public marketplace.
Crypviser CVCoin ICO
CVCoin ICO is scheduled to last 40 days, taking place between May 20 and June 30, 2017. During the campaign, the company is distributing 15 million CVCoins in total. Early investors can get discounts of up to 30%. 10 million CVCoins will be released during the pre-ICO phase, and 5 million coins will be allotted for future distribution to team members.
Once the Crypviser Network is launched, investors can sell their purchased coins to other Crypviser customers at a nominal exchange rate. After the ICO is complete, CVCoin exchanges will be available “on all main stock markets”.
Money raised during the ICO will be used for mobile development (55% of funds), backend development (15%), infrastructure (10%), licensing fees (7%), legal services (3%), operational costs (5%), and marketing (5%).
Crypviser CVCoin ICO Benefits
Discounts: Discounts are available throughout the ICO, ranging from 25% in the first week to 5% in the final week.
1500 CVC Minimum: Get Crypviser first and participate in the beta test phase.
3000 CVC Minimum: Enjoy 6 months of the full-featured CV Best subscription for free.
5000 CVC or More: Enjoy one year of the CV Max subscription, which comes with advanced features.
7000 CVC or More: Receive an additional 10% bonus in CVCoin on top of your purchase.
More than 25,000 CVC: Get an invitation to the market launch of Crypviser in Germany and explore opportunities to become a distribution partner.
All Investors: All investors who invest a minimum of 10 BTC will receive a bonus package including an invitation to the beta testing phase, VIP status for your account, special and hidden features, free and unlimited transfers, and a bonus program.
Crypviser CVCoin CVPay
In addition to the core Crypviser platform, the company is offering a payment platform called CVPay. CVPay will enhance the usability of CVCoins. With CVPay, users can enjoy unlimited, fast, and secure CVCoin transfers between users regardless of their location and residency.
The CVPay platform is integrated into the Crypviser app, which means sending CVCoin is as simple as sharing a photo. Overall, CVPay promises to be a secure, instant, anonymous, and reliable payment platform.
Who’s Behind Crypviser?
Crypviser was founded by CEO/CTO Vadim Andryan, who has been awarded the CCNA and CCNP degrees of IT security and cryptography. He has a broad knowledge of computer science and data encryption. Since 2007, he has founded multiple telecommunication companies in several countries.
The company is also led by Co-Founder and Director Waldemar Konradi, who has extensive practical experience in the telecommunication industry. Full details about the team – including the escrow team – can be found online at ico.crypviser.net.
Crypviser is made by a company called CVChain GmbH. They’re based in Zug, Switzerland.
Stay tuned for more information about Crypviser as the company releases its platform over the coming months.