Announced today from South Korea-based bitcoin exchange Coinone is the official launch of Ripple (XRP) trading. The date of the listing will be next Monday, May 15th. Ripple (XRP) is a unique encryption currency used in the Ripple protocol which is emerging as a next-generation global payment network.

Through this token and Ripple’s distributed financial technology, anyone in the world can send payments in seconds and cross-border. KRW and SGD currencies will be supported in transactions to deposit into XRP. Margin trading is expected to open sometime in the future with support from only KRW.

Transaction Fees – Will apply as same as every other cryptocurrency. However, because Coinone is a partner of Ripple Labs, there will be an introductory 0% fee schedule.

Fee Rebate – Users can trade Ripple (XRP) on Coinone for a full fee rebate which means 0% commission. Once the total amount of all rebates from the exchange reach USD $25,000, the fee rebate event will end. Once the limit is reached, the fee on XRP trading will be applied as normal.

XRP has soared in price in the last days to at one point on Monday overtake ETH as the number two cryptocurrency by market cap but has since fallen back to number three.

In the last 24-hours from the time of writing, XRP has shot up more than 40 percent against USD and others, top markets from XRP are shown below: 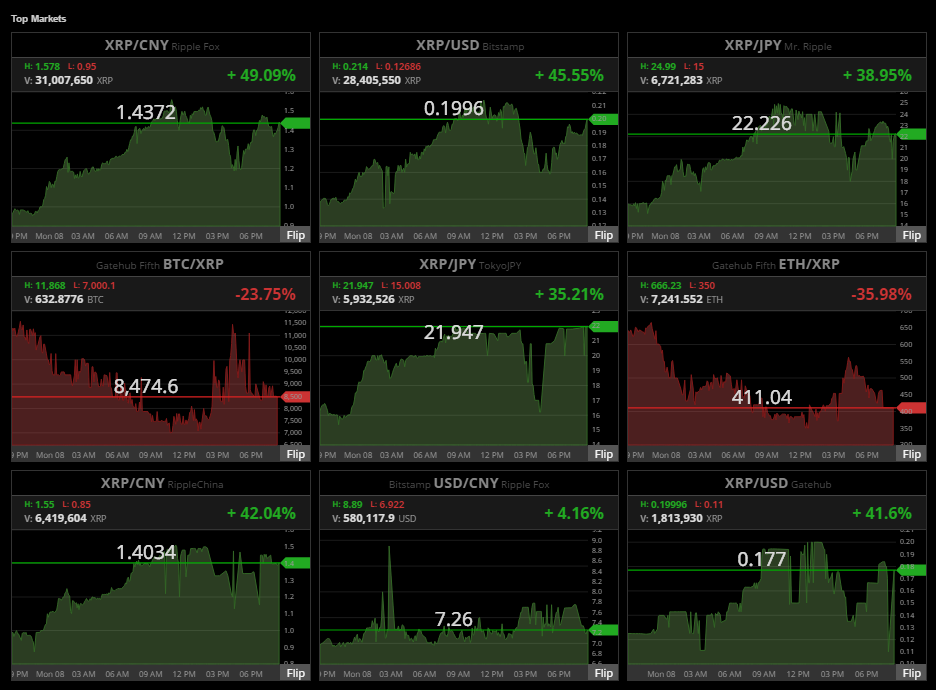 XRP/USD is now trading at around 0.1900 at the time of writing. Below from RippleCharts is the all-time XRP/USD chart using Bitstamp data:

Ripple, a provider of enterprise blockchain solutions for payments, today announced Banco Rendimento has launched with RippleNet Cloud. As the first bank to use Ripple technology entirely in the cloud, Banco Rendimento joins nearly...

DeeMoney, a fintech company based in Thailand specializing in digital cross-border money transfers, has announced its platform is now processing live transactions, in partnership with Ripple, the enterprise blockchain solution for global payments. Through...