Connecting crypto and business – the best of both worlds?

” Another advantage is the access to a large world of benefits if one holds the coins centrally in the SANUSAPP. In this case, you can pay with SANUSCOINS at SANUSLIFE and all partner companies at lightning speed. For each SANUSCOIN transaction, the customer receives a cashback, both at all stationary points of sale and in all online shops. The entrepreneur, on the other hand, gets many new customers through the acceptance of SANUSCOINS.”

Cryptocurrency continues to see increasing adoption and more support from a vast international audience. It is a form of payment that can be exchanged online for goods and services. In addition, some companies issue their own currencies, which can be purchased and then used in the form of tokens to buy their products.

Cryptocurrencies are independent of regulation, inflationary forces, and the banking system in general. All ostensibly great reasons for the popularity of crypto. Value is primarily determined by supply and demand, with very few external factors playing much of a role.

The blockchain system is incredibly inefficient when it comes to the amount of power spent in managing transactions. Thousands of energy-consuming computers manufacture and transact cryptocurrency. With the move to more sustainable and green initiatives, this crypto element has come in for some criticism.

Due to the duplication of transactions over many computers, all networked through the internet, transactions take a long time and, compared to the traditional banking model, are slow in comparison.

On the other hand, Federally controlled banks offer payment services such as VISA and Mastercard, facilitating payment for goods and services. This happens through a highly sophisticated and efficient international payments network. Payment is made in the form of actual currencies such as Dollars and Euros.

The traditional payment system network is incredibly efficient and fast and does not require the type of energy demand.

In 2018 a company called SANUSLIFE, founded by Ewald Rieder, responsible for the quotes above that we are unpacking, developed its own crypto token. It uses the Bitcoin blockchain. In 2018, exactly 777 777 777 tokens were stored by the company on this blockchain. The company distributes one-seventh of these tokens per year in exchange for the company’s cashback credits.

SANUSLIFE has developed a closed system for its network of stores and merchants around the world. All of these have access to the stored tokens on the blockchain. In addition, the company has developed an app that connects all of the players in the closed system.

And this is where it gets clever – the tokens are then simultaneously stored at a custodian bank, where they are offered as a voucher as an alternative payment method. The payment system used by the bank is used to affect the payments. 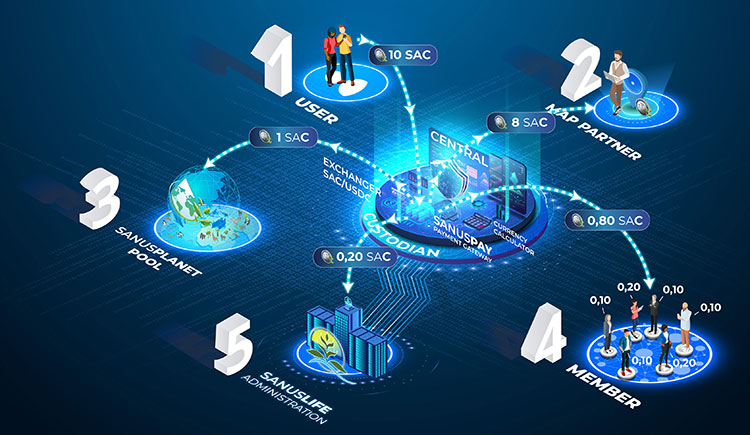 This type of experimentation with the two systems may well result in a hybrid that takes each system’s best elements and eliminates the worst for the benefit of all parties. It remains to be seen in practice how this translates but hats off to Ewald Rieder for being visionary and pushing the envelope. Crypto is still in its developmental stages, and it needs constant innovation to improve. It could well be that this innovation requires a hybrid approach.