PayPal’s move into crypto was inevitable, and more companies will follow suit

Daniel Polotsky, CEO of CoinFlip, a leading Bitcoin ATM operator in the U.S. spoke with CryptoNinjas in December 2019 when he first found out about PayPal’s move into crypto. Now that it’s finally public, he’s here to share his thoughts on Square vs. PayPal and how PayPal’s entry will affect financial inclusion and crypto adoption.

In a letter sent to the European Commission, PayPal confirmed that it is developing cryptocurrency capabilities. It has been widely speculated that PayPal and Venmo will roll out a feature involving direct sales of cryptocurrency to its 325 million users in the next few months.

This move comes just months after news of Square’s growing success with Bitcoin sales through Cash App. For companies like Robinhood, Square, and now PayPal, selling cryptocurrency has been a high-upside revenue stream that attracts large amounts of new customers.

PayPal is also researching how cryptocurrency and blockchain technology “can be utilized to achieve greater financial inclusion and help reduce/eliminate some of the pain points that exist today in financial services.” It will be interesting to see how PayPal can expand its role as an alternative financial service provider and utilize crypto to better serve communities like the unbanked and underbanked.

PayPal has been laying the groundwork for this release for months. Back in December 2019, I noticed their outreach efforts and started preparing for their entry into the market. It is my belief that more and more companies will find it hard to stay out of crypto. When giant firms like PayPal pull the trigger, it’s a massive signal to the rest of the market to follow suit. There is significant pressure for companies to mobilize and grab their share of the market before the competition does.

Square’s Cash App began charging fees for Bitcoin purchases in November 2019. CashApp has been an overwhelming success with Q1 2020 revenue soaring to 367% YoY growth at $306 million from $65 million prior. Bitcoin-related revenue comprised more than half of Cash App’s total revenue in Q1 2020. In March, Cash App added its largest number of net-new transacting active customers, benefiting from significant shifts in consumer behavior. On the other hand, In the first quarter of 2020, Venmo’s net payment volume amounted to 31 billion U.S. dollars, representing a more modest 48 percent year-on-year growth.

Square’s Cash App has always been a larger portion of Square’s total revenue than Venmo with reference to PayPal’s overall revenue. This may also show why Square has aggressively marketed Cash App which currently has more than a million followers on both Instagram and Twitter compared to Venmo’s more modest 21K Instagram and 44K Twitter followers. Square has also collaborated with companies like Twitch and Spotify so fans can support their favorite creatives. Cash App seeks to leverage mainstream influencer audiences according to CEO Jack Dorsey.

The differences in marketing approach can also speak to different demographic targets across the two companies. According to a 2019 Instinet survey, consumers who use Square’s Cash App more often than Venmo tended to have lower-incomes, defined as less than $50,000 per year. In addition, more than 80% of Cash App customers had used prepaid cards in the past, compared with 45% used these cards less after beginning to use Cash App, suggesting that Cash App customers may hail from a larger “unbanked” audience.

This is not to say that PayPal will not find success with their rollout. PayPal already has connections within the industry, for example, its partnership with Coinbase to allow North American users to deposit and withdraw cash between the two platforms. While Cash App has the first-mover advantage, I expect PayPal’s volumes to eventually rival Cash App’s because of their access to a higher-income audience. 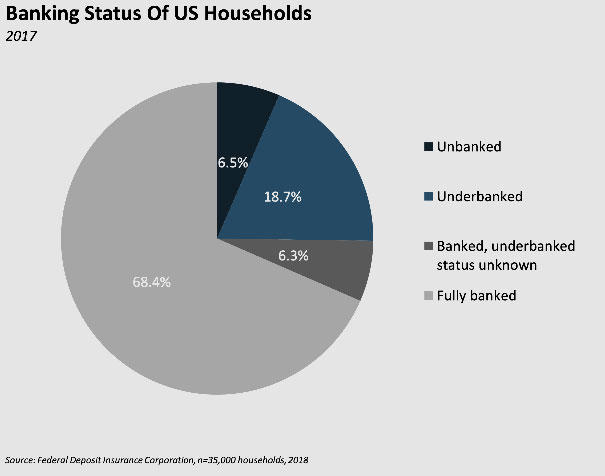 How Will PayPal Use Cryptocurrency and Blockchain to Increase Financial Inclusion?

The unbanked & underbanked struggle to access a variety of financial services and are often forced to turn to expensive alternatives such as payday lenders (an industry worth an estimated $90B in the U.S.), check cashing services, money transfer services, and many more. These individuals are bearing the full cost of financial exclusion. It’s estimated that unbanked and underbanked Americans pay 9.5% of their income on interest and fees from alternative financial services.

Cryptocurrency and blockchain have the potential to accelerate financial inclusion across the world. Individuals are granted greater access, increased transparency, and lower fees. There need to be new options for those who can’t or won’t join the banking system.

For example, according to a Mintel research report, the unbanked represent the most likely group to be open to peer-to-peer lending (24% vs. 14% of consumers in Canada). Crypto and blockchain can help P2P lending platforms become safer, more transparent, and quicker to use. Decentralized technology can also reduce costs for both lenders and borrowers, by removing intermediaries, improving transaction monitoring, and assisting in bad loan recovery.

PayPal has been vocal about its efforts to serve unbanked and underbanked audiences in the past. The company has evolved to become a financial service provider, offering services like bill pay, debit cards, and more. Will their exploration of cryptocurrency result in a foray into decentralized finance? Only time will tell if PayPal will realize its vision of using cryptocurrency for social good.“

How Will PayPal Influence Adoption?

Speculation around PayPal’s cryptocurrency feature may also spark renewed debates around cryptocurrency adoption. According to a 2020 report by the Economist, among respondents polled about major barriers to adoption, 28% said that there were too few options to use digital currencies, 25% said it is difficult to know where to buy digital currencies and 25% said the procedure to buy digital currencies was too complicated. Many of these barriers to adoption could be alleviated if PayPal and Venmo were to allow users to buy Bitcoin directly within their apps.

Regardless, these are exciting times for crypto in terms of adoption. New onramps like PayPal remove friction and bring access to untapped audiences. While crypto will remain niche for a little while longer, the technology is approaching the tipping point where easy access and proven value will help it break into the mainstream.

Daniel Polotsky, CEO of CoinFlip, a leading Bitcoin ATM operator in the U.S. spoke with CryptoNinjas in December 2019 when he first found out about PayPal’s move into crypto. Now that it’s finally public, he’s here to share his thoughts on Square vs. PayPal and how PayPal’s entry will affect financial inclusion and crypto adoption.