Kamari is an innovative mobile payments cryptocurrency aiming to unite one billion people across Africa in the first pan-African digital gaming platform. Kamari was created with the vision of a world in which mobile gaming, lotteries, and payments are united without borders. By integrating existing infrastructure and licensing with one standardized currency, Kamari will instantly offer an improved experience to hundreds of millions of people across Africa.

How It Will Work

The gaming applications will run within the Kamari ecosystem and be integrated with the Kamari mobile wallet. ZeU will be responsible for the technical construction of the project, building functionality that will allow current Mula users to utilize KAM currency.

MulaMarketplace users will be able to exchange KAM tokens with other marketplace users, which will open them up to the wider Kamari ecosystem. Additionally, Mula’s upcoming peer-to-peer microlending solution will work within Kamari’s ecosystem, which will enable any Mula user to access Kamari’s gaming and lottery ecosystem.

MulaMail is one of ZeU’s latest projects, a fully protected, end-to-end encrypted email and messaging system built on blockchain technology.

“We believe that this partnership with Kamari opens up unparalleled opportunities for Mula users. First and foremost is the ability to use Kamari Coin within MulaMicrofinance to lend or send money, which speaks to one of ZeU’s core values of democratizing cryptocurrency. The other is the ability to access Kamari’s ecosystem, which includes entry into the next big online gambling market, Africa.”
– ZeU’s CEO, Frank Dumas

ZeU has been working with blockchain gaming solutions since establishing a joint venture with St James House plc for online lotteries. St James is a diversified company delivering best-in-class products for Lottery and eCommerce in long-standing relationships with blue-chip clients, including household names and leading charities.

ZeU’s team is well equipped and experienced in developing cutting-edge solutions for this market, under the leadership of CTO Jean-Philippe Beaudet, an expert on technology for gaming and blockchain specialists.

The online and gaming space in Africa is booming, propelled by increasing mobile phone ownership and digital payment solutions. Africa is the world’s fastest-growing mobile market, with 444 million mobile subscribers. In South Africa, the video game sector had the fastest year-on-year growth rate (16.8%) in 2017 of any of the media and entertainment sectors led by the rise of mobile gaming via smartphones. Nearly 300 million new subscribers are expected to access the mobile internet in the next seven years.

Along with online lotteries, ZeU plans to expand its operations to develop blockchain solutions for the eSports market: the world of competitive, organized video gaming. The gamers have impressive followings, and millions of fans around the world watch their competitions. The popular League of Legends tournament in 2017 generated $5.5 million in ticket sales.

“By positioning ourselves at the very advent of eSports betting, we are capitalizing on its increasing popularity. The core audiences of the eSports market and the gambling market converge to create an enthusiastic audience for eSports gambling. The anonymized data will allow us to tweak the gambling experience and will create the opportunity for traditional betting establishments to refine their odds.”
– Jean-Philippe Beaudet, CTO of ZeU

There are even streaming services, such as Twitch, where viewers can watch gamers play in real-time. In 2018, around 395 million people worldwide watched eSports, with most viewers being from North America, China, and South Korea. The global eSports audience will grow to 453.8 million worldwide in 2019, a year-on-year growth of +15.0%.

2019 has indeed marked a major milestone for the global eSports market, says a report by Newzoo. This year, for the first time, the market exceeded the billion-dollar revenue mark. According to their studies, revenues will reach an impressive $1.1 billion in 2019, a year-on-year growth of +26.7%. 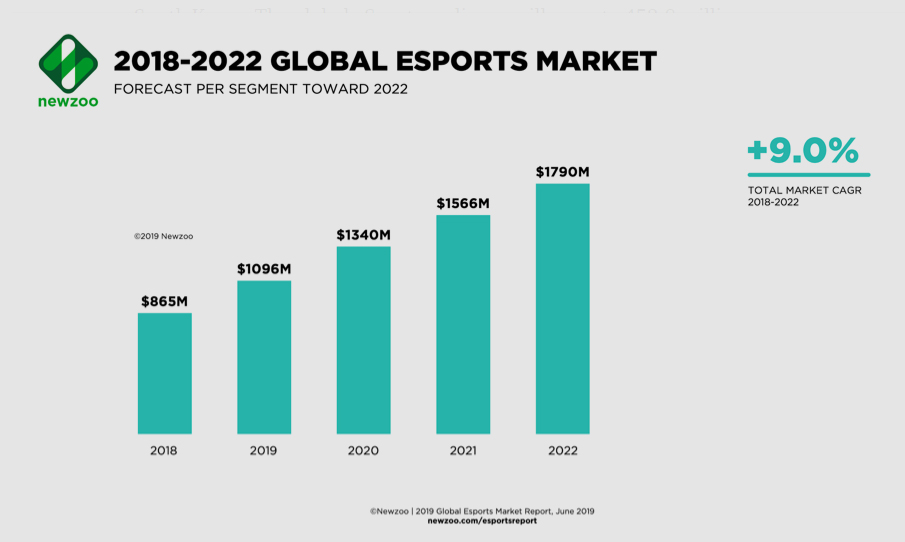 “eSports’ impressive audience and viewership growth is a direct result of an engaging viewership experience untethered to traditional media. Most of the industry’s revenue comes from media rights, advertising, and sponsorships.”
– Newzoo CEO Peter Warman

With the wider adoption of mobile phones in emerging markets and the advent of 5G, both the online gaming and eSports markets are expected to grow. Regions with a prevalent young population, such as India, where the average age is 29, look particularly promising for gaming services.