Best cryptocurrency to invest in 2020 – ShareRing

The legendary bull run of 2017 led to countless ICO projects attaining massive percentage growth over a short period of time; often with little more than a whitepaper and marketing. There were multi-billion dollar valuations for companies with no working products.

This was obviously not healthy for the overall crypto economy, essentially it has caused investors to expect instant returns and become lazy when carrying out the necessary due diligence in the projects they are investing in. But who could blame them? Every coin was pumping hundreds of % for no apparent reason.

Unfortunately, when this could not be sustained, the 2 years following this monumental run were filled with red candles and misery. ICO projects lost a lot of trust as scams and funding problems plagued ICOs and the crypto economy. We have become smarter however, what we are seeing now is a real yearning for projects that provide more than just a white paper and a fancy website. We want projects that disrupt the status quo, and show real-world adoption of the masses.

Unfortunately, there are not many, and the dream of a coin making another Bitcoin-like run seems lost.

A Blue Diamond in the Rough

Until now… I believe I have found the holy grail of hidden gems, a project with such magnificent scope it could truly become the Amazon of the sharing economy. Currently sitting at a minuscule $8 million market cap and due to launch Q4 2019; this blue diamond in the rough is named ShareRing, founded by Tim Bos in 2017. ShareRing is a total solution, servicing consumers and businesses alike. They connect the highly fragmented sharing economy by bringing together sharing services across all industries and geographies. Using ShareRing’s decentralized marketplace, users can securely access, connect, and pay for services anywhere in the world. Rental providers receive payments instantly, without any currency conversion fees, and with incredibly low transaction fees.

According to statistics, the sharing economy is projected to grow from $15 billion in 2014 to $335 billion in 2025. Quicker than ever, we’re shifting to the world of a shared economy. In the digital age we live in, where over 2.82 Billion people own smartphones, giants like Airbnb and Uber have disrupted and dominated their respective industries (hotels and taxis). This can be linked to the lack of adaption from hotel and taxi companies to the surge in popularity of smartphone apps, much like Blockbuster’s famous failure to adapt to online streaming services in the early 2000s.

However, companies like Uber and Airbnb are not unstoppable; enabled by blockchain technology, the sharing economy can be disrupted even further. For the first time ever, every sharing service you can possibly imagine is accessible under one app and one account.

On release, ShareRing will provide 2,600,000 hotels/lodgings, 1.2 Million cars, eVOA, insurance, and over 200,000 activities, tours, and events, with flights and much more to be implemented after launch.

Keaz was founded in 2013 by Tim Bos and is an extremely successful company. Keaz has about 34 employees in Australia, NZ, Vietnam, Hong Kong, San Diego, and Denver. Their primary focus is around their white label car-sharing platform; catering for B2B and B2C car-sharing (including community car sharing, corporate pool car, etc.)

ShareRing will process between 280,000 to 420,000 real TX per month on the ShareLedger blockchain from Keaz alone when launched, which would make it a top 20 coin concerning amount of transactions on day 1.

One App to Rule Them All

A universal Sharing app is in the final stage of development and testing. The app will feature geolocation-based services, enabling anyone that will allow anyone to easily see and use any sharing services within their immediate vicinity or desired location. Each business partner will also have the opportunity to develop the option of developing a ‘mini’ app within the ShareRing app, which will have functionalities specific to that partner’s business. For example, some hotels will allow users to check-in and unlock their hotel room all through the app, without any need for interaction with the front desk.

SHR is a utility token and will be used to pay for transactions on the network, such as ‘new booking’, ‘add asset’, etc.  SHR is used by providers to pay for their access to the ShareLedger blockchain, including the addition of assets, renting out of assets, adding attributes, adding smart contracts, and other features. ShareRing’s stable coin, SharePay (SHRP) is used by customers to pay for the rental of assets. Fees collected from transactions on the ShareLedger will be used to buy SHR tokens on the open market to pay masternodes; substantially magnify value for the ShareToken holders. 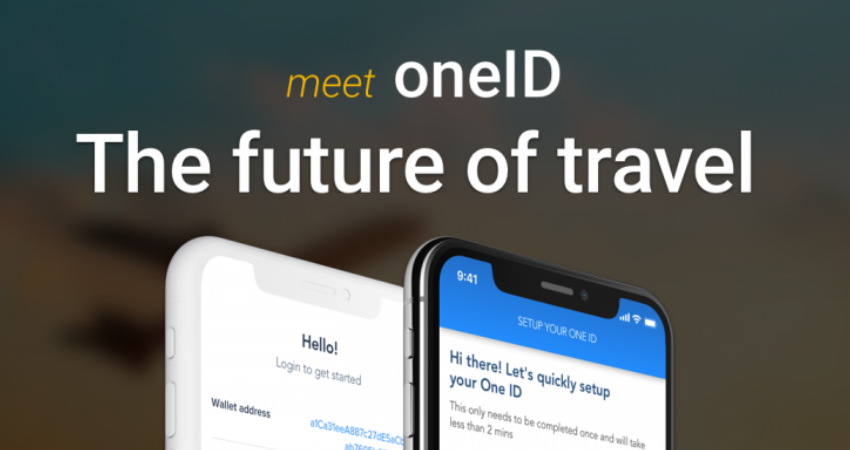 ShareRing’s OneID solution protects user’s data by handling Know Your Customer (KYC) information through Onfido and ShareRing’s Self Sovereign Identity Protocol.  ShareRing does not hold any identifying information anywhere. It provides ultimate security for the renter and also the provider, as the Protocol encrypts and stores your data in a secure enclave within your device. Essentially, this means that it is near impossible for a hack or data leak to happen, simply because there is no centralized honeypot of data for hackers to exploit.

The OneID module is very easy to use. The end-user needs to complete their ID submission only once, with the entire submission process requiring less than two minutes to complete. Once this step has been completed, the customers KYC is destroyed by Onfido and the OneID module will allow merchants to verify a customer’s identity via a hashed verification. This removes the need for merchants to store or see personal information; safeguarding both merchants and users from fraud.

As a reward for services provided, active masternode holders will be rewarded 50% of the fees produced on the ShareRing network. The distribution will be based on a calculation of the total amount staked and the total continuous uptime of the node. Initially, the remaining 50% will be provided to ShareRing Ltd (via ShareRing owned masternodes) for various purposes that contribute to working capital and platform growth. However, at some point in time masternodes will receive 100% of the fees generated on the network.

Staking is an extremely attractive option for holders who do not want the responsibility of running a masternode; and for those who haven’t been able to acquire one.

Staking rewards are estimated to range between 6% to 12% interest.

ShareRing is currently implementing a series of buybacks that started at the beginning of November. The buyback operation is done at a random time during the week.

The Buyback Program is expected to:

Buybacks are funded from profits collected with real-world profits.

According to a conservative calculation from ShareRing, the Live Group partnership alone could generate AU$3.6 million per year in buy pressure. 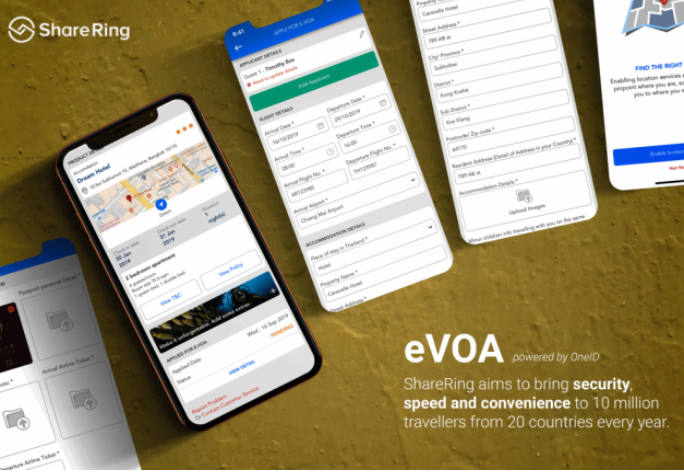 eVOA allows applicants to apply online and receive a travel authorization before departure – this eVOA can be shown at dedicated Thailand immigration counters on arrival at major Thailand airports, allowing travelers to pass through in minutes.

OneID system is scheduled to become the lynchpin technology in Thailand’s eVOA system; one of only two companies to partner with Thai authorities to provide this service. ShareRing provide the core technology stack (backend infrastructure) that will be used by one of the two eVOA partners.

“We are providing our OneID product for Thailand e-VOA (Visa On Arrival) that allows 5 Million + travelers from 20 countries including China and India to complete the visa process on their mobile through our app. This provides a streamlined immigration process that negates the need for an expensive and time-consuming process when you get off the plane. Additionally, fraud is mitigated with several extra layers of security in the back end including our blockchain (ShareLedger) consensus model that makes all data immutable and all but impossible to hack.”

This is a strong validation of ShareRing’s OneID System – immigration controls are some of the most scrutinized processes in any branch of government, and if the OneID solution can operate to their standards then it is truly business-ready.

ShareRing partnered with Live Group, who provide EFTPOS terminals to businesses in Australia. EFTPOS is short for Electronic Funds Transfer at Point of Sale; it is the most common solution for paying with cards in physical stores. Keeping Australia’s plan to go cashless by 2022 in mind, the numbers are the evidence of the attractiveness of this method: in 2017/18, Australian consumers performed more than 1.8billion EFTPOS transactions. Altogether these transactions amounted to AU$115 billion, spent at over 900,000 terminals. 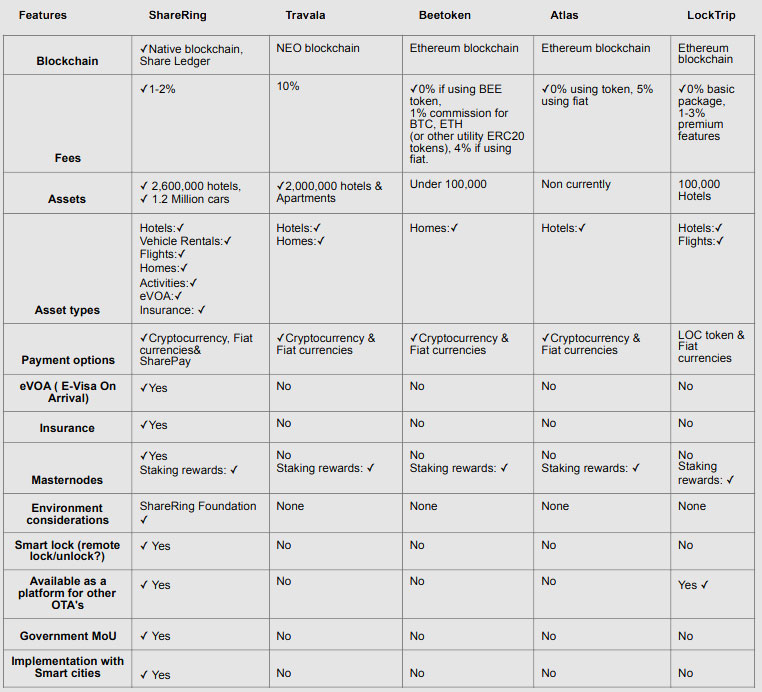 As seen in this table above are no comparable projects to ShareRing in the cryptocurrency economy. Unlike every project listed above, ShareRing is not only a content aggregator. They also aim to integrate directly with companies too. Companies can select services they want to use and give users the ability to book hotels based on environmental footprint.

With 20 major partnerships yet to be announced, B2B buybacks already happening and the app launch coming Q4 2019; ShareRing is poising itself to become a top 10 coin in 2020.

In the short term, ShareRing is expected to go above and beyond 100 sats. The App launch and increased B2B profits will have a monumental impact on the token value. In my opinion, ShareRing has the potential to hit $1 dollar at least over the next 2 years.