Preview of PegNet system, which is built on top of Factom...

PegNet, a project initializing a decentralized, non-custodial network of tokens pegged (stabilized) to different currencies and assets built on top of the Factom blockchain, is readying its launch to mainnet.

According to the official post from the PegNet developers, mining is currently on the testnet and will move to mainnet on August 20th, at which point Windows and Linux miners will also be provided.

PegNet is a fully auditable, open source stablecoin network using the competition of PoW and external oracles to converge on the prices of currencies and assets. Anyone can mine the PegNet token (PEG) which is set up to be converted into other PegNet assets in the future.

The PegNet will launch with 32 assets including 16 major currencies, 4 metals, and 12 cryptocurrencies. Each of these assets stands alone as a cryptocurrency token in the market, and are designated with a leading ‘p’. For example: pUSD is pegged to the US dollar.

To bootstrap the network, the value of PEG will be pegged to 1 to 1 with the aggregated value of all the assets on the network. After PEG is listed on exchanges the peg will be removed and the PEG price will be allowed to float according to market prices.

Reserve based assets do not support the conversion between assets. The user is restricted to the liquidity of the reserve assets held on an exchange. The same is true for Ethereum smart contract-based stable coins. Further, reserve-based coins are not decentralized, and their viability is defined by the banks and institutions that hold their reserves.

Smart contract based stable coins are decentralized to a great degree, but involve leverage contracts that achieve stability through liquidation when the market pressure is forcing asset prices down. Further, smart contract coins are very complicated and it is hard to understand their implementation.

The PegNet only provides conversions between pegged assets. This is something neither reserve tokens or smart contract tokens can do: provide for payments and payment services, is decentralized, and works in bull and bear markets. 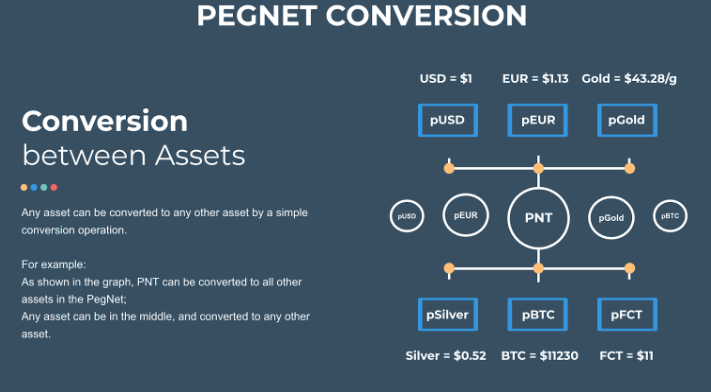 Price stability will be performed via arbitrage. For example, on an exchange, if pUSD dropped to $0.95, then it could be purchased at the discount (thus raising the price) while simultaneously burning pUSD at the $1.00 set by the external oracle within PegNet. With arbitrage, the profits can be left in any asset on the exchanges, such as USD, BTC, or any other asset.

The block rewards will be 5,000 PEG to 10 different miners. The best miner receives 800, second receives 600, and the other eight receive 450. Block times are 10 minutes (the block time of the Factom Protocol which PegNet is built on top of). The reward per block is not reduced over time.

Being that PegNet runs on the Factom blockchain, it requires a Factom Node and relies on Fatom Entry Credits in order to perform the mining action. It also requires access to APIs that will allow requests for real-time exchange rate data.

Using the Factom Protocol, a PegNet Chain will be created that defines the assets to be tracked. PegNet will operate a decentralized exchange and will include a native wallet and explorer. Prices are reported by the PegNet mining community.

For more information, check out the PegNet FAQ. If interested in learning how to mine the PegNet system in preparation for mainnet launch, see the testnet docs on GitHub.

Factom Protocol, an enterprise-grade platform for efficiently building blockchain solutions, has announced that HealthNet, a population health data-sharing platform, will launch this spring on the Factom blockchain. Developed by Consensus Networks, an Authority Node...

Factom Protocol, an enterprise-grade platform for building blockchain solutions, today announced that Off-Blocks, a digital signature provider, has launched its platform on the Factom blockchain. Using blockchain-based IDs, the Off-Blocks platform can interact with...

Avanta Risk Management, a property technology company specializing in data acquisition, analytics and services for the real estate industry, announced today that it recently went live with resBlock 3.0. This release completes the first...

The Department of Homeland Security (DHS) Science and Technology Directorate (S&T), today announced it has awarded $197,292.00 to Factom, Inc. based in Austin, Texas, to develop a blockchain security system that agencies can use to...