The test began in May and was completed in early July to prelude the launch of bloXroute’s BDN in Q3 2019.

For the test, bloXroute partnered with the largest bitcoin miners and mining pools including BTC.com, F2Pool, Rawpool, and Great North Data to measure performance with and without bloXroute under circumstances that closely mirror the real world.

The test consisted of two phases:

Eyal Markovich, COO asserts: “Knowing that block propagation improvement is key to the success of miners, we wanted them to be the first to test the BDN. We were very happy to see such eagerness from leading mining pools to partner with us.”

During testing, bloXroute generated 21 million transactions on the testnet network to encourage larger blocks and ultimately over two hundred and fifty 32MB blocks were mined by participants. Results show propagation times to China ranging between 2-18 seconds on large blocks with bloXroute, compared to up to 185 seconds without.

Note: Propagation times include block validation, which has taken between 1-5 seconds on large blocks.

Eyal Markovich, COO, further explains: “These results demonstrate the BDN’s ability to allow miners to hear about and send large blocks faster and enable them to mine more efficiently. Going into testing we had an idea where we would bring value, but we also found other use cases such as helping the network recover from forks faster, enhancing the performance of Compact blocks, and improving propagation to China. This improvement of performance in China is very important to the ecosystem since many miners are located in China ”

China showed the largest improvement in propagation time; a node in Beijing received and validated 32MB blocks from its peers between 17 – 151 seconds, but using the BDN the same node received and validated large blocks in just 3.4 – 7 seconds. Charles Yu, F2Pool COO, comments: “The result from BCH testnet looks great! The latency has been reduced dramatically, especially when the blocks were large.”

David Li, YeeCo CIO, and Rawpool Founder, adds: “After close collaboration with bloXroute on BCH test, I’m very excited about the result! We’re also impressed with the capability of the bloXroute team and look forward to an even better outcome after the mainnet launch.”

Full results of the test are published on bloXroute’s Medium.

Below are highlights of the project: 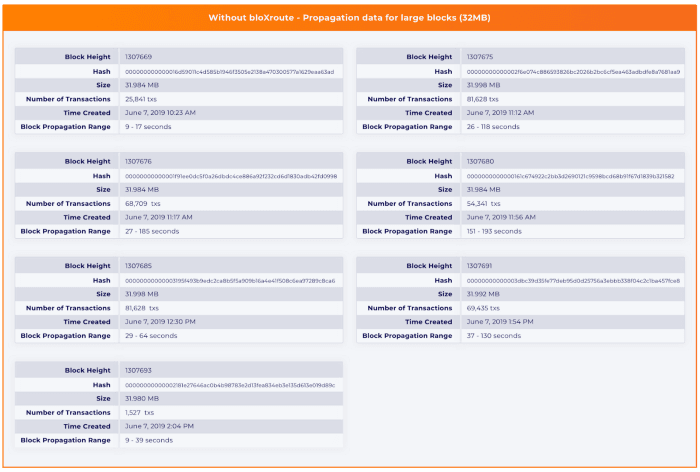 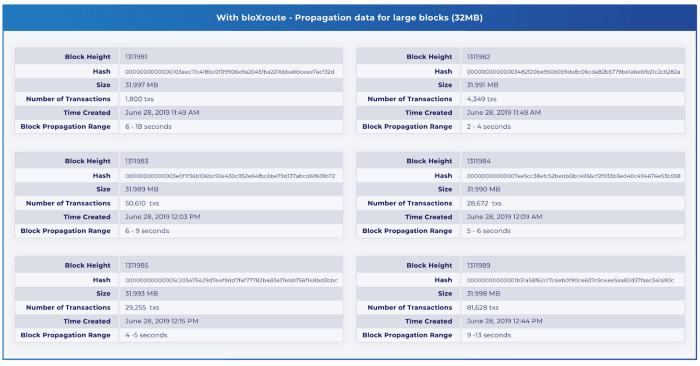 bloXroute Labs, creators of the Blockchain Distribution Network (BDN) launched v1.5 in Q4 2019, and has now delivered the first major upgrade to the network since then: BDN v1.6. BDN v1.6 focused on improving...

bloXroute Labs, a technology start-up and creators of the Blockchain Distribution Network (BDN), a unique solution that allows blockchains to scale, announced today the official launch of BDN Version 1. The launch follows several...

bloXroute Labs, a technology start-up that built a Blockchain Distribution Network (BDN) to scale all blockchains, announced today the next set of projects BDN will deploy on including: Ontology, Quorum, and Metadium. The news...