The team behind Muun, a Bitcoin and Lightning wallet application available on Google Play, today announced that users can now make non-custodial Lightning payments. It requires zero channel configuration: all users need to do is make sure there is bitcoin in their wallet and scan the Lightning invoice to pay. Muun will automatically recognize it as an off-chain invoice and guide users all the way through the payment.

Under the hood is a payment flow that consists of a submarine swap. Submarine swaps allow users holding on-chain bitcoins to pay off-chain invoices through a swap provider. The swap provider doesn’t have custody of funds at any moment. This technology was created by Olaoluwa Osuntokun and Alex Bosworth from Lightning Labs.

Users will still have funds in one single wallet in Muun, and the whole payment process is the same as an on-chain payment, except for two differences: 1) most payments will be done instantly 2) different fees will appear in the user’s transaction detail.

On the payment details screen, users will see two different fees: 1) “Lightning fee” is the routing costs of the off-chain component of the payment, and 2) “Swap fee” includes the first on-chain transaction to the swap provider: 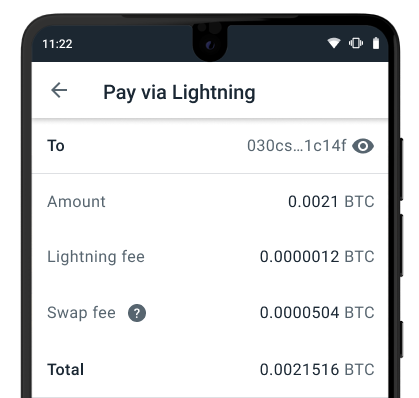 “So far, the market has been experimenting with trade-offs between usability and non-custodianship. The first Lightning wallets gave up usability, in terms of channel configuration, in exchange for non-custodianship. The more recent wallets sacrificed non-custodianship in return for zero channel configuration. In this implementation, the trade-off is in costs since transactions still pay for an on-chain fee. In talks with users, we learned that the current motivation for paying in Lightning is to learn about and support the technology. Therefore, we thought this was a reasonable trade-off for the first implementation. At Muun we are working hard to release a full Lightning wallet: non-custodial, with great user experience, and cheap and fast transactions. Because Lightning is in its early days, it will take some time until we reach there. We are okay with sacrificing some aspects, as long as the overall experience is good and we do not compromise on our core values such as non-custodianship.”
– The Muun Team

The team of Muun, a self-custodial wallet for bitcoin and lightning, has announced that Muun is moving to a new open-source model. As of now, Muun's native Android and iOS apps can be entirely...