Mainframe, a web3 platform for unrestricted and ‘unstoppable’ applications: resistant to trackers, hackers, gatekeepers and censors, today announced a major milestone with the live public release of the Mainframe OS.

Mainframe OS is a platform for end users to find and use dapps, and for developers to build and deploy dapps. Mainframe OS provides users with the elegant and cohesive UI comforts they have come to expect from a modern platform. Users can manage identity, wallets, contacts, and other security features in a single, integrated experience.

Mainframe OS takes care of all underlying web3 infrastructure and services, removing friction and making blockchain functionality accessible and seamless. Mainframe OS is not an operating system in the standard sense. It is actually an application that is available on MacOS (other platforms supported soon).

The Mainframe team calls it an OS because 1) it has system-level utilities similar to other OS’s (namely integrated decentralized identity, contacts, and wallets), and 2) once installed and running Mainframe OS, users can then discover, install, and run dapps within that environment. So it is essentially an “Operating System for decentralized user experience.”

Mainframe OS comes pre-built with several dapps. Some are intended for exploration, inspiration, and reference, and others provide access to decentralized finance protocols.

What dapps are included?

There are seven “suggested apps” included currently in Mainframe OS. 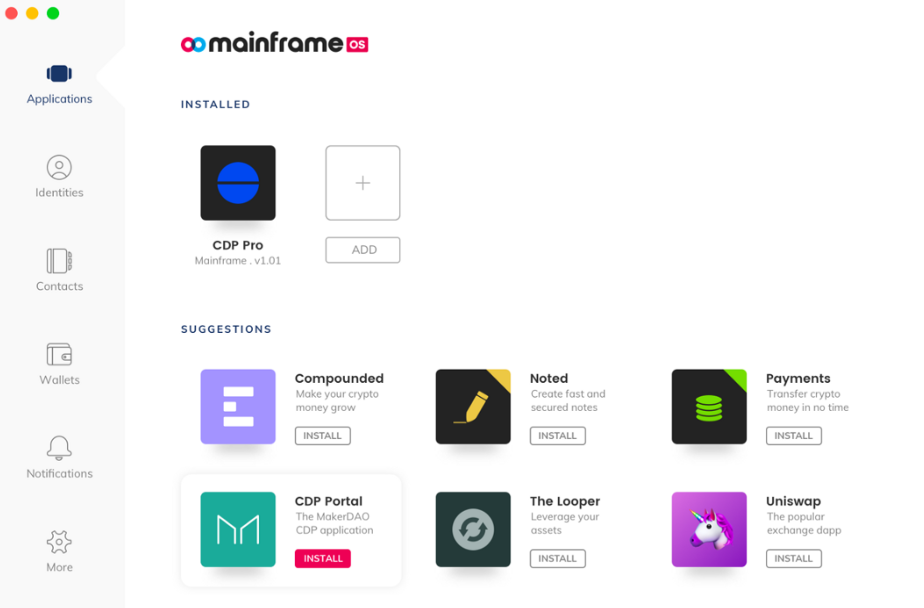 Dapps are not published or accessed in the traditional way, from a web server that is vulnerable to attack and is a single point of failure. Once a dapp is published in Mainframe OS, it’s out there in the immutable decentralized Swarm network and cannot be “stopped” (i.e. deleted, censored, blocked, etc).

Mainframe provides a mechanism for dapp developers to deploy updates to a published dapp and for users to easily upgrade, but even then, the old versions actually are still out there.

What blockchains does Mainframe OS support?

Mainframe SDK is currently only integrated with Ethereum. However, the underlying service architecture is designed to be modular and pluggable, able to integrate with any other blockchain. No matter where the industry goes, Mainframe intends to support the popular blockchains and programming languages, so builders can use it anywhere.

How does MFT integrate with Mainframe OS?

MFT tokens are integrated into Mainframe OS to power underlying services. In this initial release, users can stake MFT to send invitations to other users to connect.

Coming soon, developers can stake MFT to submit their dapps to be included in the Mainframe App Store. The team is also exploring subscription models for app users and developers, facilitating in-app purchases or upgrades, and tiered/paid dapps, all powered by MFT.

As additional underlying services are enhanced to include incentivization functionality, MFT will be integrated more and more to power those services and create a seamless experience for users.

Mainframe, the censorship-resistant web3 blockchain platform for building decentralized applications today announced a partnership with Telefónica, one of the largest Spanish multinational broadband providers. The joint initiative with Telefónica’s innovation arm, known as Wayra, will...

Mainframe, the creator of a decentralized application platform that aims to be censorship and disruption resistant, today announced a donation of 1,000 ETH from its Proof of Heart Community Campaign to the Freedom of...