There is no denying the crypto bear market has affected all involved in the space. On one hand, it has had the negative aspect of slowing engagement and the general adoption of crypto. On the positive side, however, it has had the effect of pruning out the projects with relatively mediocre use cases, while allowing the true gems of the industry to shine in all their unique glory. Many of these gems continue to garner enthusiastic participation as the foundation for the future general adoption and public knowledge of crypto usage continues to blossom.

In one corner of the crypto world, there is an incredible buzz building that is no longer flying under the radar. It’s a place where the atmosphere is so charged with excitement and energy that people forget they are stuck in the teeth of a grizzly bear market. That place is Hxro (pronounced Hero), where skill-based social gaming meets the crypto markets.

Hxro Games quietly launched a private beta January 1 with 30 members of the crypto community, including top traders, podcasters, and crypto enthusiasts alike. That was the only “quiet” part of this project.

Within hours of the private beta launch, Hxro players were proclaiming their addiction to MoonRekt, Hxro’s first game offering. In the following days and weeks, the early users unlocked the ability to invite more users to test the game, and soon there were a few hundred players on the platform, with CryptoNinjas being one of them.

User engagement statistics are through the roof, as players spend multiple hours of their day choosing Moon or Rekt in 5-minute games that induce adrenaline pumping mania. Many participants have continued to exclaim how their days have changed, glued to their phone and computer screens throughout countless five-minute intervals of price action and social interaction. Some players have logged over 12,000 completed games since January 1, an almost unbelievable number. There is something to be said for a project that can truly flourish within the holds of a long crypto bear market. One of the most unique aspects of Hxro gameplay is the fact that while the daily candle on a BTC chart may only hold lackluster sideways movement, the five-minute MoonRekt contests continued to have the volatility in pennies and dollars that induced a furious amount of action and thrills. In the five-minute games, Hxro players wager on whether the price of BTC will end the five-minute contest higher (Moon) or lower (Rekt) than the opening price of the game. 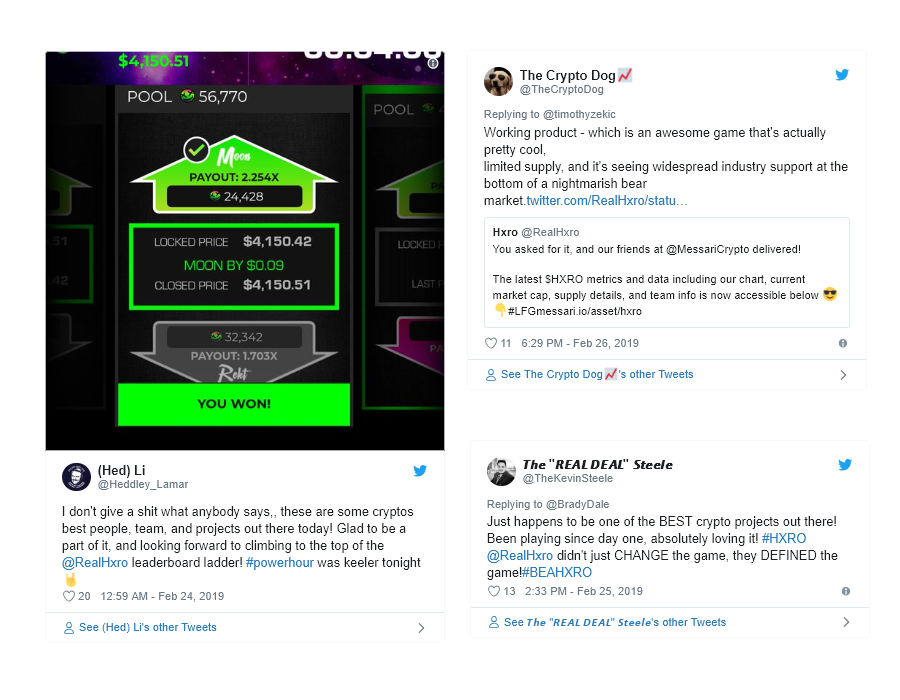 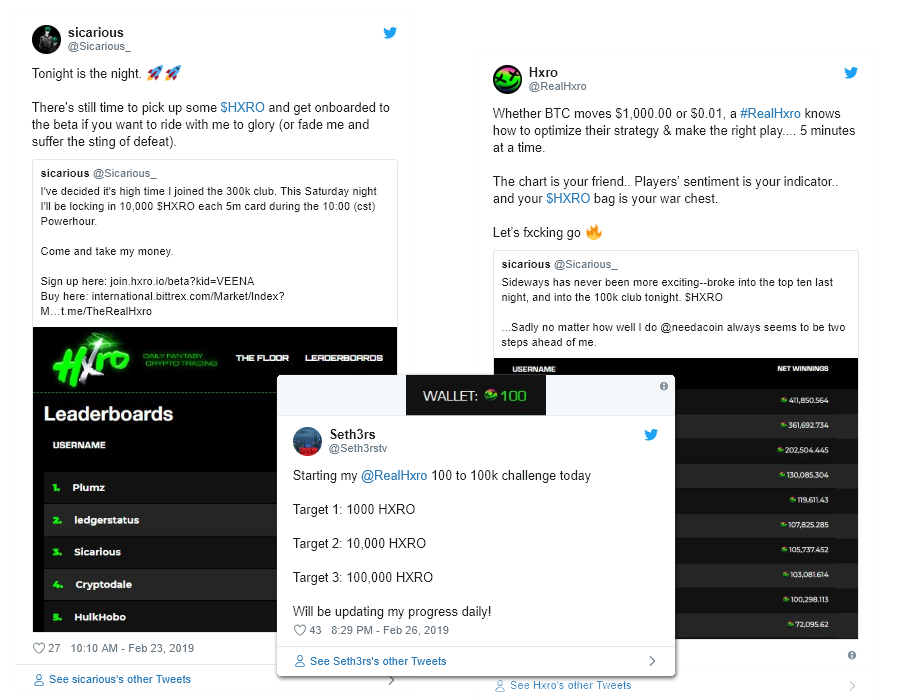 The beauty of Hxro is that with each contest (5-minute candle on the chart), users can use as much, or as little, technical analysis and gut instinct to strategically predict the outcome based on trends in the chart or sentiment of the crowd.

Strategic, research-informed wagers are nothing new to the online arena, or even the crypto space. With that said, the biggest focus I’ve seen with Hxro is the quick and easy accessibility it brings to those with varying amounts of experience within the blockchain or crypto trading space. That open accessibility is what truly drives general adoption and allows an ever wider demographic of users to whet their appetite and cut their teeth on opportunities afforded to them through the platform.

Many people that originally became involved with crypto learned early on that trading came with innate risks, necessary research, and loads of volatility. For these users, while traditional currency trading may not be their favorite mode of operation, Hxro allows them to quickly and easily jump into the action with simple contests based on short time periods of BTC movement. The true skill-based research, however, allows for an even fuller and more developed strategy to develop while utilizing the Hxro platform.

The simplicity of the MoonRekt is a sight to be seen, in fact, some of the key aspects include:

Get in the Game.

The Hxro project is founded by a well-rounded team, with years of successful experience in trading, finance, professional poker, software development, and data analytics. The team utilized the development studio led by one of the original engineers that built the DraftKings application, the most successful daily fantasy sports platform in North America. Honestly, this aspect shows in the vision and construction, especially given the team’s plans for additional games for launch within the Hxro platform.

Of specific note, MuhBags is poised to add even more adrenaline pumping action to the Hxro platform in the coming months. 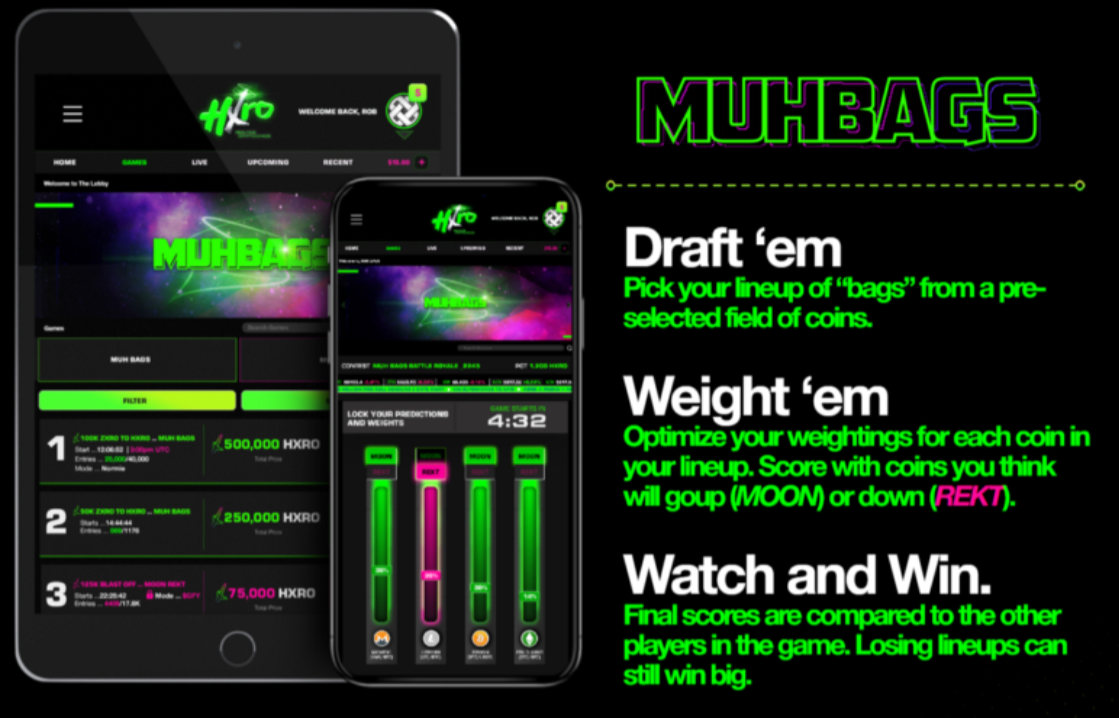 Pick your lineup of “bags” from a pre-selected field of coins.

Optimize your weightings for each coin in your lineup. Score with coins you think will go up (MOON) or down (REKT).

Final scores are compared to the other players in the game. Losing lineups can still win big.

Here you begin to see much more of the drafting experience that the general public is familiar with. As it stands, the Fantasy Sports industry alone continues to grow year over year, with accepted general audience knowledge and participation known the world ‘round.

Evolving this gaming aspect to the crypto industry is simply the next logical step in building upon existing principles, while bringing knowledge and experience of crypto to an even wider, diverse and vast consumer base.

While the Fantasy Sports industry was once looked at as a niche market with limited possibilities, it has itself grown into a massive, worldwide industry, with nearly everyone you ask having at the very least heard of, or actively participating in these activities.

The same can be said for the possibilities in crypto, with Hxro Games as the true front facing contender to cement itself at the forefront of the minds of crypto users first, and next, a much wider general audience for participation.

Whether the bear market has you hunkered down waiting for the eventual bull run, or you have been able to continue to profit and trade with expert precision, Hxro offers you a home for an alternative method of earning tokens while most importantly returning a sense of fun and excitement that we haven’t seen for quite some time in crypto.

These are the only official, trusted sources of information about Hxro Games:

HXRO, a crypto trading platform that offers users an uncomplicated way to play the markets, has chosen Solana as its L1 blockchain partner, to help it move to a fully decentralized trading network powered...