After a week of consolidation, bitcoin is currently trading at $3,620.

The price made several lower highs earlier in the week and has since coiled within a symmetrical triangle above the support level at $3,500.

Tightly bound by buyers and sellers on each side, bitcoin now finds itself poised for a breakout — either to the top of the range at $3,700, or the bottom of the range at $3,500. A breakthrough either of these levels is likely to yield a strong continuation in the same direction.

On the bearish side, the sideways action this week has been supported by little volume, showing lack of strength and interest in the market, and suggesting that a strong catalyst is needed for a push upwards. This is supported by the RSI which is currently sinking below the bull/bear line at 50.

Away from the charts, news has been bullish, with several over-the-counter trading firms —like Genesis and Cumberland — reporting record trading volumes from institutions purchasing large amounts of crypto.

As we inch closer to the apex of this symmetrical triangle, a conclusion could be expected soon.

It has been an uneventful week for the yellow metal, which remains stuck in the same narrow channel, with buying and selling constrained against the $1,297 level that has now been in play since January 3rd.

Despite geopolitical turmoil in both the US and UK, with PM Theresa May surviving a no-confidence vote, and the US government shutdown dragging on, gold has lacked the catalyst to push up through $1,297-$1,300 level. Instead, the metal started to fall on Thursday on news that the US is considering easing tariffs on Chinese products, boosting investors risk appetite and triggering a rally in equities. Stronger than expected US jobless claims data also boosted the dollar, creating further headwinds for gold.

Looking ahead, a move through the $1,297 resistance line at the top of the bull flag will indicate buying pressure and is likely to lead a retest of $1,300 level. Beyond that, further resistance can be found at the June 2018 highs of $1,310. This bullish picture is reinforced by a golden cross which formed earlier in the week as the 50-day moving average (orange) crossed the 200-day moving average (blue).

If the present pullback continues, then strong support can be expected at around the $1,280 level, and then $1,268. 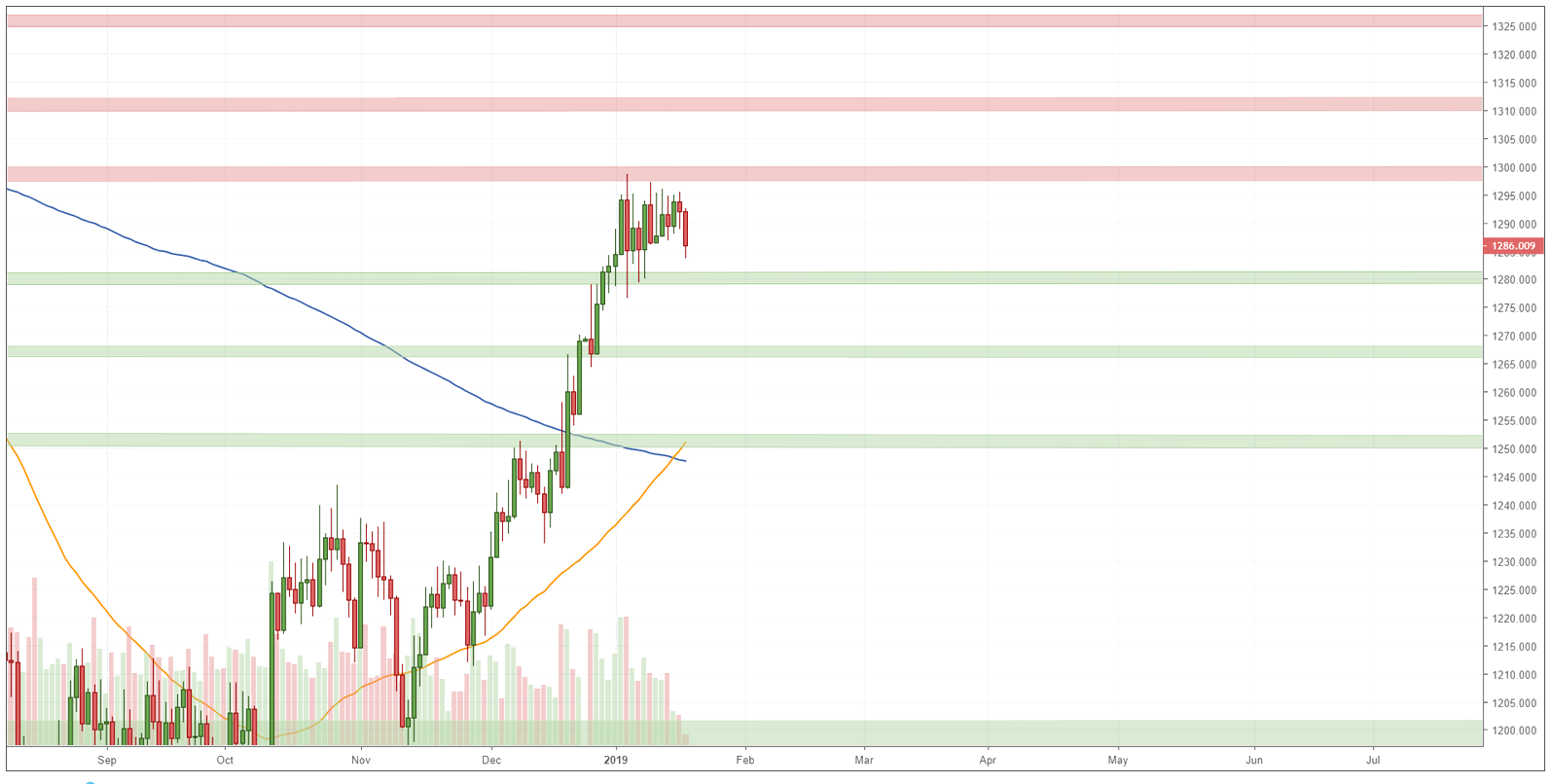 Vaultoro, the cryptocurrency-based commodities exchange, has announced that users can now trade Ethereum with physical allocated gold and silver. Vaultoro supports an ETH wallet to deposit ether for trade with precious metals. Every verified...

Vaultoro, the first real-time bitcoin/gold exchange, has freshly published a Q1 2020 company roadmap. And the new year will bring many enhancements to the crypto commodities exchange. After a busy 2019 in which Vaultoro...

Vaultoro, the market’s first gold crypto-hedging solution since 2015, released today a revamped version of its commodities exchange based on a new C++ modular engine optimized for high-frequency trading, clocking up to 1.2 million...

Vaultoro, the gold/bitcoin-based exchange, today announced the beginning of a pre-launch for its new membership token, VAULT. From today August 15th to September 4th, VAULT will be exclusively available for members of its referral...