DEIP, a decentralized research platform has announced the launch of its blockchain for science research in test mode for September 6th. The platform aims to transform the industry for scientific funding, saving up to $400 billion for its major stakeholders and allowing scientists to fundraise for their projects.

Research project as a digital asset

On the platform, scientists can conduct research and fundraise for it even on early stages. Each research is assessed by a decentralized community of scientists. The results of the assessment can be further used by investors for an efficient and reliable screening of research projects. With this data put on the DEIP smart-contracts, the entire investing process could be automated. For the research funding market, just this could save up to $400 billion in operational costs. 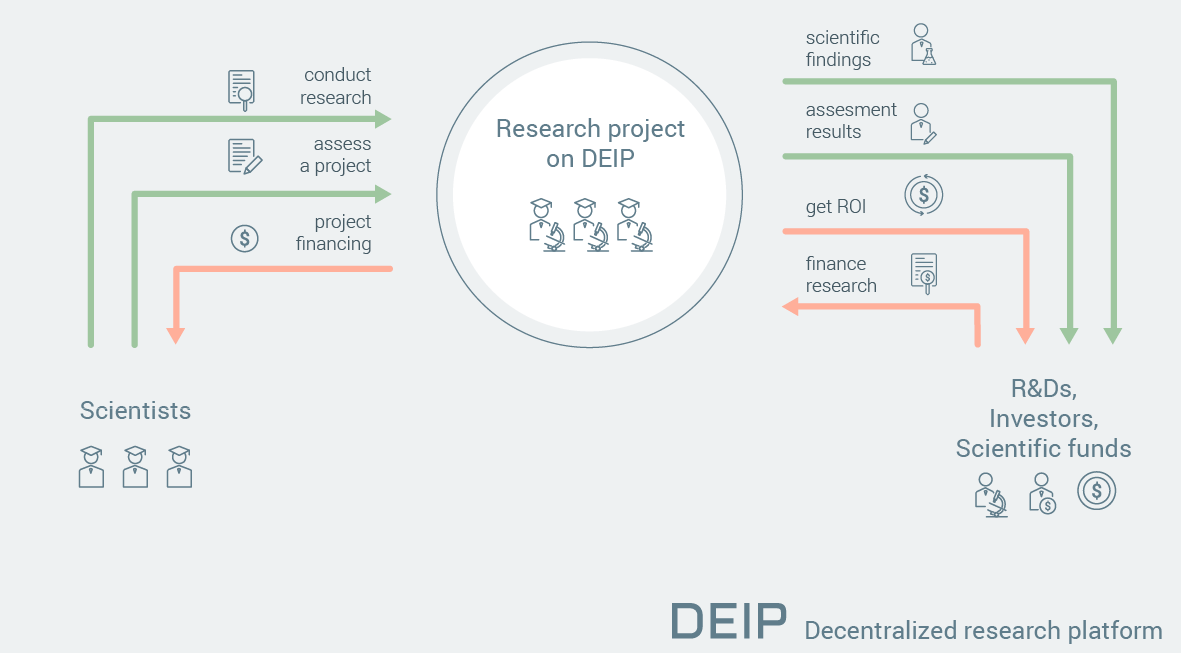 This approach makes research projects more self-sustaining, democratizes science and makes it more accessible for everyone.

The DEIP protocol is developed and self-financed by a team of engineers and scientists from Belarus, headed by Alex Shkor – DEIP CEO and a blockchain architect, whose previously developed blockchain Scorum is among top 15 most used in the world. The DEIP protocol has been designed specifically for the needs of scientists and provides them with opportunities not to be found in the current centralized system.

The DEIP governance model is delegated – scientists vote for block producers who maintain the platform on their behalf by signing transaction blocks. To enable this model, DEIP introduces their own consensus algorithm – Delegated Proof of Expertise Contribution (DPoEC).

After a research paper has been published on the platform, it starts getting reviews and assessment by scientists in corresponding fields. If positively assessed, the paper is rewarded with DEIP Tokens – the internal currency of the platform which is emitted dynamically, proportional to participants’ scientific activity on the platform.

Moreover, the author of the paper gains recognition for a contribution of expertise and is rewarded with Expertise Tokens.

Thus, the DEIP protocol incentivizes its participants to make more and better quality contribution to science, which is missing in the current centralized system because of conflicts of interests between its stakeholders.

This creates a fundamentally new market of early-stage investment into scientific research, allowing investors not to wait for liquidity of their investment for years. Research Tokens could be sold on secondary market right away, and if their price has grown, an investor can make upside even in a very short term.

The ecosystem for scientific data based projects

DEIP provides a system of smart contracts that allow users to build their own decentralized protocols and applications, using the infrastructure and data stored on the DEIP blockchain. It can be information from researchers’ personal profiles, the results of the decentralized assessment.

Not publicly available yet, smart contracts are already used for building some projects. An example of such is Syntau – a decentralized system of management of gene manufacturing. The decisions on adding some genes to a restrictions list are taken by voting with DEIP Expertise Tokens.

For the DEIP testnet participants

DEIP invites blockchain enthusiasts, developers and scientists to run node, simulate transactional activity and contribute to the future of science by improving the protocol. For this, create an account and see the instruction on participation on DEIP, an instruction is also available via Github.

DEIP, a Web3 domain-specific protocol that enables the discovery, evaluation, licensing, and exchange of intangible assets such as intellectual property, announced today it is partnering with Human Guild, a Web3 project that aims to...

DEIP, a creator economy protocol that enables the discovery, evaluation, licensing, and exchange of intangible assets, and BlockVenture Coalition, an alliance of university blockchain groups and venture funds, announced today a new partnership to...