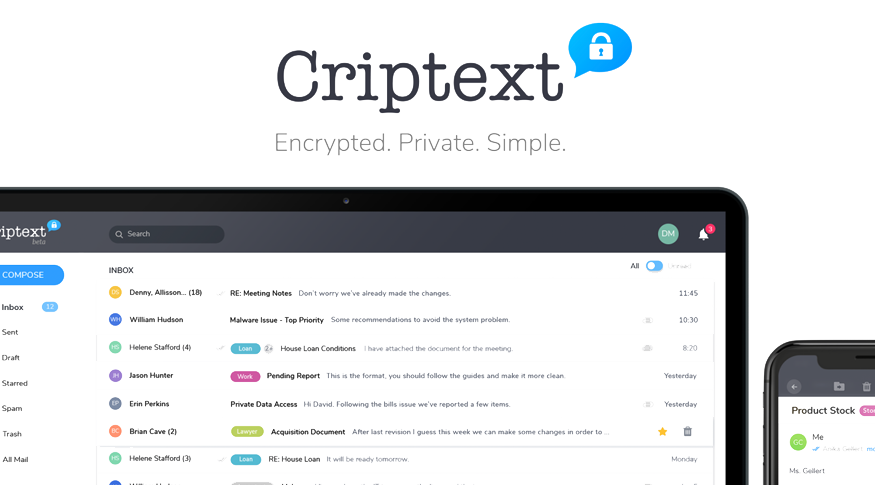 Criptext, an encrypted email platform founded in a Colombian prison, is launching the beta version of its hyper-secure email service.

Criptext utilizes end-to-end encryption based on the open source Signal Protocol library to provide users with an email service that operates as a safe and private space for data-sharing and information exchange between two parties.

The beta launch is an open-source project that provides complete transparency to users and will allow the community to play an active role in the development process of Criptext as it works to reach a v1 launch.

Criptext refrains from collecting or storing users’ data within its servers, giving users complete control and ownership over their data by storing it entirely on their devices. The platform is built on the premise that the less data collected from the user, the more privacy users’ have.

Criptext offers its users the option to unsend emails after they’ve already been read by the recipient. It also offers real-time email tracking and allows users to see if an email has been read. Through these features, Criptext is giving control back to individuals who value their privacy and is a proactive solution for companies sharing sensitive and confidential materials within their network.

Big data companies and government institutions are now infamous for collecting our personal data and surveilling our internet activities. Governments and companies often misuse users’ personal data for their own gain. This lack of privacy threatens our freedom of speech, which is the glue to holding our institutions accountable and key to a strong democracy. Internet users are growing increasingly aware that their private domains have been breached, with sensitive information shared across email and text being accessed by unpermitted technology companies, service providers, and the Government agencies. In a world where everyone is engaging in more digital conversations than physical ones, Criptext protects the privacy of email conversations by encrypting emails from end to end and never storing users’ email data.

“As a victim of government persecution, I know first hand the importance of privacy and confidentiality in everyday conversations. At Criptext, we’re creating a digital space that enables email exchanges to be as private as one-on-one conversations. The beta version of Criptext will serve as a promising step forward in our development, as we continuously work towards our goal as the most private email experience available.”